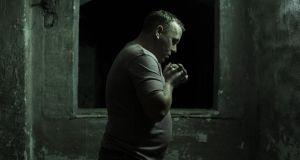 Project Arts Centre, Dublin
★★★★☆
The latest work from the seriously irreverent contemporary theatre company Brokentalkers begins with a smack of betrayal. Interviewed for this probing take on healthcare in the Irish Prison Service, staged with the school of history at University College Dublin, one prisoner asks simply for humane treatment, to be seen “not as animals in a cage but as human beings”. What would he think now to see the lights come up on a figure trapped behind a desk, in a full gorilla costume?

So begins a more politically sly and artfully provocative piece than you might expect for a show developed as part of an academic research project. Its uncanny balance is embodied best by the man finally revealed within that suit, Willie White, a stand-up comedian (here playing it very straight) with some personal experience of incarceration. Fittingly, his costume is somewhere between a joke, a protest, a punishment (“You must be roasting,” White is later told) and an even more uncomfortable projection. Is this society’s image of prisoners?

White is joined on stage by Gary Keegan, codirector of this production (with Feidlim Cannon), who appears in a dapper suit to share much uglier ideas. These belong to the 19th-century quack theorist Cesare Lombroso and are about “the born criminal”, so patently ludicrous that the way our own prejudices go unchecked becomes the stealth theme of the short performance.

Some sentiments might sound like a survey of the opinions of late-night talk-radio callers, but Gary Keegan’s position teases open thornier questions behind crime and punishment

Take slopping out, a widely condemned practice still the subject of human-rights litigation in Ireland. White recalls the revolting, demeaning ritual in numbing detail, somehow made more vivid by Keegan marking the path from White’s cell to sanitation on the table with his finger.

Rather than pander to right-on politics, though, the show injects a much more fascinating tension. Keegan, by turns resembling a brusque interrogator or mild tormentor, relates his own experience of being savagely attacked years ago by a gang never apprehended. Some sentiments – bemoaning quinoa diets and flat-screen TVs for inmates, for instance – might sound like a survey of the opinions of late-night talk-radio callers, but Keegan’s position teases open thornier questions behind crime and punishment.

“I want the little bastards to suffer,” Keegan says of his assailants. “An eye for an eye just leaves everybody blind,” White counters.

As the testimony of others is shuffled into his own experiences, describing the complexities of a medical emergency on a prison ward, or the capacity for “a dangerous man” to reform, or the reflex to throw medication (in literal fistfuls at one point) at mental-health issues, the statement is by no means glib.

Artfully enlivened by supple animations, illustrated by Gareth Gowran and projected on the sliverlike structure of Ger Clancy’s set, that makes for a disarming and involving experience of confinement. Wisely, too, the show offers no easy escapes: both the health provisions of prisons and our own ideas of punishment and reform need careful and constant examination.

Performed next at Axis, Ballymun, Dublin, on Friday, March 8th