Roger Casement is (again) centre stage, but this time it’s the dance world that’s exploring the many facets of his life 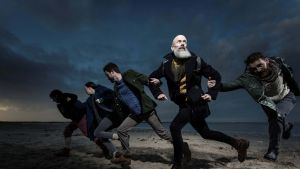 In the context of the remembering of 1916, in Ireland and the world, Butterflies and Bones is a dance theatre work shaped and sustained by the complex, heroic and contradictory life of Roger Casement: knight of the British Empire, outspoken international humanitarian, Antrim Protestant and rebel nationalist of his native Ireland. As each of the six lithe performers, four men and two women, quietly declares “I am Roger Casement” we are at the heart of Fearghus O’Conchúir’s mostly realised choreographic intent: to create a highly physical and visual performance where dance embodies and explores the multiple meanings of that life. This incorporates the symbolic, the gendered and the social aspects, then and now.

We begin at the end of a beginning: the exhumation of Casement’s body in Pentonville Prison for return to Ireland. O Conchúir’s recorded voice recounts the clinical uncovering of fragments of the quicklimed hanged body, with a disjointed list of ribs and vertebrae. On stage, an awkward solo is embraced into a healing ensemble phrase, featuring Mikel Aristegui, Theo Clinkard, Philip Connaughton, Bernadette Iglich, Matthew Morris and Liv O’Donoghue. The performance intimates the relentless parsing of Casement’s life, from vilified personal sexual history to emerging cultural nationalism, not in splinters but as a unified experience.

Dancers in T-shirts emblazoned with phrases from the ever contested Black Diaries, bring both visceral and delicate movement to cramped homosexual encounters, evoking both tenderness and urgent fulfilment. But, they move also to the different free-flowing grounded rhythms of the Congo or the Amazon, lands of heat and dust and exploited landscapes.

These are summoned by Ciaran O’Melia’s evocative lighting and simple staging and the outstanding sound design of Alma Kelliher. Later, as we move to the events of Easter 1916, her pacy design of single separated shots of the executed 1916 leaders is set against thundering artillery fire and we are immediately drawn to the fields of the Somme.

The dancers’ bodies and the staging all play transformative roles, most strikingly when Matthew Morris’s body bursts out of its clothing chrysalis into a mesmerising image of painted body art. Stacks of speakers are constantly shifted around, sometimes emanating sound but more often reconfigured as pieces of landscape, corners of concealment or mountainous piles of rocks.

Even the backdrop is whipped down to become a ship’s sail and in the final redemptive moments the floor of brown paper billows and falls, when lights on a horizon hold promise and dreams seem still alive.