Brian Friel’s ‘Dancing at Lughnasa’ Donegal cottage to be preserved 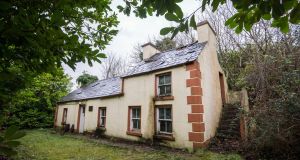 The Laurels cottage in Glenties, the original home of the five Mundy sisters where Brien Friel played as a child and set his play ‘Dancing at Lughnasa. Photograph: Brenda Fitzsimons 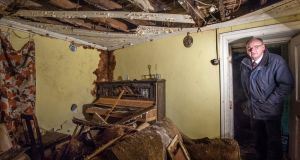 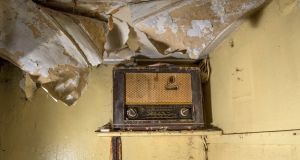 A radio sits on a shelf in the Laurels cottage in Glenties, the original home of the five Mundy sisters where Brien Friel based his play ‘Dancing at Lughnasa. Photograph: Brenda Fitzsimons 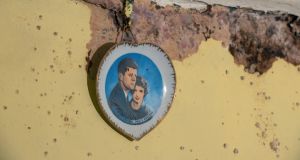 A souvenir plate of US president John F Kennedy and his wife Jackie in the Laurels cottage in Glenties. Photograph: Brenda Fitzsimons

The Donegal cottage that was the setting for Brian Friel’s Dancing at Lughnasa is to be preserved and will form eventually the centrepiece of a planned Brian Friel Centre, in honour of the playwright who died last year.

The cottage has been bought by Joe Mulholland, the former RTÉ executive and director of the MacGill Summer School, working with Francis Brennan, a Glenties estate agent and long-time admirer of Friel’s work.

Ownership of the property is to be vested in a Brian Friel Trust which Mulholland is setting up and on which both men will sit. The other members are RTÉ chairwoman Moya Doherty; Orlaith McBride, director of the Arts Council; Noel Pearson, theatre and film producer; Tom Kilroy, playwright; Mary Finan, public relations executive and Gate Theatre board member, Joe Dowling, theatre director; Michael McDowell, barrister and former politician, Séamus Neely, chief executive of Donegal County Council; and Mary Friel Bateman, one of Brian Friel’s daughters.

Funds to buy the property (for a five-figure sum) were provided by a donor who wishes to remain anonymous.

The cottage was the home of Brian Friel’s grandfather, Barney McLoone, and his wife Sarah. It was originally railway property and Barney worked at the nearby station in Glenties.

The couple had 10 children, including five girls, one of whom, Chris, married Paddy Friel. They were the playwright’s parents.

The five McLoone sisters were immortalised by Brian Friel in Dancing at Lughnasa as the Mundy sisters of fictional village, Ballybeg.

Friel acknowledged his debt to the McLoone sisters in the play’s dedication, describing them as “those five brave Glenties women”.

The play’s other central character, Fr Jack, just back from mission work in Uganda and dying, was based on one of their five brothers, Fr Barney McLoone, Friel’s uncle.

The cottage is now derelict, its cultural significance betrayed only by a small polished stone plaque beside the main door. “The Laurels”, it proclaims, adding that the stone was unveiled on September 24th, 1998 by the playwright, along with Meryl Streep and Sophie Thompson, who had leading roles in the film version of the play, which was given a special showing that day in Glenties.

The play is set in the kitchen and adjoining garden of The Laurels. It explores themes including disappointment and jealousy; love unfound, as well as experienced but lost; the exuberance of youth versus small community convention; and, above all, the tensions between conventional Christian rites and those associated with both pagan and African beliefs.

Today, the property, which stands on about an acre, looks from the outside like many other abandoned rural homes under attack from the elements. The walls are covered in mould, the frames of the sash windows rotting, the roof has collapsed in places, slates are missing, and the weather is eating away inside.

In the play, most of the action takes place in the kitchen.

“The room has the furnishings of the usual country kitchen of the thirties,” instructed the playwright in his set notes, “a large iron range, large turf box beside it, table and chairs, dresser, oil lamp, buckets and water at the back door, etc, etc. But because this is the house of five women the austerity of the furnishings is relieved by some gracious touches – flowers, pretty curtains, an attractive dresser arrangement, etc”.

Today, the interior is truly a derelict mess. The first floor in the two-storey extension has collapsed. Such furniture as remains has toppled over or is slowly rotting, beaten down by the rain. Filthy net curtains barely cling to their moorings; lengths of architrave have collapsed and much of the single storey ceiling has fallen in.

Items from former times remain in the debris. They include a John F Kennedy and Jackie Kennedy love plate, a Child of Prague statue, an Our Lady of Lourdes holy-water bottle and an old radio.

In a corner of one room, there’s a debris strewn piano that could well date back to the 1930s, the decade in which the play is set. Poised precariously in the collapsing attic is a rusting metal trunk – believed to have belonged to Fr Barney – the same trunk used by the fictional Fr Jack to bring home his belongings, including his improbable colonial hat, back from the missions.

The last McLoone sister,Maggie, lived in The Laurels until her death in the late 1950s when a local family, the Boyles, bought the property.

“Brian visited the house often as a boy and was very attached to it,” says Mulholland, “and had many stories about his aunts.”

When Friel was dying last year, Mulholland, anxious that such an important physical part of his legacy in Glenties be preserved, approached the then owner of the cottage to see if he would sell.

“He was extremely courteous and very open to my approach,” says Mulholland, adding that the man, who wishes to remain out of the media spotlight, will be able to help recreate the cottage as it was.

Mulholland hopes some restoration work can be done in the spring to secure the fabric of the structure, with full refurbishment complete by the end of the year – funds permitting.

After that, his sights are set on building, beside the cottage, a Brian Friel Centre. It will be a place matching the ambition of the centre that is nearing completion in Ballaghy, Co Derry, devoted to Friel’s friend, the poet Seamus Heaney.

The Friel Centre would likewise be a place where the playwright’s works would be performed and his life’s achievements celebrated.

Mulholland and Brennan are having the property surveyed by local buildings engineer Kevin Brannigan to identify precisely what needs to be done. It will be a lot: there will be no change from €150,000.

Members of the public wishing to contribute should email frieltrust@gmail.com

Hands off the Toy Show: Why the Grinch can’t steal our Late Late Christmas
3