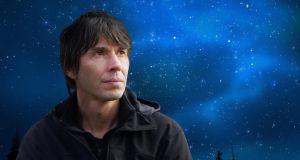 Professor Brian Cox, who says of climate change: “The longer you leave it the more expensive it will be to fix and the more damaging it will be.”

Prof Brian Cox is on the stage in the Olympia and behind him there is a photograph taken by Nasa’s Curiosity rover on Mars, in which Earth appears as a distant blue light in the Martian sky. In his distinct Lancashire accent, Cox reads a short excerpt from Pale Blue Dot, a text written in 1994 by his American cosmologist hero, Carl Sagan.

“There is perhaps no better demonstration of the folly of human conceits than this distant image of our tiny world. To me, it underscores our responsibility to deal more kindly with one another, and to preserve and cherish the pale blue dot, the only home we’ve ever known.”

The crowd cheers and Cox carries on with his live cosmology show, which in the vein of his hit BBC series such as Wonders of the Universe and Wonders of the Solar System, attempts to place ideas of the vastness of the cosmos within our comprehension. The comedian Robin Ince occasionally joins Cox on stage to add some levity. He teases Cox about being “the sexy face of theoretical physics” but Cox’s responsibility, as he understands it, is to play a role in disseminating and democratising knowledge, to make people look up and out beyond themselves.

I meet Cox for a chat before the show. I wonder are these dark times to be a scientist. A certain narrative seems to be taking hold that this is not the age of the intellectual. In the UK, Michael Gove says the British people have had enough of experts. In the US, the election has made that abundantly clear.

“These are dark times, potentially to be in a democracy, never mind a scientist,” Cox says. He firmly believes the solution to be education. “Clearly, in America and I think in Britain as well, what we’ve seen is an under-investment in education. And that means that people don’t know how to think, and that’s certainly not meant to be an insult to anyone: everybody has to be taught how to think. It’s not natural to be able to weigh evidence and to be able to, crucially, realise that you might be wrong about something.”

Despite the massive success of his TV shows and books, the popular scientist continues to teach first-year quantum mechanics at Manchester University. He has even been credited with the “Brian Cox effect”, a significant rise in the number of university physics applications.

“I said last week to our science minister in the UK that I think education is becoming a national security issue now because if you look at what potentially is going to undermine our freedoms in western society it is not an external threat. I mean, there are external threats, but we’ve neglected a whole swathe of our population . . . It’s alright spending billions of pounds on aircraft carriers but they’re not going to matter if you’ve not managed to involve your population in a democracy in thought, you’ve not given them the opportunity to learn how to think. We’ve treated it as optional for too long. We’ve thought, okay we don’t need that many educated people really. But quite rightly everyone has a vote and if you think you didn’t need to educate everyone, now you’re finding out what happens.”

I ask him about the importance of television shows like his among programming awash with Kardashians and Cowells. He sees national broadcasters like the BBC as institutions that exist for the good of the country, acting as a bridge to the public for academics like him. He is concerned that with the new way we watch television, this model is breaking down. “Choice implies ghettoisation to some extent so what we’re also seeing, and we saw it in America with the analysis of Trump’s victory, is these echo chambers where people only choose to listen to people who agree with them.”

Cox trusts in the natural curiosity of the human mind. “Institutions like [RTÉ and the BBC] are a way to counter it. With big, better-funded public broadcasters, people can wander through knowledge. They don’t get ghettoised. They’ll be watching Strictly or the X Factor but somewhere around there, there might a great natural history documentary. We need to be subjected to different opinions so we can see what’s out there.”

There are clips of Cox on YouTube, passionately arguing with climate change deniers, like Galileo all over again. Is he frustrated that its existence continues to be questioned? “The key point is, it is legitimate for society to ask the question: ‘What happens if we carry on pumping all these fossil fuels and CO2 into the atmosphere?’ The information has come back and there is a real problem here . . . the longer you leave it the more expensive it will be to fix and the more damaging it will be.”

He is concerned about a delay in research in the coming years. Nasa has been leading the analysis of climate change data. “If Trump pushes back and reduces spend and our rate of understanding is slowed by his lack of investment, maybe China and places like that will take it up because they’re very serious about it now. But the thing is, how far in four years can you set that back?”

Cox identifies as a humanist rather than an atheist. He would appear to find a consolation in science that others find in religion. He is “comfortable and delighted with not knowing. That’s part of the foundation of education – the idea that the unknown is something to be excited about and not to be feared. Again, that’s probably something you have to learn or at least be encouraged to think about. Not knowing is an opportunity for a scientist.”

One of the questions he grapples with in his shows is the big one: what are we to make of our position in the universe. “The current best estimate for the number of galaxies in the observable universe is two trillion – and we have very good evidence that the universe is bigger than that, we just can’t see it. So obviously we’re physically insignificant.”

Cox often talks in unimaginable numbers but is swift to provide some reassurance. “But at the same time, if you had to guess you would probably say that life is common in the universe but intelligent life, civilisations, might be rare. And the evidence for that statement is we haven’t see any, number one, but secondly it took four billion years to go from the origin of life on earth to a civilisation. That’s about a third of the age of the universe.

“That might imply that it’s extremely difficult to go from simple life to complex life and then to intelligence and to civilisations, which might mean that we’re very rare. So in that case there’s a sort of spiritual element, I suppose, [in] what an incredibly valuable place this might be.

Cox’s delight in these ideas of the Earth’s preciousness is what makes his programmes so captivating, leading David Attenborough to say “If I had a torch I would hand it to Brian Cox”.

For Cox, the combined understanding of cosmology, astronomy and biology lead him to the view that “there’s meaning on Earth because it means something to us – a very simple point but it’s often missed. People talk about searching for meaning; they tend to mean God or something. I don’t. I think meaning can be temporary and local and it is here. Why does it have to be eternal? In that sense, if that’s true, then what a responsibility we have to ourselves, not to anybody else, but to ourselves.”

Cox believes we already know how to interpret these incompatible ideas of physical insignificance and value within the context of our own minds. “If everything is happening in an infinite number of worlds in an eternal universe, then obviously there’s no such thing as global meaning in that case. The fact that our lives are finite and small doesn’t make them less valuable; the opposite actually. And this is the philosophical question, or the one that artists and novelists answer, but science provides you with the framework.”

And so, back to the bigger picture. I ask him about Stephen Hawking’s recent statement that humanity only has a thousand years left on Earth. Cox believes it all hinges on “our ability to take global decisions”. Civilisations “get to the point where they can destroy themselves, they will get to the point where they can change the climate by industrialisation – and that requires your civilisation to be global in decision making. In 2016, we’ve gone backwards.”