Rapids review: An artful antidote to the resurgence of HIV

The HIV infection rate in Ireland is twice the European average, thanks to shame and silence 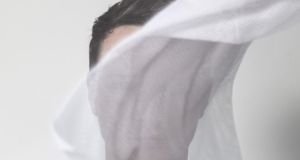 Talking Shop Ensemble and Shaun Dunne have collaborated on Rapids

Rapids are natural phenomena, explains the disarming writer and performer Shaun Dunne: a sudden change in circumstance that lead an ordinary flow into an inexorable surge.

The introduction to his arresting new show with Talking Shop Ensemble seems casual but measured. As he counts out the beats of sudden change – “One. Two. Three.” – television screens behind him flash white. That snap of corresponding media will become a motif in this sophisticated and bracing piece on living with HIV in Ireland. It begins with the idea of disclosure – making the private public – a theme that subtly informs its style of documentary theatre. Slipping between ritual, lecture and performance, it stealthily reveals more and more along the way.

HIV has had an accelerated biography, from a misunderstood virus, to a media scare-story, social stigma and under-reported source of tragedy, and more recently to a manageable condition. The more startling feature in Rapids, against a staggeringly high new rate of infection in Ireland (twice the European average), is how ignorance or ambivalence has allowed the virus to spread again.

“Oprah f**king Winfrey,” marvels a 25-year-old who has contracted the virus, mentioning his only previous contact for the issue. Through interviews with a range of people affected, from young men to migrant women and recovering addicts, Dunne’s material is shared with performers Charleigh Bailey and Lisa Walsh, through patterns of lulling repetition, ritualistic action and, at one point, audience response, as though in a deconsecrated mass.

Those chimes of congregation, familiar from TheatreClub’s I’m Not Here (which shared dramaturg Gary Keegan), don’t seem accidental. “There is a community,” says Robbie, a young man who counsels people isolated, or distraught by the diagnosis. “But it’s not a community that always looks at each other.” Another contributing voice puts the matter starkly: “I won’t be coming to your show, but that’s just the nature of the shame.”

Rapids builds a skilful, shocking picture of how such shame persists in isolation, how stigmas are maintained by silence and how invisibility perpetuates the problem. But its most ennobling achievement is to show what can be communicated in artful ways, whether it’s the sudden relief of mutual recognition between two guarded women, the absorbingly muted style of Walsh and Bailey, or the lightly appropriated metaphor of Buffy the Vampire Slayer’s “chosen one”, to bring the worry of disclosure into affecting new terms.

HIV infection, thankfully, can be largely prevented and effectively treated. But for an oblivious culture, a work as involving and compassionate as Rapids could the beginning of an antidote.