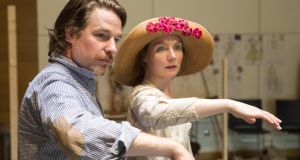 Director Ethan McSweeny and Aislín McGuckin in rehearsals for A Month in the Country at the Gate Theatre. Photograph: Pat Redmond

Not long after Brian Friel had completed his second adaptation of the work of Ivan Turgenev, in 1999, adding to his growing store of translations, he pondered his attraction to 19th-century Russia. After Ballybeg, it had come to resemble the playwright’s spiritual home.

“Maybe because the characters in the plays behave as if their old certainties were as sustaining as ever – even though they know in their hearts that their society is in meltdown and the future has neither a welcome nor even an accommodation for them. Maybe a bit like people of my own generation in Ireland today,” he wrote. “Or maybe I find those Russians sympathetic because they have no expectations whatever from love but still invest everything in it. Or maybe they attract me because they seem to expect that their problems will disappear if they talk about them – endlessly.”

The director Ethan McSweeny reaches for the quote, extracted from Richard Pine’s essay Friel’s Irish Russia, as though it holds the solution to a problem. “That’s what A Month in the Country is about,” says McSweeny, an enthusiastic and considered speaker, while ignoring his salad. (Preparing for a run-through that day of his new production at the Gate Theatre – his third in two years – his appetite had abandoned him.) “I do tend to see plays as problem sets,” he says. “My job is to go in and figure them out.”

McSweeny, an American in his early 40s, has pursued such an eclectic career as a director that he himself is hard to figure out. “I’m sort of delighted that you couldn’t find any rhyme or reason to my career,” he says, laughing. He was born in Washington DC, but grew up as a third-generation Irish-American among the city’s political classes, where he discovered his own Russian affinities via a curious route. His parents worked in “politics, diplomacy and business”, as he puts it (which is the simple version).

“One of my father’s specialities was in negotiating for the release of dissidents from the Soviet Union,” says McSweeny.

In his youth, McSweeny made a reverse journey, as one of the first Americans to attend a young pioneer camp in the Soviet Union. He had been enthusiastic about theatre in high school, but decided to put it behind him when he went to Columbia University and pursued Russian studies in New York.

He was on a clear trajectory towards a career in either diplomacy or journalism. Then something went wrong.

“I failed Russian,” he says sheepishly. “Spectacularly. I failed it because I was doing a play.”

At the time, in the early 1990s, Columbia was just initiating new curriculums in the arts. “In the hubris of youth”, McSweeny and some fellow students criticised the direction the theatre curriculum was taking. Calling his bluff, perhaps, and certainly in need of their first theatre students, the school not only invited McSweeny to declare himself a candidate for the degree but also to help them create the programme. McSweeny, strong in practice rather than theory, alive to other arts disciplines and fairly agnostic towards acting, “basically ended up creating a directing major without realising it”.

Creating his own path seems characteristic of the man. “I don’t tend to do well with well-trod systems,” he agrees. As a young director he was offered the opportunity to direct a new version of Aeschylus’s The Persians, which he turned down twice, believing that Greek plays were too often staid and underexplored. He eventually relented and it went on to become his signature piece. “As I tried to conquer what I didn’t like about it, I created a production that turned out to be pretty good,” he says.

“I believe that’s crucial for a director,” he says. “It makes it hard as a professional, though, because you’d have a more recognisable brand if you specialised.”

When Michael Colgan called him early in 2013 to direct A Streetcar Named Desire with Lia Williams, everything clicked into place. “There was something about Streetcar that found me at the right moment and out of the blue,” he says. “Coming here to do it, working in an environment with which I wasn’t familiar, kind of completed me as a director.”

McSweeny resisted Tennessee Williams’s “operatic dimensions”, focusing instead on psychological performances and a keen sense of claustrophobia, informed as much by the venue as the play. “With that project, I felt that my talent had kind of matured,” he says. “I was comfortable with who I was as a director.”

The production was nominated for six Irish Times Irish Theatre Awards and won three, including best director for McSweeny. He returned to the Gate last year with Wilde’s An Ideal Husband and will direct Friel’s adaptation of Turgenev’s novel Fathers and Sons next year.

It seems to illustrate the creative potential of being unsettled, something he says is a mixed blessing. (He spends, on average, 50 days a year at his home in New York.) “[American choreographer] Martha Graham said, ‘Movement never lies’,” he says. “My body keeps choosing places and not to settle.”

He is seeking to change that, but for the moment it’s a useful condition for a director, meaning McSweeny can always be an outside eye.

“I’m always very aware of being a guest here,” he says. “Part of the joy of being an itinerant director is learning different ways to do the same thing. Sometimes I can leverage the fact that I’m not from here to be the brash American and say the thing that no one else wants to say.”

Friel’s Irish Russia is an accommodating home for the frequent flyer, where dry wit and emotional cross currents make all love “a catastrophe”, to quote one character. “It fits very nicely within Irish rhythms,” McSweeny says of Friel’s vigorous transposition. “And yet some of the thoughts are so Russian: the cliche of revelling in extreme emotion, a kind of extravagance of despair. I think that’s equally present in Ireland, only it’s kept quiet. It comes out in eddies.

“Love may be a catastrophe, but you can’t live without it. It’s a force of great anarchy and it can wound, but it keeps you coming back because it can also enrich.”

That, for a change, sounds like a much more traditional route through theatre.

A couple of years ago, Ethan McSweeny met Tony La Russa, a name unlikely to mean much to aficionados of Irish theatre or classical Russian drama. But for fans of baseball, La Russa is a living legend and one of the most successful American team managers in the sport’s history.

At first it didn’t seem like the two men would have much in common, but they fell into a discussion on management strategy and soon became friends. “We discovered in conversation that we were really doing the same job,” McSweeny told me last year.

“My job is to get everyone to function at a peak of creativity, and work together. There’s a real analogy with coaching. It’s really interesting what Tony would do with a team of athletes and what a director would do with a team of actors. You’re getting them to perform over and over again. You plan, plan, plan and respond inspirationally in the moment. The management of these thoroughbred talents and getting them game-ready is another big part of it. As a director or a coach, you’re on the team but not on the field.”

McSweeny doesn’t strain the comparison, but he refers naturally and frequently to theatre as a team sport. “I’m inclined to believe that the actor is a great athlete, but an emotional athlete, in a way. I have such respect for their bravery.”

As neither Turgenev nor Friel was ever known to say: let’s knock it out of the park.