A Midsummer Night’s Dream: ‘Shakespeare may have been on magic mushrooms’

The Abbey goes Pan Pan for a subversive, tender and innovative production of Shakespeare’s warped comedy, which has been relocated to a nursing home 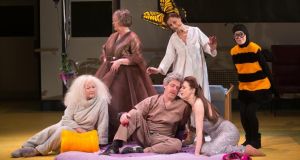 The Most Lamentable Comedy and Most Cruel Death of Pyramus and Thisbe was in full swing on a recent evening in the Abbey Theatre rehearsal room. It was, as you might have expected, well-intended, earnest, tailored for an intended audience, poorly reviewed and utterly hopeless.

To signify the moon lighting the way for the tragic lovers, Des Cave held aloft a battery-powered round lamp. To represent a terrifying lion that would not terrify anyone unduly, John Olohan wore a helmet with a piebald mane of paintbrushes. The star, Andrew Bennett, who had managed only moments earlier to extract his head from an ass, was committed, impassioned and reliably awful. Asked to skip their epilogue, they danced instead. Terribly.

It was all pretty hilarious.

“Welcome to the madhouse,” director Gavin Quinn greeted, with customary wryness, when the run-through of A Midsummer Night’s Dream had ended. That was one way of putting it.

Quinn has actually positioned his staging of Shakespeare’s wicked comedy of desire, deception and delusion in what has been variously described as “a nursing home”, “a retirement home” and “an old folk’s home”. Whatever words Quinn and a sample of his ensemble use to discuss the production – elder, older, senior – the concept is fantastically fresh.

It’s an idea worthy of Quinn’s outfit, Pan Pan, the leading contemporary theatre company in Ireland. Pan Pan’s radical interpretations of Shakespeare, Beckett and other classics, together with bracing original works, have brought the company far around the world.

For Quinn’s debut at the Abbey, he has recruited his Pan Pan artistic co-director, Aedín Cosgrove, as set and lighting designer; his regular Pan Pan collaborator Jimmy Eadie for sound; previous Pan Pan contributor Bruno Schwengl for costumes; and frequent Pan Pan performers Andrew Bennett, Gina Moxley, Dan Reardon and Áine Ní Mhuirí among a cast of predominantly older actors. If this isn’t a Pan Pan production, in what way is it different?

“Well it’s an Abbey production,” says Quinn. “I’ve been talking to Fiach [MacConghail, the Abbey director] for about 10 years about doing a show in the Abbey. Finally, we hit on this idea of doing A Midsummer Night’s Dream. It’s a play that I’ve always wanted to direct, and I had an idea for it. So it’s very much me coming to the Abbey as a freelance director.

“I wouldn’t say it’s a Pan Pan show because, for me, it’s an adventure. Basically, it’s a walk in the dark to see how this will work. Obviously there are different expectations, and the sheer fact that you’re making a show that is going to run for six weeks is a very different prospect. But, yeah, it’s an Abbey show with people who have worked with Pan Pan.”

This is no small point. To work with Pan Pan is to use a contemporary style of performance, where actors don characters lightly (if at all), improvise and devise regularly, and acknowledge the audience. To work with the Abbey, even in its more adventurous productions, is usually to honour the fourth wall, say the lines like you mean them, and try not bump into the furniture. For a cast that includes longtime professional actors, four of whom were in the Abbey’s 1979 production of Midsummer, an Abbey show with Pan Pan regulars might be a difficult thing to get your head around.

“It’s very liberating, because Gavin gives you room to do whatever you want,” says Stella McCusker, who plays the forest fairy Peaseblossom. “Personally, at my age, to be in a show like this, I find it absolutely wonderful.”

Faithful to the text

John Kavanagh worked with Quinn before, for the audio recording of Pan Pan’s fantastic production of Beckett’s radio play All That Fall, and he tends to stress textual purity. “The play still shines through,” he says. “We’re serving the author first and foremost, although it’s set in an old folk’s home. They go back into their youth and reveries when the ‘love juice’ is applied. The fact that it’s spoken by older people seems to enhance the language somehow.”

It can also lead an interview in surprising directions. “The play itself is a dream,” says Kavanagh, “but it may have been commissioned for someone’s wedding. The content of it is like an encapsulation of life, married life, what the future holds, even regret, regression of thought, and also hopes and expectation, desire . . . ” His eyebrows raise. “Sex.”

“Put more sex into it, I say,” interjects McCusker. “Bring it on.”

I suggest that Shakespeare knew what he was doing when he coined the term “love juice”.

“He may have been on magic mushrooms,” offers Kavanagh. “It’s not unlike Lucy in the Sky with Diamonds, the Beatles song.”

So then, what psychotropic drugs have gone into the making of the Abbey’s A Midsummer Night’s Dream?

“Oh, we’re not telling you,” says McCusker. “You might pinch it.”

The great man’s comedies often contain some of his most terrifying ideas, such as Jaques’s “All the world’s a stage” speech from As You Like It, which resolves in a chilling description of decline into “second childishness and mere oblivion, Sans teeth, sans eyes, sans taste, sans everything”.

Similarly, A Midsummer Night’s Dream can resemble a psychological horror story. People are conned and gulled, seduced or abused, held prisoner by the frightening, fickle power of desire. It’s a romantic comedy in much the same way that Stanley Kubrick’s The Shining is a romantic comedy.

Beyond the nursing home

Quinn doesn’t want to get snagged on his nursing-home concept.

“Sometimes conceits and concepts can drag you under,” he says. “For me, the idea was that it would start off in some sort of retirement home, old folk’s home, institution, then grow from there into a self-made fantasy.

“It’s already an incredibly contemporary, modern and visionary play. You have to take care of it and show its original and experimental nature. And at the same time, breathe something new into it.”

It’s a superb point about Shakespeare’s meta-theatrical tricks and double layers. Or, as Quinn puts it, “It’s a bonkers play already”. Like the courtiers who watch the Rude Mechanicals performing their hapless play, Midsummer audiences do something similar to Shakespeare’s enchanted characters: we share in a delusion, we stop distinguishing between reality and fantasy. Why, it’s almost like being in love.

It takes an archly aware and subversive mind to find parallels in dementia and medicated reverie: in this show, when the intoxicating, vision-inducing love juice arrives, it is administered by intravenous drip.

It’s not entirely surprising to hear that Quinn and Cosgrove worked together as art therapists in a psychiatric nursing home 20 years ago. If anything, those shivers of reality may make the comedy sharper. It is not a genre in which Quinn has boundless experience.

“I feel I’m the king of comedy,” he deadpans. “If this was Las Vegas, they’d be throwing down money.”

He turns serious just as quickly. “We’ve all worked out while working on the show that it is a comedy. Sometimes you have to take care of that concept as well as all the darker themes, because Shakespeare is a dramatic poet. Lots of things flood in the door.”

The visit to rehearsals proves this in abundance. “Every day it’s exciting and interesting,” says McCusker. “He lets us try different things. We can be wrong and we don’t feel awful about being wrong.”

“Having worked with Pan Pan before, this is a very different process and a different project,” says Moxley. “I feel as new as anyone else.”

The cast dynamic, they admit, is unusual. “Think of 18 people with all those anecdotes,” says Moxley.

“You get completely different conversations,” adds McCusker. “About memories, pensions and taxes.”

A contemporary style of performance is something they have been learning together, says Moxley. “There isn’t the same reverence for the audience, or that fear of blocking someone or turning your back,” she says.

“And people doing different things at the same time,” says McCusker, as though this is a breakthrough.

“And you’re not messing someone else up,” Moxley assures her.

I just have two more questions. Is this production true love?

Has its course run smooth?

They answer immediately and in unison.

There’s a first time for everything.