Welcome to Edinburgh: double rent, an inflatable cow and the hard sell

We in Foil, Arms & Hog are in our sixth Fringe and it’s getting easier. Never mind that our apartment has buttered bread stuck to a wall 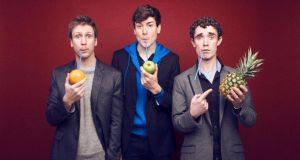 Welcome to the world of double rent and half standards. Having spent six hours asleep on the tables of an O’Brien’s sandwich bar in the company of the more-than-patient staff, we arrive at our Edinburgh “accommodation”.

Fringe apartments are obscenely overpriced and frequently in poor condition. This is a new low. Upon entering the apartment, we are greeted by a pile of mattresses, a broken table and enough traffic cones to make a drunken student salivate. The kitchen has a slice of buttered bread pressed up against the wall, the surfaces are covered in a shimmering honey glaze and the shower looks like a crime scene.

The letting agency finally gives it a good clean, but only after we send them 70 photos with captions such as “Dirt”, “More dirt”, and “Installation sandwich art”. It is then a case of bags down, quick nap and off to work.

The Fringe Festival’s heartbeat is the Royal Mile. It is packed with tourists, actors in various states of undress and street performers whose spectacular shows here are some of the best in the business.

This is where performers of all arts come to sell their shows in a masterclass of face-to-face marketing. There are large pillars all the way down the street where you can put up posters for your show, free of charge.

This is, however, an exercise more fruitless than a strawberry Yazoo. While putting up your poster, there is always someone waiting behind, ready to put their poster over yours. And someone behind them, and so on, a queue that extends all the way back to the printing shop.

Flyering is still the most time- and cost-effective way to sell tickets at the Fringe. You have roughly two seconds to pitch your show to would-be punters who have started their walk at the bottom of the Mile with smiles and hopes, but end by seeking asylum from the carnage of roaring musicals, Gregorian chant, flyer paper cuts and zealous seagulls.

You might laugh, but one of these winged dogs once plucked a full ham and Emmental cheese roll from my hand. The goal: to get people to look at the flyer, read it, and then hope they don’t chuck it too quickly. As the Dublin comic Trevor Browne once quipped: “I flyered the bin today. Just thought I’d cut out the middle man.”

The average audience at a Fringe show is two. As in, two people. Imagine being five years old and having to sing a song for your granny. Now imagine doing that for an hour, for a whole month, as an adult.

A friend of mine once had an audience of four, which – following a lights-down, lights-up scene change – reduced to none. Another needed a minimum of two for his show to work, but only got one. Realising the show couldn’t go ahead, the lone audience member suggested they just go for a pint.

Our ticket sales this year have been good, largely due to the fact that we are doing our sixth consecutive festival and have brought some people with us along the way.

There are two Fringe festivals; the free Fringe and the paid Fringe. The free Fringe doesn’t charge room rental to performers or ticketed entry to punters. People get a free show and are asked to contribute whatever they wish to the bucket at the exit. It’s great for performers, as they avoid the extortionate rates of the paid Fringe and all but guarantees audiences every night.

The downsides are that some venues are a lot less suitable than others, and often people who haven’t paid in to a show don’t feel obliged to pay attention, as they haven’t invested monetarily.

Still, if you’re doing the paid Fringe but are having to give away 20 complimentary tickets a night to get any audience in, it really throws a spotlight on your decision not to do a free show.

The paid Fringe’s chief venues – the “big four” – are Underbelly, Pleasance, Gilded Balloon and Assembly. Competition is massive and Underbelly has erected a giant inflatable upside-down cow, which, in conjunction with construction work nearby, has all but obscured its rivals, who I’m told are “nae bloody happy”.

A lot has been written about extortionate room rentals and how the paid Fringe is eroding the spirit of the festival, but if people have to pay to see you, they demand a certain level of quality, which forces you to work harder and get better.

We have had good shows so far, with very little stress. Our gigs here are getting easier, as most of the audience have seen us before, know what to expect from us and don’t need to be warmed up as much. Having an extremely talented director, Ronan Phelan, has helped to tighten up the material, meaning on a quieter night midweek the show will still flow nicely.

One night one of our idols, Rowan Atkinson, comes in, and kindly takes the time afterwards to thank us. Best Fringe yet.

Foil, Arms & Hog are playing the Edinburgh Fringe Festival until August 24, at 10pm at the Underbelly on Cowgate, edfringe.com. You can also see them live at the Dublin Fringe Festival in September, fringefest.com