10 things we learned from this year’s Edinburgh extravaganza

As always, the shows being staged encompass the weird, the wonderful and the wacky 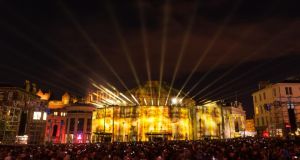 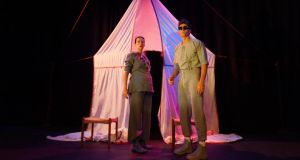 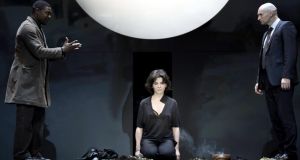 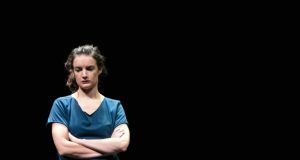 Aoife Duffin in the dramatisation of Eimear McBride’s ‘A Girl is a Half-formed Thing’, adapted for the stage by Annie Ryan

1. Edinburgh is not actually a matter of life and death

If you read any given festival report (“Edinburgh Fringe 2015: 10 top tips for survival” or “Surviving 24 hours at the Edinburgh Festival”) or reach for Mark Fisher’s handy advice manual The Edinburgh Fringe Survival Guide or merely wander through the scrum of performers pushing flyers on the Royal Mile, you will conclude that the Scottish capital in August is determined to kill you.

It isn’t. For all the tough talk – or maybe because of the efficacy of the survival guides – the death toll rarely spikes. Edinburgh is a pleasant and promising place, and festivals are supposed to be fun. At worst, you’ll sprain an ankle power-striding up the Mound and lose an hour of your life to a morass of daddy issues masquerading as a drama. But you’ll live.

For these three weeks, the population of the city quadruples, becoming a sea of artists, audiences and promoters all hoping to find each other. In such density, that isn’t easy. To borrow a line from Irish comic and festival veteran Abie Philbin Bowman: “Going to Edinburgh to get noticed as a comedian is like going to war to get noticed as a serial killer.”

3 Okay, Edinburgh is actually a matter of life and death

At the Edinburgh International Festival, which opened Fergus Linehan’s first programme as artistic director over the weekend, the themes already seemed both teasingly and grimly entwined with mortality.

Donnacha Dennehy and Enda Walsh’s new opera The Last Hotel revolves around an Irishwoman’s decision to die, and she convenes with an English couple to assist her suicide in a faded two-star hotel.

Walsh’s libretto, melding everyday banalities with darker meditations, suggests lives that are already inanimate: coupons to use the internet, carvery lunches evoked in a cascade of roast turkey and jelly mould images, countless lives moving through a transient space.

Dennehy’s music, abrasive and whirling, sweeps up the protagonists in its own eerie death drive in scenes both gleeful and disturbing (under Walsh’s direction, often both at once).

Although it took its inspiration from a real-life story of assisted suicide, Landmark and Wide Open Opera’s production – due to arrive to the Dublin Theatre Festival in late September – took a more metaphysical view of life and death, wondering archly, how we tell the difference.

4 Some rituals will always persist

Meanwhile, in ancient Thebes, Antigone is still defiant about honouring death rites. In a production led by Juliet Binoche and directed by Dutch master Ivo Van Hove, the contemporary language of Anne Carson’s translation reverberates around a design heavy with monumental structures.

For all the star quality of its casting and a finely judged performance from Patrick O’Kane as the fatally proud Creon, it’s the more natural diffident delivery of Obi Abili’s messenger who brings the ancient world amusingly closer to our own, aware of both ancient conventions and the drive to make them fresh. Binoche fares less well, more archetype than flesh, while Carson stresses the play as a conflict between piety and authority, woman and man.

Van Hove’s production seems most invested in ritual itself, though, from honouring the dead to exploring the theatre. Some things never change.

5 Perhaps we really are ‘Better Together’

The run up to Scotland’s independence referendum last year may have been divisive, but it helped to shape the theatrical concerns of many festival productions in 2014. The EIF’s three James Plays, by Rhona Munro, were a lavish exploration of kingship and Scottish identity.

Over at the Traverse, the dependable centre for new writing and new work, new Scottish plays such as John McCann’s Spoiling satirically imagined a newly separated Scotland in a battle to assert itself. Now, having voted to remain part of the United Kingdom, any overt political response is harder to find. Is it coincidental, then, that this year a number of performances are exploring personal relationships and why people choose to stick together?

6 Edinburgh is always a tale of two cities

Theatre-maker and comedian Bryony Kimmings delivered the Fringe’s opening address this year, an encouraging addition to the festival’s diary that reminds people Edinburgh is more than just a market place. Her experience was essentially a tale of two cities: her first visit, with 2010’s provocative Sex Idiot, was a remarkable success, a surprise hit spectacularly reviewed and widely awarded.

“I remember that summer as bouquets from a fan, skipping from party to party, laughing hard, being out of our minds with excitement.” Her follow-up, the ill-conceived 7 Day Drunk, she remembers as “hangovers, leaky shoes . . . and the worst feeling of not understanding how to make art”.

7 Love is a many documented thing

Kimmings’s current show, which she is likely to remember in sunnier terms, is Fake It ‘Til You Make It at the Traverse, which may work as an alternative survival guide in the stakes of love, partnerships and metal health. Performed by Kimmings and her boyfriend Tim Grayburn, it takes as its subject her discovery of Grayburn’s history of depression and coaxes it and a love story, through disarming devices, out into the open.

Sonya Kelly’s How to Keep an Alien, also in the Traverse in Rough Magic’s winning production, takes a different route through autobiography and relationships, artfully tracing Kelly’s romance with Kate, an Australian stage manager in Ireland, whom she meets on the eve of her visa expiry. Their ensuing romance unfurls over a meticulous effort to document the relationship for the benefit of the immigration office. Love, in Kelly’s charming performance, is wittily and imaginatively worth the struggle.

Mental health, in all its struggles, is a recurring topic at this year’s festival. Some People Talk About Violence and Every Brilliant Thing at Summerhall (another quality-assured venue in this mercurial city) take different yet unflinching approaches to depression. Brigitte Aphrodite’s much heralded My Beautiful Black Dog even makes a musical about it. The days of stigma appear to be lifting: where once people were loath to speak of the troubles of their mind, here there is permission to talk and sing about it.

In the world’s largest arts market, every advantage helps. Now in its 10th year, the Culture Ireland showcase has enabled various productions to take place in Edinburgh, supporting eight productions and 15 writers this year. It also plays a role behind the scenes, facilitating meetings for artists and international producers, helping to build connections, careers and – potentially – tours and deals.

The investment is already paying off. The Last Hotel, Rough Magic’s Alien, Fishamble’s Underneath (bringing Pat Kinevane’s one-man show to Dance Base) and Corn Exchange’s A Girl is a Half-formed Thing have already garnered sterling reviews, with Aoife Duffin also winning the Stage Award for Acting Excellence in Annie Ryan’s adaptation of Eimear McBride’s harrowing novel.

Outside the rubric of Culture Ireland, Irish acts and artists are everywhere: Beth Cooke, for instance, gives a terrific performance in an intriguing (but undercooked) Chicken, at Paines Plough’s pop-up venue, Roundabout, based in Summerhall. Elsewhere Eva O’Connor revives her elegant monologue of grief and sexuality My Name is Saoirse and Katie O’Kelly performs her comic retail-themed solo performance Counter Culture.

What is the show of the festival? Nobody knows. With two weeks still to run, these are early days, and no single show ought to be considered the standout production among more than 3,000 contenders. You might check The List’s handy aggregator of all published reviews so far, which uses a mathematical and celestial algorithm (basically, it counts star-ratings) to compile a chartlist. At the time of writing, Simon McBurney’s The Encounter at EIF is number one, The Last Hotel is third and, at fourth place, are more than 30 different shows. This is not an exact science.

But that is what any experience of Edinburgh ought to be: a gamble. Here, strangers eagerly seek and exchange show tips at cafe tables, people hand out flyers to make a human connection, and the power of the print media makes a resilient comeback.

Now is a good time to take a risk on a show about parenthood and climate change, a musical about depression, something you wouldn’t see everyday. It won’t kill you.

Martin Scorsese: ‘Crime is glamorous at first if you’re young and stupid’
10