Rock, comedy and some fine food were cornerstones of the third annual event 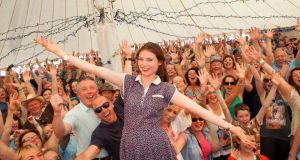 Pirate queen Grace O’Malley would “most certainly approve” of the shenanigans in the grounds of historic Westport House over the weekend.

That is according to Sheelyn Browne, her direct descendant, who surmised her 14th great-grandmother would have been happy to boogie to a line-up that included Sinead O’Connor, David Gray, 2Cellos, Bryan Adams and the Kilfenora Céilí­ Band. Add in comedy from David McSavage and a Seafood Symphony by local chef Frankie Mallon of An Port Mór, and it was no wonder Celtic god, Lugh, ensured weather conditions were perfect at the third annual Westport Festival of Music and Food.

Ms Browne runs Westport House and Pirate Adventure Park with her sister, Karen, while younger sister, Alannnah, operates Gracy’s cafe-bar in the grounds of the historic house. Its foundations were built on the site of one of Granuaile’s Clew Bay castles. Back in the 1990s their father, Jeremy Browne, the 11th Marquis of Sligo, put a Private Members Bill through the Oireachtas to change the terms of his trust, which stipulated one male heir, so as to allow his five daughters inherit the historic house.

“As far as Westport House is concerned we would love to see this annual event move forward. It is not only good for us but it is really spreading into the town with music on the streets and all the restaurants and hotels booked-out.”

“The line-up is stronger [this year] and it is starting to be recognised among the major summer festivals in Ireland, but it has to cover its costs in 2014, otherwise it makes it very difficult for returning in 2015.”

Festival-goer and local B&B owner Pat Aylward said: “This is a very positive development for Westport; it is like a mini-Electric Picnic but with accessibility to a town. It is so family-friendly and I met a lot of people who spent the day there with their children, headed home to put them to bed and then returned for the late gigs.”

It wasn’t only the revellers who were basking in the Mayo sunshine. David Gray cycled the Greenway before he wowed crowds on Saturday night, and when Chieftain Matt Molloy joined the Clew Bay Pipe Band there was a perfect sense of bringing it all back home.

The Westport festival was just one of a number of events over the weekend.

Fresh from the Pyramid Stage in Glastonbury, Arcade Fire dusted off the Macnas papier mache U2 heads at Marlay Park in Dublin last night.

“The ultimate passion and goal was to make the 30th year a sheer celebration of triathlon; spanning all abilities and crossing the generations,” explained Mark Kennedy of Limerick Triathlon Club.

“It is important to us that the race be attractive for all, suitably competitive for those wishing to have a crack at the National Championship but suitably relaxed enough.”

Speaking after the triathlon fellow organiser Ciara Murphy said: “Today we celebrated life, sport and our families. There is very little that can better that.”