Scooby-Doo is 50: Yes it really was all about drugs 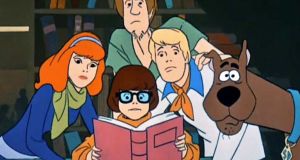 Daphne, Velma, Shaggy, Fred and Scooby in the original Scooby-Doo, Where Are You!, which premiered in 1969 and ran for three seasons. Photograph: Hanna-Barbera

Imagine an alternative universe in which children’s television of the early 1990s was taken up with references to ecstasy. The Adventures of Mandy and Molly ends with the heroes, bears in hooded tops, blowing whistles while dancing on a podium in rural Hertfordshire. If the shows got truly daring they could make reference to Scooby Snacks. That was, after all, an occasional nickname for MDMA.

Which brings us neatly to the 50th anniversary of Scooby-Doo, Where Are You! The Hanna-Barbera show was conceived to fill a gap after Action for Children’s Television (ACT), one of those endless busy-body organisations concerned with filth on telly, forced the cancellation on US TV of several cartoons deemed too violent. ACT had, in the era of the Altamont rock festival, no problem with a bunch of young weirdos travelling the country in a brightly coloured van.

Fred (cravat), Daphne (damsel in distress) and Velma (intellectual with Agnes Varda’s haircut) bounced off outer levels of the counterculture. But Shaggy and Scooby were something else. Voiced by popular DJ Casey Kasem, Shaggy spoke in, like, the unmistakable patois of the dope fiend, man, and moved with a lobotomised languor that suggested he should stay away from heavy machinery. Both he and Scooby, apparently a great Dane, were always hungry. It’s almost as if they were in the grip of something the uninformed ACT wouldn’t balk at hearing described as “the munchies”.

The American television of my childhood was permeated with now-bewildering allusions to the just-expired counterculture. It soaked up psychedelia as blotting paper soaked up LSD. Documentaries about the era describe how the rise of the hippie drove the firmest of wedges between generations. Novels such as Philip Roth’s American Pastoral wax movingly on that often painful divide. Yet the kids (and I do mean kids) were revelling in the reflected, smoky glow of Haight-Ashbury.

Just two months ago, streaming services welcomed The Banana Splits Movie to their menus. The enjoyable horror spoof revolves around a similarly titled show that, from 1968 to 1970, ranked up the chemical surrealism to dizzying levels. The eponymous Splits, a power-pop rock band, comprised four creatures of terrifying aspect – Fleegle, Bingo, Drooper, and Snorky – who, when not blasting out their theme tune, talked back to a sentient cuckoo clock or parried comments from a stuffed moose head.

Children’s entertainment had touched on surrealism before, but the crash zooms and swirling dissolves made it clear than we were in neighbouring territory to drug-culture movies such as Roger Corman’s The Trip. Everybody was involved in the same addled conversation.

The spookiest and trippiest series of that era was, however, the still ineffably strange HR Pufnstuf. I know middle-aged people who, to this day, shudder at the thought of the Krofft brothers’ series concerning a boy shipwrecked on island inhabited by talking trees, singing frogs and a talking flute. Of course, such things appear throughout fairy tales, but the tone of HR Pufnstuf rooted it firmly in the acid penumbra. The colours were exhausting. The camera angles were freaky. The puppets all seemed on the point of pharmaceutical breakdown. The show was actually called HR Pufnstuf, for Pete’s sake. Puf-n-stuf? Get it?

Inevitably the creators all expressed bewilderment about the subsequent associations drawn by stoned students. Then again, John Lennon always claimed that, rather than referencing LSD (perish the thought), Lucy in the Sky with Diamonds got its title from a drawing by the Beatle’s young son. Yeah, right. “We did not intentionally do anything related to drugs in the story,” Marty Krofft, co-creator of Pufnstuf, said years later. “They may have lent themselves to that culture at the time, but we didn’t ascribe that meaning to them.” The folk behind Scooby-Doo were similarly appalled at such accusations.

A bit of this made its way across the Atlantic. Dylan, the rabbit in the Anglo-French production The Magic Roundabout, was always suspiciously stoned of speech. Lord knows what was going on in Wanderly Wagon. But the more explicitly psychedelic stuff tended to be an American phenomenon. We must take the makers at face value when they say they weren’t trying to lure children towards hashish dens, but they cannot have been entirely unaware that they were drawing influences from a controversial, sometimes notorious counterculture.

What surprises now is that there was so little fuss from conservative curtain-twitchers. We are wrong to assume retrospective wisdom when re-evaluating popular entertainment – plenty of writers saw the problem with Friends 20 years ago – but the shifts in culture were, in the late 1960s, so jarring that it was hard for gate-keepers to maintain focus. Maybe the dog was just hungry. Maybe the Banana Splits were just everyday aliens. It hardly mattered. By the time of Watergate, the brief, weird riot was over. It was a trip while it lasted.