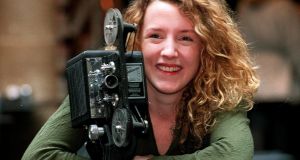 Writer-director Kirsten Sheridan is writing a biopic about the late singer Amy Winehouse.

Sheridan said she had completed a script about Winehouse, who died in July 2011 from alcohol poisoning at the age of 27. The script is for an American production company.

Sheridan, who has directed and written a number of films including In America, Disco Pigs and Dollhouse, said she was attracted to Winehouse’s strong will for better or worse.

“She makes a lot of mistakes, but they are her own mistakes,” she said.

Sheridan will chair a discussion tomorrow on the position of women in film and theatre at this weekend’s World Actors Forum in the Gate Theatre, the first of its kind.

As a writer herself she said there are too many passive female characters in films and she has internalised their passivity when writing herself.

“Women characters are not as complex as male characters. After you have seen that portrayed for years and years it gets into you. You don’t even realise it.

“The scary thing is that you are not even conscious about it. You have to remind yourself. Women only serve a purpose in the script rather than serve their own purpose.”

A new study published this week by the University of Southern California found the number of women in speaking roles in the top 100 Hollywood films dropped to just 28.4 per cent last year. Women made up just one in six of the directors, writers and producers of the same films.

While many Hollywood blockbusters are orientated towards teenage boys predominantly, she says the trend is more worrying that only one film in competition at Cannes this year was directed by a woman.

“You can’t ignore the statistics. They make for scary reading. Things have gotten worse in terms of roles for women,” Sheridan said.

The forum has been organised by Gate Theatre director Michael Colgan as part of Ireland’s EU presidency and has support from the Irish Film Board, the Arts Council and Fáilte Ireland.

“I have a feeling the time is right for actors to do something about their position in society,” Colgan said.

Among the well known names taking part include Jeremy Irons, Michael Gambon, Brendan Gleeson, Charles Dance and Penelope Wilton. The international dimension is covered by actors from Tunisia, Lebanon and the Palestinian territories.

Jeremy Irons will speak about actors being advocates for certain positions. He narrates and produces a documentary called Trashed about the mountains of rubbish accumulating around the world.

Colgan says it is a term of derision used to dismiss anybody associated with the acting profession and to get them to stick to the script.

“It is time to get rid of the thinking behind this business of luvvies. This is a slur in some ways about actors. I think actors are underpaid, their potential as commentators is underused.”

Charles Dance will participate in a discussion about actors being directors and producers.

“In certain sections of society, usually among the not particularly cultured areas of society, financiers, bankers and estate agents and I don’t mean to malign the whole bloody lot of them, we don’t seem to have very much in common,” he said.

“Their sole concern is making money. Because of what we do is of no interest to them, they won’t take us seriously because they don’t think what we do is serious. In a way, who couldn’t blame them for not taking us seriously? It is a ridiculous way to make a living, but it is a respectable, honourable profession.”

The forum will be open to the public and tickets are on sale now. Furthern information is available at www.worldactorsforum.com

One World: Together at Home – the Irishman who helped get Lady Gaga to say yes
5

Love Wedding Repeat: You should avoid this ‘Four Weddings’ rip-off
10