Real-life Derry Girls: ‘The nuns are gone but the pupils are the same’ 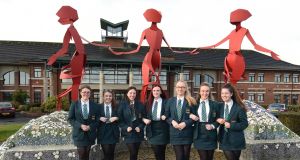 The convent school the Derry Girls attend is fictionalised, but everyone in the city knows it is based on Thornhill College on the Culmore Road, near the Border with Donegal.

Written by past pupil Lisa McGee, Channel 4’s hit comedy series follows the antics of four teenage friends – and a “wee English fella” – growing up and going to school in Derry in the 1990s.

These days Thornhill has no teaching nuns, and lessons take place in a new, modern building, but eagle-eyed watchers of Derry Girls have spotted that the crest on the green uniform blazer bears the grammar school’s motto: Adveniat regnum tuum [Thy kingdom come].

And while today’s students may not have soldiers boarding their school buses at British army checkpoints as McGee would have experienced, it seems some things have not changed.

“It’s so relatable,” says Ciara McCartney, who is studying A-level drama at Thornhill. “We don’t have nuns any more, but the students are still the same and have the same sense of humour.

“I love whenever you’re watching it and you see them having a conversation and you’re thinking, my mammy says that all the time.”

Referring to an early episode in which the teenage characters are unfazed when armed soldiers board and inspect their schoolbus, she says: “I loved the way that when the soldiers came on the bus it was just normal.

“When you’re speaking to your mammy and daddy and they say things like how they’d walk out the door and there’d be a soldier sitting there and they just had to get on with it, you can’t imagine it, but then you see it and it’s real.”

Her classmate Therese Conway agrees. “The Troubles is like the cameo on the show and it’s the personalities that are the stars,” she says.

Student Aoibhinn O’Doherty adds: “When you see the Troubles on television they’re all black and white, but then Derry Girls is all vibrant and colourful and shows it in a different light.”

In Derry, there is pride – and also some relief – that this is the version of the city which is not only being viewed but also embraced on British television.

“Whenever you hear there’s going to be a series set in the Troubles you think ‘oh no’, because some of them are really bad,” explains drama teacher Maeve Connolly.

“You think it’s going to be every cliché under the sun and I think everybody who watched it on the first night was hoping they weren’t going to cringe, but then Lisa McGee is from Derry, she’s a Derry girl, and it’s just so positive.”

If Derry Girls has rewritten the story of Derry to some extent, then it’s also turned some real-life Derry girls into ambassadors for the city.

“I took some students to a debate in Ballymena [Co Antrim] last week and some of the other schools had watched the show and it was great because you could see our girls fluffing up their feathers and saying, ‘yeah, that’s us’,” says Ms Connolly.

These days, Ms Connolly’s drama class even has its own “wee English fella”, much like the fish-out-of-water Derry Girls character James, cousin of one of the female protagonists, who is played by Dylan Llewellyn.

Ryan McGinn is one of several boys from St Columb’s College who study drama with the Thornhill girls as part of a shared learning programme.

“James felt like a very relatable character to me,” he laughs. “Coming to an all-girls school and being a boy is the best thing and the worst thing that could happen to you.

“You’re going to get some slagging, but it’s all in good faith, and you get the best of both worlds. There are a good few perks of coming to a girls school.”

His family moved to Derry a few years ago and he admits he has worked hard to acquire the accent, but says the series has been an eye-opener for his relatives back in England.

“At first they didn’t really understand it. My granny was saying we talked too fast, and we kept saying ‘wee’ all the time, and what does ‘wee’ mean?

“It was a bit of a learning curve for them over there but I think they’ve caught on now and it’s shown them we don’t live in the Troubles any more.

“It was so hard to explain to them what it was like in Derry, but now we have the show to explain for us.”

Meanwhile, Maria Laird, who plays the precocious first-year who refuses to budge when asked to give up the coveted back seat of the bus in the first episode, is still attending Thornhill.

“That happens on our bus every day, so I didn’t really have to act it out, it’s just what happens,” she says.“Nobody believes I’m 18. They’ll say to me, ‘How are you enjoying first year, love?’ and I’ll say, ‘That was six years ago!’”

So successful that a second series was commissioned after only one episode, the popularity of Derry Girls has sparked comparisons to that acme of Irish comedy success on a British channel, Father Ted.

Derry Girls concludes on Thursday at 9pm on Channel 4.