Letters from the American Civil War: I wish this cruel war was over

Ellen Alden’s discovery of her great-great grandfather’s letters inspired her to write a novel about his role in conflict that killed over 25,000 Irish 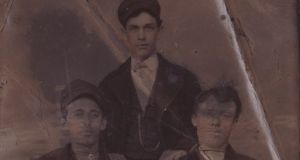 It is five years since Ellen Alden found a small mahogany box in the attic of her home in West Springfield, Massachusetts. The box contained 19 original letters written by her great-great-grandfather Florence Burke to his wife, who is also called Ellen. They bear extraordinary testimony to an Irish immigrant’s involvement in the American Civil War.

It has been the fate of Irish warriors for centuries to die in their multitudes in other nations’ quarrels. More Irish fought and died in the American Civil War than in any conflict aside from the first World War.

The civil war was bloody beyond the imaginings of any of its combatants. Damian Shiels, the foremost Irish historian of the war, estimates that between 25,000 and 35,000 Irishmen were killed in it.

They were part of the forgotten multitudes that left Ireland after the famine. Florence Burke was one of them. He was 19 when he left Ireland in 1848 from his home village of Ballinhassig, Co Cork. He was already married to Ellen Daly who had left Ireland six months before he did.

There are two photographs of Burke in Ellen Alden’s possession. One taken on arrival in America shows him with his brother John. They appear purposeful and optimistic. The second is taken when he was a Union soldier, looking haunted and considerably older than his 35 years.

In January 1864, during the penultimate year of the American Civil War, Burke enlisted as a soldier in the Union army. He did so despite being married with three young children.

He took the place of Samuel Day, the 19-year-old son of a wealthy local banker. The teenager had been conscripted, but, under the conscription law, a wealthy man could buy his way out of military service if he put up $300 or found a substitute draftee. Burke agreed to be a substitute in exchange for a parcel of land which made him a landowner.

He was given very little notice to report for duty, leaving his shocked wife to fend for herself in an isolated homestead with her children – the youngest a new-born baby Grace.

When war broke out, Burke was still operating as a tenant farmer with all the insecurities and diminished status that brought in 19th-century America. In becoming a landowner, he risked his life to get ahead and make a better life for himself and his family.

This is the premise of Ellen Alden’s debut novel Yours Faithfully, Florence Burke which might be best described as historical faction. The narrative of this intensely moving book is underpinned by the 19 letters which she found in the attic.

The letters are not political in nature. There is no mention of Ireland in them, nor little by way of musings on the rights and wrongs of slavery. Burke is preoccupied with the hardships of the life he has chosen and staying alive.

“In earnest I have commenced the life of a soldier…. After a horrid march of 35 miles, such a hated set of men were never seen before in the army of the Sixth Corps or any other corps of the Potomac. We bivouacked on a hill in an open lot, mid a slight snowstorm.”

The letters become darker in tone as Burke marches south towards the battlefields. “I awake and find myself on a pine stick like a chicken at roost and it makes me wish this cruel war was over.”

The letters are distinguished by their plaintive longing for home. Burke is tormented by guilt and homesickness.

He prays fervently for deliverance and to return safely to his family. There is a lyrical tenderness in his writings which belie his lack of a formal education.

He writes to his wife: “On my arrival to camp I found a letter and a likeness from you containing your well-known features and that of the children, and mingled tears of joy and sadness welled up in my tired and weary eyes.

“Joy at again seeing through the medium of a picture the features of those I hold so near and dear to my heart, but sadness to think they were not true nature itself, that they might speak to cheer my drooping spirits.”

He assures his wife that in doing his duty he will play his part in ending the war and adds “Ellen, my beautiful wife, please keep good courage. I will return to you. For you are the bravest, most clever woman I have ever met.”

His longing, though, turns to paranoia when news reaches him that his friend Daniel Sheehan has been seen around his home in West Springfield a lot since he went away. “I don’t believe it but I beg of you to write to me and tell me what it started from,” he asks his wife.

The letters reference several battles and even the Union commander Ulysses S Grant who came to inspect Burke’s regiment. It could have been a history book, but the author thought it deserved a different treatment.

“Initially I wanted to write a nonfiction book, straightforward retelling of the events of the Burke family with all 19 letters included,” Alden explained.

“I collected data and research, made a time line, created detailed chapters and listed historical events, people and places. But then I travelled to Ireland for a second time. At that point everything changed. The landscape, the people and atmosphere felt more real to me. I know many Americans say this when visiting Ireland but it was true for me.

“I suddenly felt a strong connection to my past. I could imagine my great, great grandparents here in Ireland and I knew I wanted to bring their story to life with rich detail and conversation.”

In one of his last letters, Burke appears to lament the choice he made, but concludes “it is too late for spilled milk …I feel and trust in God we shall live to see each other in good health.”

He never did get to see his wife and children again. On June 18th, 1864, Florence Burke was killed during the Battle of Petersburg. This awful battle presaged all the horrors of the first World War with its protracted trench warfare and useless, bloody charges against fixed machinegun positions. Burke died occupying a trench which his commanders assumed was empty. It was crawling with the enemy.

His baby daughter Grace sadly died when he was away at war. His sons Jerry and Michael were left fatherless.

And yet, by his becoming a landowner, they were entitled to a better education than they would have got otherwise.

Florence Burke is an Irish tragedy and yet a typical American immigrant story, where the first generation makes sacrifices so the next can get ahead – in Burke’s case the ultimate sacrifice.

Alden published the novel herself last year. On her visit to Ireland in September, she attended the famine exhibition in the St Stephen’s Green Centre curated by Gerard McCarthy, which featured her great-great grandfather. She also participated in Culture Night in Cork.

Yours Faithfully, Florence Burke has been used in private schools in the Massachusetts area to teach schoolchildren about the connection between Irish immigration and the American Civil War.

The letters recently came to the attention of Boston College, which offered to preserve them for posterity. On January 31st, Alden will hand over the letters to the college’s John J Burns library. It has been the repository of much material relating to Irish history.

“I will have a hard time parting with them, honestly,” Alden says. “I feel fortunate to have found the letters and I developed a real sense of who my ancestors were from reading their words and writing their story in the first person. So it will be hard to see them go, but I know it is the right decision.

“Education in America was a dream for the Burkes. I bet they would have never imagined their letters/history would end up being archived at Boston College, one of the best Irish-Catholic schools in the country.”
www.EllenAlden.com