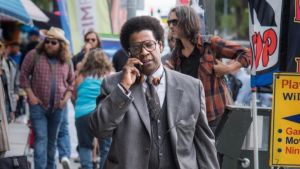 Every now and then you come across a high-end movie – nominated for Oscars, perhaps – that looks to have been shot from a crude first draft written with a broken biro. Roman J Israel, Esq is just such a film. There’s an interesting drama in there, but it has not been given time to fight its way out of the semi-digested mulch all around.

Making some effort to improve on Standard Asperger Acting 406, Denzel Washington plays the eponymous lawyer – formerly a civil rights activist – working in the back room of a mid-level LA firm. The film opens with his boss, the guy who does the court work, keeling over from a heart attack. Evil posh attorney Colin Farrell breezes in and closes down the firm. Roman first makes an effort to break out on his own, but he eventually accepts the inevitable and goes to work for Evil Farrell Enterprises.

Has he entered into a Faustian pact? It’s hard to say. We initially assume Colin is the devil because he wears a suit, drives a BMW and is impatient of Roman’s compulsive disorders. But later on he turns out to be rather nice.

Israel’s character is equally sketchily conceived. A mid-film plot swerve shows him behaving so wildly out of character that we might reasonably assume we’ve fallen asleep and woken up in a different Denzel film. Moreover, that implausible incident (enough to fuel a half-decent episode of The Good Wife) is dealt with so hurriedly that only the sharpest viewer will realise it’s accelerated us towards moral reckoning.

In other words, the thing is a total mess. Some good ideas remain. When Roman goes to address a contemporary civil rights meeting, he is made jarringly aware of how issues such as gender, under-explored in his radical youth, have now been pushed to the front of the conversation.

Oh well. Denzel still got his Oscar nomination. He’s the male Meryl. Try saying that after a few drinks.