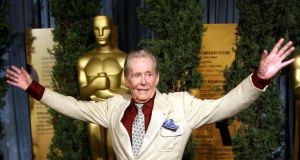 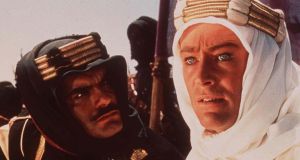 Peter O’Toole (right) as T.E. Lawrence, with co-star Omar Sharif, from the 1962 film Lawrence of Arabia 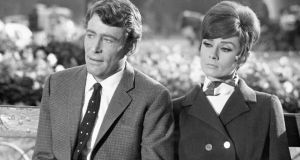 Audrey Hepburn and Peter O’Toole as a sad couple on a park bench during during location shooting in Paris for the film in new comedy ‘How to Steal a Million Dollars and Live Happily Ever After’. Photograph: PA Wire.

President Michael D Higgins has paid tribute to the late Peter O’Toole, describing him as a man of grace and genius, during a memorial event in London today.

O’Toole, who achieved stardom in the Oscar-winning classic Lawrence Of Arabia, died in December aged 81, and was renowned for wild living as well as his brilliance as a performer on stage and screen.

Speaking at the event at the Old Vic Theatre in London today, Mr Higgins said the O’Toole “that I knew and loved was a man of immense charm, grace, intelligence and eloquence who was assiduously professional about the vocation of acting.

“To be in his company or to share his friendship was not an experience in the raising of hell - as some tabloids would have it - rather it was about the witness of great talent, mischief, and genius too,” he said.

The eight-time Academy Award nominee - who never won Hollywood’s top acting honour - shot to stardom 50 years ago in the title role of Lawrence Of Arabia, which earned seven Oscars, including best picture and director for David Lean.

His performance as British adventurer TE Lawrence brought him his first best-actor nomination but set him on an unenviable path of Oscar futility. His eight losses without a win is a record among actors.

In the latter film, O’Toole played a dissolute actor preoccupied with drink and debauchery, seemingly a tailor-made role for a star known in his early years for epic carousing with such fellow party animals as Richard Burton, Richard Harris and Peter Finch.

He received an honorary Academy Award in 2003 for his lifetime’s work and retired from showbusiness in 2012.

No living person is sure whether his birthplace was Connemara, Dublin or Leeds.

Mr Higgins said he met O’Toole in 1969, introduced by a mutual friend, beginning a friendship lasting 44 years. He said O’Toole was destined to be a star.

The President said that when he was a boy he had written in his notebook: “I will not be a common man. I will stir the smooth sands of monotony.”

Mr Higgins said that from his breakthrough role in Lawrence of Arabia to the end of his life, “this early reference to sands was somewhat prophetic.”

Amid anecdotes about O’Toole’s love of rugby and cricket - and his battle to control a rabbit problem at his Clifden garden - Mr Higgins mused on his friend’s longevity.

“It was Peter’s great sense of hope, of belief in his craft, that kept him so productive during an acting career that spanned over five decades,” he said.

“It was that affirmative sense of hope and sophisticated sense of what was important in his craft that allowed him to embrace with enthusiasm each of his eight Oscar nominations for an acting role without harbouring any resentment a lesser mortal would have felt when the cruel serendipities of timing snatched from his grasp, what others might have considered, the ultimate prize.”

O’Toole went into acting after serving in the Royal Navy, studying at London’s Royal Academy of Dramatic Art.

His early stage successes included the lead in Hamlet and Shylock in The Merchant of Venice.

In 2003, aged 70, O’Toole received an honorary Oscar, often given as a consolation prize for acclaimed actors and filmmakers who never managed to win Hollywood’s top award.

Mr Higgins concluded: “We will not see his like again.”