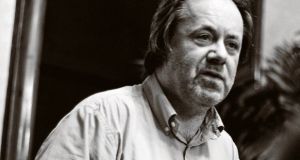 Poet Matthew Sweeney had a gift for friendship and a mischievous smile that led him to be much treasured by family, friends and peers, a ceremony in Co Cork celebrating his life has heard.

Poet Matthew Sweeney had a gift for friendship and a mischievous smile that led him to be much treasured by family, friends and peers, a ceremony in Co Cork celebrating his life has heard.

The late Aosdána member (65) was was described by his daughter Nico as a person with a “remarkable mind and buckets of imagination”. She told the gathering at the Triskel Arts Centre in Cork city that her father was a “true artist”.

Sweeney was diagnosed with motor neurone disease last year and continued writing up to three days before he died. A prolific writer, he published numerous collections of poetry, including Inquisition Lane (2015) and Horse Music (2013).

Nico said her childhood in London with Sweeney, her mother Rosemary and brother Malvin was “colourful, vibrant and exciting”. They shared their home with many interesting friends who admired her father’s gifts for entertaining and cooking, a skill for which she said he deserved a Michelin star.

“Our childhood was enriched with delicious meals and a delightful soundtrack,” Nico said. “Dad will continue communicating with us through his poems. There are no words to describe how immensely you will be missed.”

Nico’s daughter, Nell, read a poem written written for her by Sweeney after her birth. Another poem he wrote for his grandchild Jude was also read out.

In Hey Jude, Sweeney wrote that his grandchild should imagine him as a brown bear in an office seeking a way out. Jude was told not to worry as the bear had his own jar of honey and would be resplendent in blue sunglasses and a pork pie hat.

Malvin joked that a great joy was that when he was young, he and his father shared similar levels of maturity. He recalled getting into trouble for coming in to school as a teenager without shaving. His father was contacted and the school was told that if a beard was good enough for Jesus, it would work for Malvin too.

Mary Noonan, the late poet’s partner, said he was a man who lived “lightly over the earth”. He was like a “magnetic forcefield” who drew poets together and gave himself fully to his art.

“It is clear Matthew that your writing and your teaching had and will continue to have an impact on the life of poetry infusing it with provocative energy, disturbing playfulness and colour.”

Friends and fellow poets including Jo Shapcott, Thomas McCarthy, Gerry Murphy, Maurice Riordan and Padraig Rooney recited some of Sweeney’s poems during the ceremony, and light hearted tales were told of how editors could now “sleep easy in their beds” following his death as Sweeney was known for writing trenchant replies when his work was not deemed to the taste of certain individuals.

Sweeney’s burial will take place on Thursday at 2pm in Clonmany New Cemetery in his native Co Donegal.