Podcast: The secret lives of writers

Scribes of sport, arts and screen lift the lid on their professions 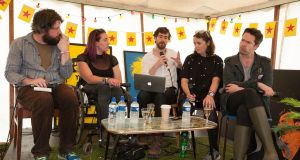 Last week Off Topic got out of the studio and went on the road to Electric Picnic.

The Irish Times tent in the Mindfield spoken word area played host to a series of talks on TV, film, sport and media. On this podcast we’ll be having a listen to some of the best bits.

First up, it’s the inner workings of a much-envied job: sports writing. Gavin Cummiskey and Malachy Clerkin of The Irish Times and Sinead O’Carroll, news editor of the journal.ie talk about reporting on Rio, the fallout from the scandal surrounding Pat Hickey and alleged ticket touting, doping in sport, and the art of conveying the experience of sports people in their crucial moment of victory.

Our next discussion focuses on writing for television and film, and features Sarah Francis, who was previously story editor for Fair City, and Louise Ní Fhiannachta, director of TG4’s ground-breaking drama Epic and the award-winning short film, Rúbaí.

They discuss just how much work goes into making a TV drama (the Fair City story room, for example, works 50 weeks a year, creating storylines for 200 episodes), what Netflix and Amazon mean for making TV and the format of TV shows and the role of show-runners here and abroad. They also discuss the national past time of slagging off RTÉ.

And finally on the show, Irish Times arts writers discuss the joys and the frustrations of writing about culture.

You’ll hear from Laurence Mackin, Una Mullally, Patrick Freyne, Peter Crawley and Louise Bruton. How do you review an album you’ve only heard once? How do you stay impartial in a country as small as Ireland? And what happens when you make a critical judgement and realise you’ve got it wrong?