Billy Wilder’s 1959 film is being reissued. But how did it attain untouchable status? 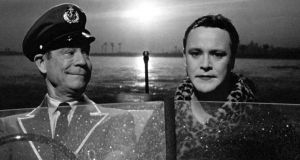 Joe E Brown and Jack Lemmon in ‘Some Like It Hot’. Photograph: Metro-Goldwyn-Mayer Studios Inc

Late last year, the BBC polled the world’s film critics to discover the “greatest comedy of all time”. The usual candidates showed up: Dr Strangelove (a great film, but is it that funny?), His Girl Friday (three hours of dialogue in 92 minutes), Airplane! (the jokes, the jokes!). But nobody was in much doubt as to what would take the top spot. Sure enough, Billy Wilder’s Some Like It Hot romped home. Had the bookies been taking bets you wouldn’t have got better than 1/5.

At some point in the past 30 years the supremacy of Some Like It Hot, which returns next week in a new print, became a critical semi-orthodoxy. In 2012, Sight and Sound’s decennial poll – the loftiest-browed of such children’s games – placed it behind Buster Keaton’s The General, but no other sound comedy came close. It’s the law. Some Like It Hot is the funniest film with actual talking in it. And the law’s the law.

It implies no attack on the film’s reputation to wonder how this came to be. This writer listed Wilder’s The Apartment – a more sombre comedy – ahead of Some Like It Hot in both polls, but I was still happy to see the cross-dressing romp score so highly. Not everybody regards Some Like It Hot as their favourite comedy. But nobody hates it.

The personnel make their own case. Renowned for wrapping subversive cynicism around the most perfectly calibrated jokes, Wilder remains a holy figure in American cinema. Like John Ford or Howard Hawks, he is as popular with critics as he is with the general public (or that part of the public that still watches films made before 1990). Marilyn Monroe’s complex, troubled energy is undimmed by the passing of the years. Jack Lemmon and Tony Curtis, perky actors at home with Wilder’s misanthropy, throw themselves heartily at unusually demanding roles. Joe and Jerry are funny. Josephine and Daphne are funnier still.

One should never underestimate the amusement to be derived from men dressing up as women. We are now more sensitive about the interference patterns that waver between genders, but this durable comic staple is going nowhere. You get a bit of it in Shakespeare. Bugs Bunny was rarely funnier than when he was pretending to be a Brooklyn broad. Tootsie is as hilarious as any American picture of the 1980s.

Nobody will need to be told that Some Like It Hot follows two musicians, compromised after witnessing the St Valentine’s Day Massacre, as they pull on female disguises and join an all-female dance band. Derived from a French film called Fanfare of Love (remind anyone whinging about remakes that the term also covers the most famous versions of The Wizard of Oz and The Maltese Falcon), the picture exploits every opportunity to highlight the surface differences between men and women. Josephine (Curtis) and Daphne (Lemmon) are scarcely convincing as everyday females, but they’re persuasive enough to root the film in plausible uncertainty. You know? Like in Mrs Doubtfire. That’s always a hoot.

But the untouchable status of Some Like It Hot surely results from something broader and more profound. Like a lot of works that figure in “greatest ever” lists, Wilder’s film sits on the cusp between approaches; it straddles the fence between ideas; it incorporates apparently complementary tones. The viewer can approach from a number of angles.

The timing of the film is significant. Some Like It Hot arrived at the end of a decade that – not entirely accurately – is associated with the consolidation of the suburban American dream. The Catholic League of Decency, on the film’s release in 1959, condemned the content as “morally objectionable”. Its subsequent success went some way towards finally killing off the Hays Code that had constrained depictions of sexuality since the 1930s. In that sense, Some Like It Hot offers a bridge between American culture of the 1950s and 1960s. Shot in monochrome after makeup tests revealed a “ghoulish” Josephine and Daphne in colour cameras, the picture doesn’t exactly declare a New Frontier, but that famous last line – “Nobody’s perfect,” Joe E Brown’s playboy quips after learning that Daphne is less female than suspected – suggests an accommodation with same-sex relationships that would have been harder to sell at the start of the decade.

The film is pitched between light and dark. Few comedies begin with an actual massacre and George Raft, a man with a tough past, makes no concessions to levity in his portrayal of hoodlum “Spats” Colombo. There’s a real threat there.

The story around Some Like It Hot layers the picture with further uncertainties. Monroe, who was to die three years later, was famously hard to work with and required dozens of takes to complete even the simplest scene. None of her later films are free from those whispers of impending doom.

Yet Some Like It Hot is still uproariously funny. The Apartment, shot the following year, is so gloomy – it features a suicide attempt at Christmas, after all – that it barely counts as a comedy. Minor chords underscore every laugh. The earlier film is never so weighed down. It skips across puddles.

There’s more. Some Like It Hot’s position on those charts confirms its status as a work that belongs to the high arts and to popular culture. One is never in any doubt that one is watching the most gifted American film professionals at the top of their game. It’s a tribute to a glorious machine – the Hollywood studio system – as that machine was spluttering into redundancy.

Some Like It Hot is reissued on November 2nd

Jodi Picoult: ‘Abortion will become a privilege, not a right’
9

A lock of hair
Real news has value SUBSCRIBE