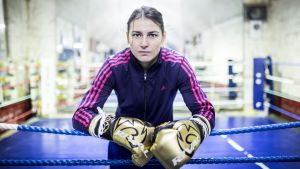 Ross Whitaker and his team will have been biting their nails last weekend when Katie Taylor stepped into the ring with Cindy Serrano. No worries. The Bray boxer triumphed and allowed Ross’s engrossing, disciplined documentary to surf a continuing wave of professional triumph.

Taylor’s ascent has not been uninterrupted. The film takes us through her beginnings as an absurdly determined kid who – sometimes forced to pose as a boy – developed the loftiest ambitions before women’s boxing was recognised as a sport. It follows her rigorous regime as she moves into the more aggressive, hype-oriented professional realm. But the film’s fulcrum is that tricky era when, a tad rudderless after losing her father Peter as trainer, she lost at the 2016 Olympics and then shuffled away from the amateur sport.

Whitaker is forced to tread carefully here. The reasons behind the falling out between Peter and the family are still shrouded in gossipy murk. But we are left in no doubt that this was the point when it could have gone wrong. Her stirring resolve, her religious faith and the support of her family look to have got her through.

Whitaker has another challenge. Famously shy, notably embarrassed when talking about personal matters, Taylor is a walking, punching, dancing enigma. Awesome will works against emotional reticence. You feel she would face an army of thousands with more enthusiasm than the next press conference.

That is part of her appeal. Interviewed at length, reticent without being evasive, she leaves enough hidden to keep the Taylor enigma alive. Anyone hoping for revelations on her love life has come to the wrong film.

The storytelling around her is efficient, lucid and (ahem) punchy. Family and associates laud the boxer without ever becoming overly gushy. We get a taste of her attachment to Christianity. We get some sense of what drives her to greater heights. Buffed with stirring fight sequences, the picture stands as a polite argument for the greatness of a figure almost everyone already loves. But, unlike Notorious, the recent makeweight Conor McGregor doc, it never feels like a product of the fighter’s marketing machine.

Everyone will want to see what Katie did next.