The Hate U Give review: Home truths on the American condition 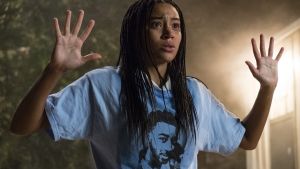 Film Title: The Hate U Give

When critics attack they too often focus on all the things a work has failed to cover. This film about the Black Death doesn’t mention the Mongol conquest of China. This book on Jim Morrison has little to say about his snakeskin pants. That sort of stuff.

George Tillman jnr’s largely excellent take on Angie Thomas's important young-adult novel certainly works its butt off to cover all bases. Dealing with the aftermath of a police shooting in the black community, the picture throbs with a hubbub of overlapping arguments. If one were being unkind one might argue that, in striving so hard for comprehensiveness, The Hate U Give ends up being a little schematic.

The protagonist’s white, middle-class boyfriend is largely well-meaning, but he doesn’t grasp the realities of racial tension. When he claims that he doesn’t see colour, she replies: “If you don’t see my blackness, you don’t see me.”

Another white friend, though initially supportive, eventually reveals a soft suburban racism that does as much to retard progress as does its more aggressive cousin. Her uncle, a cop, talks her through the pressures on his colleagues. And so on.

The more one ponders the film, however, the more impressive its rigorousness seems. Audrey Wells’s adaptation of Thomas’s novel may emit the odd clunk, but it will get across more home truths than a year’s worth of hysterical network news (a medium that gets its own skewering here).

A stunning performance by the unstoppable Amandla Stenberg alone justifies the film’s existence. The rising star of The Hunger Games plays Starr Carter, a smart kid in a troubled African-American neighbourhood. Her dad (Russell Hornsby) has cleaned up his act after a spell in prison and set to running a successful local store. Her mom (the consistently excellent Regina Hall) remains a pillar of strength while pressures surge on all sides.

Talking us through an uncomfortable choice, Starr tell us that the local high school “is where you go to get jumped, high or pregnant”. With that in mind, her parents have paid to send her to a posh private school that – though nominally inclusive – only allows less threatening manifestations of diversity. This allows Starr a decent education. It also allows investigation of the questions mentioned above.

The tensions come to a head when cops stop Starr and an old pal from the hood while the pair are driving home from a party. It says something about the current American condition that – as with similar scenes in Get Out and the upcoming Widows – we immediately feel for the safety of the passengers. Prevailing culture layers the sequence with an inherent tension. Things go badly and Starr’s world implodes.

There has already been a lot of debate around The Hate U Give – its title derived from Tupac – but nobody sane has been questioning Stenberg’s contribution. The young actor has the gift of spreading warmth wherever she goes, and her intelligence shines through in every scene.

Stenberg also has the ability to listen convincingly. It sounds like a small thing, but it is important in a film so fraught with debate.

The Hate U Give clocks in at well over two hours, but there is so much going on that it never drags. There’s humour mixed in with the tragedy. There’s reason mixed in with the rage – perhaps too much reason for some. Though the film is charged with anger, it skews towards compromise and strives for balance. The first ending stirs the blood. The second spreads a slightly sickly balm across the narrative.

Very worthwhile, for all that.

YA fiction: Children of Lir’s Aífe tells her side of the story
7