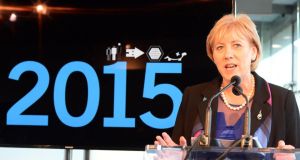 There will be “zero change” in spending on the arts as a result of Budget 2015, according to the Department of Arts, Heritage and the Gaeltach t. The current expenditure allocation of €212 million for 2015 is €4 million higher than for this year’s allocation of €208 million.

However, the €4 million is taken up by the allocation for funding for the Easter Rising commemorations.

Funding for the Arts Council, the Irish Film Board and the national institutions is also likely to remain the same, despite a warning from the National Library of Ireland that its services would have to be severely curtailed unless there was an increased allocation.

The library warned that it needed an extra €1.25 million in this year’s budget just to keep existing services. Its funding has been cut by more than 40 per cent since 2008.

Abbey Theatre director Senator Fiach Mac Conghail said arts funding was effectively cut when inflation was taken into account. “We find this very disappointing. That’s the general view across the sector,” he said.

He maintained the sector had endured disproportionate cuts since the recession started and many of the cultural institutions were “at breaking point”.