Singers will appear in Waiting for Shakespeare and Falstaff and more 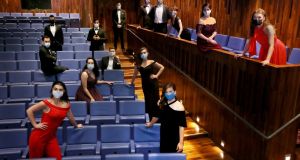 The Wexford Factory, Wexford Festival Opera’s academy that offers professional and financial support to singers in the early stages of their careers, is at the heart of this year’s Waiting for Shakespeare, The Festival in the Air, which will feature Factory participants in Rossini’s Petite messe solennelle, scenes from Verdi’s Falstaff and Andrew Synnott’s new Lucrece. Michael Dervan talks to four of the singers.

Why singing as a career? I started singing lessons in secondary school, then in sixth year I went to Mary Brennan part-time in the Academy. When it came time to decide what I would do after my Leaving Cert, that’s when the decision was made, and I chose it because I just love it.

What is the hardest thing about working in opera? Juggling all of the separate components. You’re learning a language, have to get the courage to go out on stage, are trying to memorise it all, trying to get the rhythm and the notes right, and the acting . . . that’s when all those components get difficult.

The easiest thing?  Going to it [she laughs]. I think because I have such a love for it, it’s easy for me to practise it and to want to do it all the time.

Career highlight to date? Probably when I heard myself on RTÉ lyricfm on the radio for the first time. That was emotional. And winning the RDS Music Bursary.

Your biggest takeaway from Wexford Factory? Meeting all the amazing people that I’ve met here and just trying to soak up all their wisdom. It’s also made me excited for my career in the future, to be doing an opera festival.

Would you be buddies with Nannetta, your character from Falstaff? Yes. Because she’s a little bit scheming. So I would.

You mightn’t know it about opera, but . . .  What makes it easier to try and start a career in opera and to perform often is having people that you love and support around you. Because without them it’s impossible.

Why singing? I always wanted a place to perform. I had a lot of energy I needed to get out. I grew up in Limerick, so we didn’t see opera. I started with a singing teacher when I was 10, just because I liked to sing. She said there was somebody in Dublin who might see you, though not until you’re 21. It was Ronnie Dunne. She said, Great, see you next week for your lesson.

Why opera? It’s my passion. I love to sing. I love to be on stage, and telling a story. There’s a safety and stability I enjoy being with other people that I know, all creating something together from scratch. Every day there’s a new layer.

What’s hardest? We were talking to Julia Lagahuzère from Opera for Peace. She was great. She said, “You go on stage. You have your applause. Then you go into a lonely hotel room.” The difficulty is instability, dealing with criticism and rejection, which everybody has to do.

What’s easiest? Nice people! [she laughs]. Rehearsals, arriving together for a run-through, sitting back, listening to your colleagues.

Career highlight? Probably singing at the Salzburg Festival last year, a young singers’ project in the Kinderoper, the children’s opera. I taught children for a couple of years. I love kids. That was really special.

Biggest takeaway? To persevere and not to give up. I always tell myself that you’re one audition away from your job – there will be one audition where somebody will see in you and believe in you.

Buddies with Nannetta? Oh, yeah! I think so. Absolutely. It’s much easier when I have a role I can find a kind of physical embodiment with. She wants everybody else to be friends with each other, and I think I’m the same.

You mightn’t know it, but . . .  We’re just normal people in the world of opera. We love other things in life, too.

Why singing? It almost chose me. I chose acting, firstly. I thought I was good at it, and enjoyed it more than anything. When I did some singing, someone asked if I’d ever thought of getting my voice trained. I wanted as many strings to my bow as possible, and Vivian Coates, who had given me small roles in musicals, put me in touch with Emmanuel Lawler at the DIT.

Why opera? I sang a lot of different types of music, with bands, singer/songwriter things, musical theatre. But opera, vocally, is just such an experience to sing. The compositions are so much better than anything else you’ll come across. It’s such a step up.

What’s hardest? I find memorising languages to be particularly difficult.

What’s easiest? The acting side of it, the characterisation is just something I can step into quite easily.

Career highlight? I’ve only been working professionally for about three years. This week has been such a highlight. Maybe in contrast with six months of darkness, it seems that much brighter.

Biggest takeaway? The Italianate side of the approach to singing. The coach Carmen Santoro has just been quite extraordinary. She just has this knack for understanding your voice and fixing issues.

Buddies with Falstaff? I don’t think we’d be fast friends, but I think we’d get on.

You mightn’t know it, but . . .  People see it as a very glamorous job. But 99 per cent of your work is just sitting at a piano banging your head against the wall, trying to learn languages you don’t speak and understand characters that don’t have that much in common with you.

Why singing? I wanted to tell stories, basically. To relate to people in an audience and give them an emotional experience. I always sang, Frank Sinatra, musical theatre. And then I watched an opera . . .

Why opera? Because of a pivotal experience I had when I was a teenager. I saw Madame Butterfly in Belfast. I was going through some, in a way, similar issues. I was a vulnerable teenager. I just instantly connected, on a very deep level.

What’s hardest? The networking aspect. It’s not just how good you are, how prepared you are, or your capabilities in your performing. It’s also how you’re able to sell yourself.

What’s easiest?  Sharing emotions. Telling a story. Being open to expressing what the music makes me feel.

Career highlight to date?  Here in Wexford. Guglielmo Ratcliff. I played Willy. It was Mascagni, gorgeous music. The director Fabio Ceresa treated me like an equal. He wanted to hear my interpretation, what I thought of the character. It was a very small role. But he treated me with such respect.

Biggest takeaway There was ten minutes when I just happened to be in the theatre and Rosetta [Cucchi] said, could you come here a sec? She was talking to the pianist about piano skills . . . and I got to perform with her. Singing with someone like Rosetta made me so much better. It was like I had this partnership with her. She brought out the best in me.

Buddies with Meg? I’m focusing so much more on Lucrece [in Andrew Synnott’s new opera]. I’m so like her. Work now, play later is one of the lines. It talks about sacrifices of the career, sacrifices that your family also have to make . . . It’s really similar to me.

Precious time with a parent during Covid-19
8