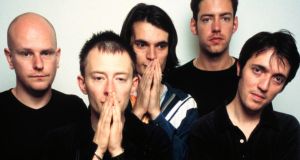 Radiohead: the band in 1997, when they released OK Computer. Photograph: Jim Steinfeldt/Michael Ochs/Getty

Radiohead have released a vast collection of unreleased tracks made during the sessions for OK Computer, their 1997 album, after a MiniDisc archive owned by the band’s frontman, Thom Yorke, was hacked and the recordings reportedly held to ransom for $150,000.

The band have now made the 18 MiniDisc recordings, most of them about an hour long, available on Bandcamp for £18, or just over €20. Proceeds will go to the Extinction Rebellion climate-action movement.

The band’s guitarist Jonny Greenwood confirmed the hack, and said: “Instead of complaining – much – or ignoring it, we’re releasing all 18 hours on Bandcamp in aid of Extinction Rebellion. Just for the next 18 days. So for £18 you can find out if we should have paid that ransom. Never intended for public consumption (though some clips did reach the cassette in the OK Computer reissue) it’s only tangentially interesting. And very, very long. Not a phone download.”

Thom Yorke wrote of the 1.8GB collection: “It’s not v interesting. There’s a lot of it… as it’s out there it may as well be out there until we all get bored and move on.”

Extinction Rebellion thanked the band, describing its gift as “unprecedented support”. Radiohead authorised the use of their song Idioteque for a new Extinction Rebellion promotional video. “The climate and ecological emergency demands courage, truth-telling and generosity like never before,” the group said. “We are so grateful to Radiohead for showing us how that’s done, both now and in the lead-up to the April rebellion. Words are inadequate but actions do change the world.”

The hack was first discussed on a Radiohead page on the website Reddit a week ago, where a user described being offered the files for sale. “We originally considered pooling our money together, as our enthusiasm over the rare opportunity to share material of such high historical interest for a band we love peaked, but were concerned about the ethics of the situation,” they wrote. “According to [the leaker], they got the whole 18 hours of material by trading some other rare/unreleased material for it.”

The files are a trove for Radiohead fans. Along with demo versions of OK Computer tracks, they feature a full-band version of True Love Waits, a live favourite that was finally recorded in a piano arrangement for the band’s 2016 album A Moon Shaped Pool. Much praised on the Reddit forum is an alternate version of Lift, a song that was eventually included on the 20th anniversary reissue of OK Computer – the alternate version, at the 10-minute mark of the MD125 recording, features an anthemic arena rock arrangement.

The collection opens with a version of Exit Music (For a Film) with alternate lyrics, including the line “living in a glass house”, which later cropped up on Life in a Glasshouse on Amnesiac.

Disc three contains an 11-minute version of OK Computer’s lead single, Paranoid Android; its entirely unreleased songs include Attention and Hurts to Walk. There’s also a snippet of Thom Yorke beatboxing. Fans have posted a document online that outlines the identity and likely provenance of each track. – Guardian

The real Sound of Music: Maria was no flibbertigibbet, and she didn’t teach the kids songs
8