Your idea of musical hell? – a Q&A for composers and musicians 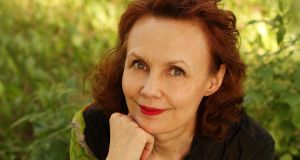 First intense musical memory? One I mention often, but it might not be the first, I was six years old and I was listening to the radio at our country house. It was music by Johann Sebastian Bach. I really loved that music, and it was really beautiful listening to it in the middle of nature. I learned that Bach means “little river” and I was very happy about that.

Your musical idol, or the nearest you have to one? The nearest would again be Bach. I admire different pieces by many composers but I never had that identity question with composers. Maybe this is because I was a girl.

The composer you wish was better known? There are many. One would be the Norwegian composer Fartein Valen, whose music has really touched me always. He’s very unknown, but a strong and specific personality. There are many wonderful composers and somehow destiny hasn’t brought them to everybody’s ears yet.

If you had a musical time machine? This starts to sound quite obsessive, but I think it would be fantastic to hear Bach play. Otherwise, maybe Enescu. I often wonder what kind of personality he was.

Musical hell? Musical hell is everything that is contrary to the perfect experience, and combined with unmusical music-making. That’s the most difficult thing always. If the musicians don’t understand the music it’s very, very painful.

If you weren’t a musician, what might you have become? I feel I could not have lived without becoming a composer. Even now, 40 years on, I cannot imagine what else I could have been. Maybe somebody who works for ecology or something like that. I don’t know what the real answer is.

First intense musical memory? Kaija’s [Saariaho] first opera, L’amour de loin, was premiered in Salzburg and it was one of the first pieces I really got to know deeply [Neige Barrière is Kaija Saariaho’s daughter]. I was four or five. It was a really rainy summer. My brother and I had to stay inside and sit in the rehearsals. By the end of the summer we knew the whole opera from memory.

Your musical idol, or the nearest you have to one? For historical performance it would have to be Rachel Podger. Hearing her in the Bach sonatas and partitas on CD changed my approach to violin playing. And my parents and brother have been a huge source of inspiration in my work.

The composer you wish was better known? I think French baroque composers like Couperin and Rameau are quite under-rated internationally.

If you had a musical time machine? Bach is the father of violin playing, he has given us some of the greatest pieces in our repertoire. I would just love to talk about it with him.

Your idea of musical heaven? Both as a listener and as a performer, a successful performance is when you feel you have managed to communicate something with the audience. When you feel that you’ve offered a message and you’ve said your heart out, that’s what music should be about. If it were only easier to achieve that.

Musical hell? Programmers who place together monumental works that have nothing to do with each other just to attract audiences.

If you weren’t a musician, what might you have become? I have no idea. I cannot imagine doing anything else. Something related to art, probably, or trying to do some good in the world.

Your musical idol, or the nearest you have to one? I cannot answer this question. I could give you many, many names. But just to give you one? It would be like cutting off a leg or a finger.

The composer you wish was better known? I think we don’t hear enough music coming from all over the world. So I would like more interest and openness to African or oriental and other styles of music.

If you had a musical time machine? I would remain here. History has been very hard for women writing music and composing. I think that where I live is the best moment. There is no one I would like to visit individually.

Your idea of musical heaven? In Brazil a few years ago I was astonished the way people in the street could stop, and start singing and playing together in very interesting musical ways. I think that heaven on earth for me would be if our culture were much more practised in every day and in every place.

Musical hell? Music can have almost a fascist effect. It can really be the best but it can also support the forgetting of self in a negative way.

If you weren’t a musician, what might you have become? A fool. I would be nothing. I cannot imagine it. I would be lost.

First intense musical memory? Hearing the Stravinsky ballets for the first time, The Firebird, The Rite of Spring and Petrushka. I was a classical pianist. It was Christmas 1967, probably. There was a famous three-LP set of those ballets conducted by Stravinsky. That just blew my mind.

Your musical idol, or the nearest you have to one? Leonin, of the Notre Dame school, late 12th century. After all, he invented polyphony. That’s a pretty good achievement. He was one of the composers of organum in Paris. And then, maybe Lou Harrison, a student of Henry Cowell and a friend of John Cage, and a patriarch of music on the west coast [of the US]. He was a mentor and friend.

The composer you wish was better known? Who wants to be in the mainstream? I don’t care. I never wanted to be locally famous. I’d rather be a small fish than a big fish, just as long as I get to swim in the big ocean and not in a small pond. Perhaps Michael Byron, a contemporary of mine. I think he’s writing some most exciting music. He’s like our Jackson Pollock, and he gets very little recognition.

If you had a musical time machine? I’ve met a lot of interesting people, so I don’t feel I have any lack, but the one person I’ve always wished I’d seen perform live is Clifton Chenier. He was a Zydeco accordion player from Louisiana. I always wished I’d seen him in concert. He died in 1987. All these other composers, just as long as they’re good drinking partners it would be fun to meet them. But otherwise I don’t know if I’d really want to meet any of them.

Your idea of musical heaven? Being in the midst of a Javanese shadow play, maybe. Or being in a room with some traditional musicians from Mexico, the music is fantastic and the ambiance really nice.

Musical hell? Being in a concert of really boring academic composers, of which there are an abundance.

If you weren’t a musician, what might you have become? A shadow puppeteer, maybe. I’ve never wanted to be anything other than a musician. Or maybe, given the political history of this century, a guerilla.

First intense musical memory? My mother was an amateur pianist. I used to sit right next to her or crawl under the piano and just listen. The music that haunted me or attracted me the most was the piano music of Debussy.

Your musical idol, or the nearest you have to one? It’s so hard to narrow it down to just one. I’ve always really loved Couperin’s music – I was also a harpsichord player. Morton Feldman is somebody I have felt close to over the years. Or early John Cage. His Second String Quartet is probably one of my all-time favourite pieces. And Satie.

The composer you wish was better known? Aldo Clementi. He is no longer living, but his music is all built out of canons and I’m just wild about it. Maybe his music is just a little bit too austere for most people.

If you had a musical time machine? That’s pretty scary. Chances are if I went back and had some questions for Satie or Stravinsky or even Bach, they might not even give me five minutes. If all things were equal, I have quite a few questions for Stravinsky.

Your idea of musical heaven? It would be great to have an orchestra that’s just there for you, so you could hear things when you needed to.

Musical hell? What’s difficult for me is music that is very rigid – music that’s unrelenting in pulse, that has no breath to it, I find that kind of hellish. I’m not really good with steady state electrical pulses, for instance. For me, that’s a nightmare.

If you weren’t a musician, what might you have become? I often think it would have been nice to be a painter.