Version aversion: Going the covers route brings out the best – and worst – in bands

Neil Young’s surprise covers album of 1960s standards, ‘A Letter Home’, is a reminder that there’s an art to interpreting other people’s work – and not everyone makes the cut 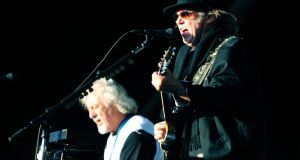 By the letter: Neil Young’s covers album is only available on vinyl, and it’s a stunner. Photograph: Aidan Crawley

‘An unheard collection of rediscovered songs from the past, recorded on ancient electro-mechanical technology” is the rather grandiloquent quote that accompanied the surprise release this week of a new Neil Young album. Only available on vinyl, A Letter Home is a stunner.

Before Please Please Me (1963), most every album was a covers affair. The Beatles debut album was crucial because, as Rolling Stone once wrote: “It brought in the idea of the self-contained rock band, writing their own hits and playing their own instruments”. Even so, Please Please Me contained six covers. Because covers is what everybody did in those days.

Once the idea of a band actually writing their own material took hold, the covers album sloped off. What had worked so well for Sinatra and Presley now looked a bit like “cheating”.

Something always forgotten about David Bowie is how he single-handedly reintroduced the covers album idea with his 1973 Pin-Ups , which featured songs by Pink Floyd, The Who, Van Morrison and The Kinks. If the coming man of popular music was down with covers, then it was all okay again.

Two years after Pin-Ups,John Lennon released his Rock’n’Roll album and produced some of his finest-ever vocals as he got up close and personal with the music from the late 1950s, music which had so fired him up as a teenager.

But it’s an awkward beast. The Beautiful South’s Golddiggas, Headnodders and Pholk Songs (2004), for example, was a lovely mess of an album. They butchered Travolta and Newton John’s You’re the One That I Want but worked wonders with ELO’s Livin’ Thing and The Ramones’ Blitzkrieg Bop.

It can be a career-saver: UB40 were seriously struggling before they had the idea of covering Red, Red, Wine, Many Rivers to Cross and Cherry Oh Baby on their Labour of Love album. But it can also all but finish off a band. After Duran Duran released Thank You (accurately known as “the single worst album in the history of recorded music”) in 1995, they really never got over the trauma of the critical firing squad. One of the more printable reviews had it that even when they were covering a Led Zep song they made it sound like something by Chris De Burgh.

Johnny Cash turned the covers album into an art form with The Man Comes Around (2002). What he did to Trent Reznor’s Hurt is a minor miracle – and the video is one of the best ever made.

A truly great cover can mean, weirdly, that Bob Dylan now plays the Jimi Hendrix cover of All Along the Watchtower instead of his own take on the song. (Dylan simply admitted defeat.) But for every success story you have Kylie Minogue covering The Clash, which in any civilized society should carry a lengthy prison sentence.

The best covers album of all time? That would be If I Were a Carpenter, a 1994 tribute to The Carpenters. Sonic Youth’s Superstar is the standout track.
bboyd@irishtimes.com

The Music Quiz: What song did the BBC say was 'too depressing' to play?
7