‘Uilleann pipes make a comprehensive argument for their own majesty’

Donal Dineen explores the ‘staggering’ sound of the traditional instrument, with the help of rich visuals 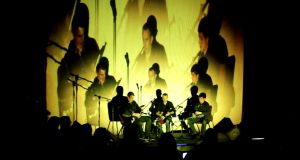 More power to your elbow: The Pipes, The Pipes at the Dock

Uilleann pipes are often confused with the bellicose bagpipes, meaning some people may give them a wide berth. Donal Dineen, DJ, broadcaster, photographer and film-maker, is on a mission to right that wrong, with an audiovisual homage to the sound of the instrument, called The Pipes, The Pipes.

“Once you hear them, they make a comprehensive argument for their own majesty,” he says, recalling his first encounter with the pipes by way of Leonard Barry’s playing in Dineen’s home more than 10 years ago. The experience floored him, such was the impact of this human-like instrument, with its lung-like bellows, chanter and bag, and its octopus-like regulators and drones.

Although Dineen was born in the heart of Sliabh Luachra (Rathmore, to be precise), he “utterly rejected” traditional music from an early age, pursuing his own musical path by listening intently to radio. Throughout his teen years, music represented to him a metropolitan dream, as he set out on his quest for identity, looking out, as he says, “on that giant 1970s screensaver called the sky”.

However, while in college, Dineen did find himself taking photographs of Johnny O’Leary, the late, great Sliabh Luachra accordion player, in Dan Connell’s famed pub in Knocknagree. He also came across Noel Hill and Tony MacMahon’s seminal recording In Knocknagree. For Dineen, it was “one of the best-sounding live albums I’d ever heard”, and gradually his ears began to prick up to the riches of the tradition.

Tears in his eyes

Although a committed explorer of sound, nothing prepared him for the experience of hearing the uilleann pipes. Not John Coltrane or Pharoah Sanders or Brian Eno. “I was just struck by the all-encompassing range of the sound, by the size and the force of it. I felt like some kind of spirit within the house had been reawakened. There were tears in my eyes, and I thought to myself, Oh my God, what have I been missing here? And since then I’ve been fascinated by the pipes as a machine. And I’m speaking as a non-musician,” he says.

Dineen has long been in the thrall of pictures, both still and moving. During his years presenting the television series No Disco (1993-2003), he screened many videos that he had created to accompany the sounds to which he was introducing a generation.

“I’m coming from an angle, as a non- musician, of not knowing how the hell one person operating one machine can make such a staggering sound, and the control that you have to exert to corral that sound is, to me, a great mystery. Over the years, I have developed an immense love for the uilleann pipes and a great interest in their history and their significance,” he says.

Dineen is working with French electro video maker Lionel Palun (who has worked in dance, opera and classical) to create a visual accompaniment to the sound of three pipers playing together. Palun works using video feedback, layering images to create traces that thread the listener and viewer down pathways. This might be the first picture show that maps a landscape all too often alien to our ears.

“I suppose we’re trying to absorb the elemental forces of the sound, and then we try to create something to match the movement of the music with visual shapes and rhythms, created from everything from leaves to feathers and ribbons,” Dineen says.

The tableau that emerges will, he hopes, “feel like it belongs to the sound that we’re hearing”.

Dineen feels his latest project is another step on a journey he has been on for decades. The Pipes, The Pipes – which is supported by the Arts Council and by the Dock in Carrick-on-Shannon and produced by Siobhán O’Malley – is his latest attempt to get beneath the skin of the sound worlds he constantly pursues.

“I think that my work in the area of video and visuals has been about approximating in some way my feeling for the music without creating the sound itself. It’s about getting as close as possible, and it has allowed me to step into that arena, the stage, the core of performance. At its best, it’s like being the fifth member of the Beatles, where you’re part of the sound,” he says.

The pipes have a very definite identity and character sonically, and in the show Dineen is centrally involved in the creation of something that interacts with the sound itself. Bringing the show to Paris proved a turning point.

“Now it’s reactive, rather than interpretive, in that we’re responding to what we’re hearing in the music, which creates a kind of circular pattern. There’s something symbiotic happening between the sound and the visuals,” he says.

“But I would never claim that the visuals have a bigger part to play. They’re there to complement or accentuate that mood of the pipes. I would never say that it’s something that you should watch or that it means something. It doesn’t mean anything. It merely embellishes the sound that the pipes make.

“Often, the sound of the pipes is so dense and complete that all I want to do is close my eyes, because there’s hardly any room to open up a picture box of any sort, but having arrived at a more sensitive way of working with the pipes, I now really believe in what’s happening with this show.”