U2 hit 40: The ‘drummer seeks musicians’ note that started it all

Auditions for the ‘Larry Mullen Band’ were held on September 25th, 1976, in the drummer’s kitchen

All of U2's albums and how many were sold in under 30 seconds. Video: Paul Scott 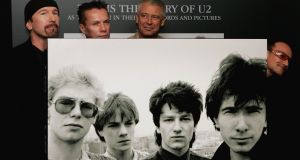 The Edge, Larry Mullen Jr, Adam Clayton and Bono at a signing of their book “U2 by U2”, in London, 2006. Photograph: MJ Kim/Getty Images

“Drummer seeks musicians to form band.” This was the handwritten note 14-year-old Larry Mullen put on the bulletin board of Mount Temple School in Dublin, just after the long, hot summer of 1976.

Auditions for the “Larry Mullen Band” were to be held on Saturday, September 25, 1976 in Larry’s parents’ kitchen in Artane. First to arrive was David Evans (The Edge) who didn’t really say much.

Adam Clayton swanned in later wearing a full-length Afghan coat – he immediately appointed himself not just the Larry Mullen Band’s manager but also their bass player. Paul Hewson (Bono) was last. A fidgety and earnest ball of energy, he was auditioning to be the band’s guitarist, but when it transpired he couldn’t play the guitar, Larry suggested he try vocals instead. 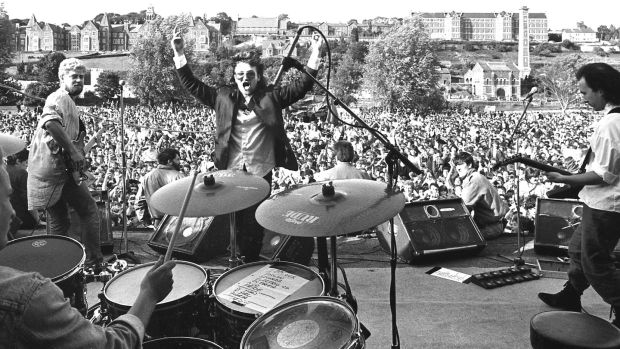 Called The Hype, then Feedback, then U2, the band won their first award 18 months after that first rehearsal. In March 1978 they won a talent contest in Limerick: the prize was £500. “We hope to be able to buy a van,” Bono told the Evening Press newspaper.

They bought a van, got a real manager in Paul McGuinness and played anywhere that would have them. In 1980 they signed a recording contract with Island Records.

U2’s debut album Boy (1980) showed promise and potential aplenty but the “difficult second album”, October (1981), was poorly received¨. There were moves to drop the band from their contract.

To add to the uncertainty, three members of U2 (Bono, Edge and Larry) were members of a Christian evangelical group in Dublin and were been asked to decide between their faith and their rock ’n’ roll lifestyle. They chose rock ‘n’ roll.

The next album, War (1983), knocked Michael Jackson’s Thriller album off its residency at the top of the UK album charts. 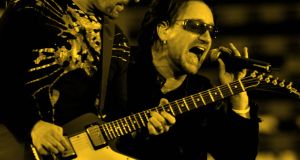 A memorable Live Aid appearance in July 1985 and six-month stretches in the US helped them towards their status as “the biggest rock band in the world”.

In 1987, The Joshua Tree became a number-one hit in more than 20 countries.

By now, the Stetson-wearing, cigar-chomping, Enormodome-playing band was far removed from their New Wave roots, and the passion plays of their early shows in McGonagles and The Dandelion Market. 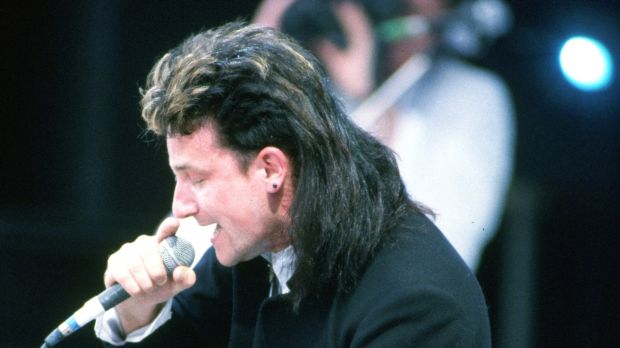 On New Year’s Eve 1989, after a decade that had seen them go from playing in a room above a pub in Coventry to selling out Madison Square Garden, Bono announced from the stage of Dublin’s Point Depot that U2 were “going to go away and dream it all up again”.

They caught the last ever flight into East Berlin in 1990 and went into Hansa studios with the intention of “taking an axe to The Joshua Tree”.

When they emerged with Achtung Baby in 1991, they had found new musical toys to play with – and leather trousers, sunglasses and irony as well.

The Zoo TV tour of 1992-1994 – a multimedia, sensory overload travelling music circus – rewrote the rulebook for how live music was staged. They followed it with the equally ambitious PopMart tour of the late 1990s. In the new millennium, they switched gears again and stripped down both their albums and their live performances.

For their 360 tour of 2009-2011, they changed it again by building a massive structure called “The Claw” – a stage configuration that allowed the audience to surround the stage. With 7.2 million tickets sold, 360 went on to become the highest earning music concert tour of all time.

In their 50s, U2 travelled back to their teenage years in Dublin for their last album, Songs of Innocence (2014), and will be looking back again with the soon to be released companion album, Songs of Experience. 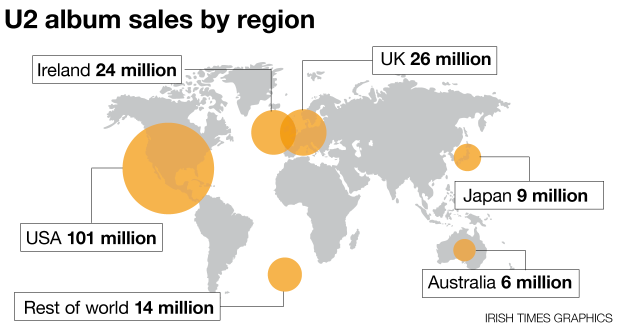 Their last tour, Songs of Innocence and Experience, earned them some of the best live reviews of their long career. They will hit the road again next year for their 14th jaunt around the globe.

From the first rehearsal 40 years ago in Larry Mullen’s kitchen, they’ve gone on to become – with 175 million albums sold and more Grammy awards (22) than any other band – one of the most successful bands in history. 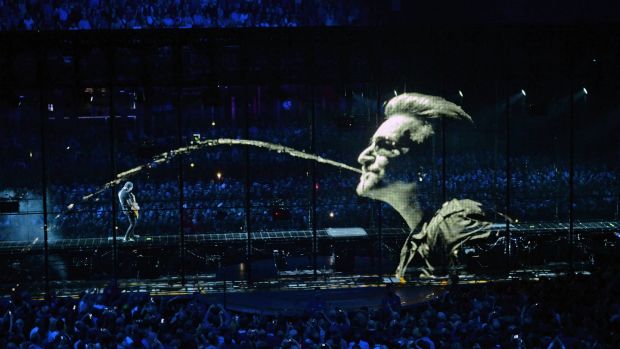