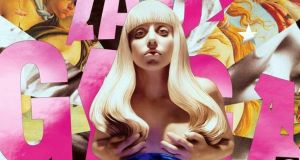 A detail from the cover of Lady Gaga’s Artpop (2013) by Jeff Koons. Label: Interscope Records

There’s more to that record collection you’ve begun to accumulate than the sounds on the grooves. In front and around many great albums is very often a great artist who has produced the artwork for the sleeve. The musicians who’ve made the record in question will have done their job, but it’s often their choice of who gets to do the visuals for the sleeve which sets a defining tone for the album in question.

Flick through your collection and note the artwork which stands out. Patti Smith’s Horses is forever associated with that Robert Mapplethorpe photograph. Sonic Youth’s Goo might not be the same without Raymond Pettibon drawing from his Pettibon With Strings ’zine. Andy Warhol’s work for The Rolling Stones and Velvet Underground has become cultural shorthand which transcends both bands. It turns out that your music collection is a bit of an art collection too.

The collaboration between musician and artists is one which writer and art historian Francesco Spampinato explores in his new book Art Record Covers. It contains over 500 examples of how the match-up has produced a range of iconic images and a number of essays and interviews which provide some context to the artwork.

It’s always interesting to see where the spark to bring art into the mix comes from. In many cases, it’s the presence of artists in the band who provide the impetus. It’s no surprise, for example, that Sonic Youth feature so heavily in the book thanks to the presence of visual artist Kim Gordon in the band and the work produced for their releases by the likes of Pettibon, Mike Kelley, Richard Prince, Gerhard Richter, Richard Kern, Jeff Wall and Marnie Weber. Meanwhile, you’ve psychedelic folk artist Devendra Banhart showing that he can produce striking artwork as well as superlative music.

Spampinato is keen to show that the hook-up between musician and artist is not some relatively new phenomenon and did not involve just a certain coterie of artists. US comedian Jackie Gleason worked with Salvador Dali on the sleeve for his 1955 album Lonesome Echo (the artist described the image as provoking emotions “of anguish, of space and of solitude”), while there’s some beautiful examples of Joan Miró’s work on sleeves for Salvador Espriu and Raimon.

Sometimes, the work of an artist very much conjures up a specific time and place. The vivid colours and figures populating Keith Haring’s artwork for releases by Run DMC, Malcolm McLaren, David Bowie and Sylvester is an immediate throwback to the downtown New York scene of the early 1980s. Similarly, William Eggleston’s photos are clear signifiers of a wild, weird America so it’s no surprise to see his work used by artists like Big Star and Primal Scream who want to evoke that world.

For many artists, the collaboration provides a brand new audience for their work. Spampinato notes that “artists who emerged in the 1980s and 1990s felt inspired by pop culture and embraced such commissions to free their work from the constraints of the art world”.

For the musician, the appeal comes down to just how involved they want to be in the process and especially how the economics of the modern record industry impact on the budget. Nevertheless, it’s clear that musicians with an art leaning like Kanye West (who has tapped Takashi Murakami, George Condo and Kaws for his sleeves), Lady Gaga (who worked with Jeff Koons on Artpop), Anohni and Bjork are set to ensure you have the makings of an art gallery on your hands when you buy their new records.

John Boyne: Why I support trans rights but reject the word ‘cis’
7