Timbaland strikes back in Empire 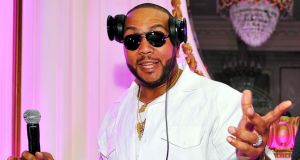 There are a lot of good things about Empire, Fox’s record- smashing family hip-hop melodrama. There’s the resurrection of Ilene Chaiken, back from The L Word. There are the cameos from Naomi Campbell and Courtney Love. There’s the excellent cast. There are Cookie’s one-liners.

But what makes the whole thing pop is the music, a credible soundtrack that flies just on the right side of cheesy. When it comes to comebacks, we did not expect Timbaland’s to look like this. Timbaland is the executive music producer, giving the soundtrack not just some cred, but making it a core part of the show, without distracting from the plot.

Post-Glee, TV audiences are ready to take a leap of faith with music-driven shows, such as Nashville. But Empire moves away from corny covers and uses the music to plunge you into a world where bling is still a thing and the solar system is made up of Rihanna-like planets and Frank Ocean-like stars.

Timbaland’s hit-making abilities are not up for question, but the Dynasty fan (yep) had gone off the boil of late, hitting a pre-Happy-Pharell-type trough in his career. But Empire has to be a peak, and an unlikely one at that. Timbaland is well aware of how the TV show marks a next stage for him, telling Vanity Fair that it is part of a first step on his reinvention, something he feels the greats do every six years. With Opera Noir, his first album in six years, on the horizon, you can’t help but

feel Timbaland is going to be bringing some serious heat back into a game that he had a huge role in crafting.