The world won’t listen to Marc Carroll – but it should

The Dubliner counts Bob Dylan and Neil Young among his fans and gets rave reviews for his music, but you’ll never hear him on radio 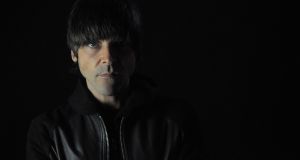 Marc Carroll: “I actually did wonder if it was worth making another record – would anyone care or listen to it?”

The world won’t listen. The Dublin musician Marc Carroll has had his songs featured on the official websites of Neil Young and Bob Dylan; Brian Wilson has acclaimed his work; members of Big Star and Elvis Costello and the Attractions jumped at the chance to play on his new album. He’s the sort of musician who routinely picks up glowing reviews from the likes of Mojo and Uncut, but he’s about as likely to be heard on radio or TV as he is to be seen in the charts.

Carroll, now 43, has just released his 17th studio album (not to mention 22 singles) since 1998 in the acclaimed Love Is All or Love Is Not at All. As with his previous six albums, he will most likely get another bunch of superlative press review cuttings for his career scrapbook before heading back to Los Angeles, where he now lives, to begin work on album number eight.

He has his enablers within the industry. The record label bosses (for both majors and indies) who have signed him over the years love his work, admire the quality of his songwriting and know that he has some big-name fans (including Hüsker Dü’s Bob Mould and folk legend Eric Bogle, both of whom have insisted he play with them). The problem, commercially speaking, is that the sales and marketing team don’t know what to do with him or his music; and Carroll is not one to jump through media hoops for the sake of publicity.

To contextualise it: when the hit US sitcom Friends was at the peak of its commercial power, the producers of the show were so taken by Carroll’s music that they had him sing and play one of his own compositions during a key wedding scene in one episode. That sort of exposure to a global TV audience of millions would usually break an artist worldwide, but the opportunity was fumbled.

It also hasn’t helped Carroll’s cause that one of the record labels he was signed to over the years dropped him on the very day his album was released, and another label paid for an album to be recorded but never released it. Then there are Carroll’s ineffable musical stylings. He is influenced as much by Crass as he is by Dylan, as much by Buddy Holly as Chuck D.

Given his influences, he was thrilled beyond expression to record his last album, Stone Beads and Silver, with members of Bob Dylan’s touring band at Levon Helm’s studio in Woodstock, New York state. And just to square the circle, Crass main man Penny Rimbaud cowrote the title track on this new release.

“There was minimum circulation on the last album,” says Carroll, wrapped up like a Los Angeleno in the Arctic as he sits in a Sandymount pub. “I actually did wonder if it was worth making another record. Would anyone care or listen to it? But ultimately such questions are irrelevant because this is what I do. This is my life.”

“I had this instrumental track and I sent it to Crass. Penny Rimbaud came up with a poem entitled Love Is All or Love Is Not at All, and that was the springboard that I needed to see the record through. I’ve been a fan of Crass for over 30 years; these are people who never seek admiration, credit or praise. They couldn’t care less if you like what they do or not – it’s the doing of it that counts, the end result.”

It scarcely needs pointing out that Carroll could be talking about himself here.

On Carroll’s new album, electric folk meets Americana meets New Wave stylings. He used his forensic musical ear to bring in guest players. “I knew I wanted a machine-gun precision sound for the drumming on Ball and Chain, so I got Pete Thomas, the drummer with the Attractions, in for that. I had heard Noel Langley play beautiful trumpet on the great Bill Fay album Who Is the Sender?, so I knew he was ideal for a song called A Child In Midstream, and Big Star’s Jody Stephens was the only person who was ever going to play drums on a track called Lost and Lonely.”

Progress was impeded when the producer of the album and Crass’s Penny Rimbaud both suffered massive heart attacks during the recording. But with the backing of Carroll’s current label, One Little Indian, the finished product has just hit the shops with striking cover artwork by Gee Vaucher (perhaps the only visual artist namechecked as an influence by Banksy).

The current single off the album, Ball and Chain, has been tweeted by David Crosby, and the video for the song is currently on Neil Young’s official website. Unlike the rest of the album, it’s a full-on guitar stomp with all the energy and drive of a late 1970s New Wave single. It is also an uncompromising political statement about the shattered state of today’s world.

“Ball and Chain comes from a sense of deep sadness for what is going on these days,” says Carroll. “The video that accompanies it has been described as ‘hard- hitting’ [it features footage of bombings, squalor and protest movements] and we were under no illusion that the mainstream media would ignore it. But what was surprising was the reaction of so called alternative media. Vice.com, for example, didn’t broadcast it – but then Vice is part-funded by Rupert Murdoch. Similar with Pitchfork; they claim to be the voice of the new counterculture, the information highway for new and interesting music, but they are owned by the same company who publish Vogue and gave the tyrant Tony Blair the Man of the Year award.”

Carroll was asked to place a “Warning – This May Distress” sign before the video was screened, but as all the footage contained in the video was out there already, he didn’t see the point.

“If there is an idea behind the video to Ball and Chain it is the hope that people are empowered to find solutions beyond hatred and the abuse of power. It is heartening that Neil Young hosted the video and David Crosby tweeted it across social media. I don’t need some bearded clown in Williamsburg or Shoreditch to tell me what to do.”

Being based in Los Angeles means live appearances this side of the Atlantic are difficult. Carroll regularly plays live in the US, usually accompanied by members of Brian Wilson’s backing band.

“I was thinking about it the other day and I realised I hadn’t played an Irish date in over 10 years. It would be good to do something soon,” he says. “Nothing has really changed that much with me during those last 10 years. I still have just the one guiding life principle. The music is for sale: I’m not.”

Róisín Murphy: If I want to be famous I can just go to a gay club
8