The Script to play in Croke Park next year 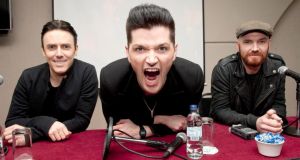 After much speculation over who will play Croke Park next summer - some of it involving Garth Brooks - Irish rockers The Script have been be unveiled as the headline act.

The Dublin band will play the stadium on June 20th.

Meanwhile, a working group has been convened by the Lord Mayor of Dublin and Minister for Tourism Paschal Donohoe in a bid to restore relations between the GAA and residents living around Croke Park stadium.

Initiated by Mr Donohoe following the debacle of the five cancelled Garth Brooks concerts this summer, the 20-strong group is chaired by the Lord Mayor Christy Burke. Its first meeting took place at the Mansion House on Tuesday night.

Mr Burke said he hoped a “breach-proof” agreement covering all areas of dispute - which may have to be seen by the Attorney General - would be arrived at by the end of June.

It would provide agreed ‘rules of engagement’ between the residents and Croke Park, on such issues as noise control, crown control, litter collection, post-event clean up, stewarding, policing, consultation mechanisms, and complaints and grievances procedures.

He said to work, there would have to be a monitoring committee liaising between parties ensuring it was being adhered to.

Peter McKenna, chief executive of Croke Park - who is on the new committee - said he would like to see an agreement that covered “every day of the week, not just events’ times”.

Describing the events of the summer, where 400,000 tickets for five Garth Brooks concerts had to be refunded after 300 objections from residents, as a “fiasco”, Mr McKenna said a “lot of harsh lessons” had been learnt.

Croke Park has planning permission for three concerts a year and Mr McKenna said there were no plans at present for any more in 2015.

Tickets for next summer’s concert go on sale next Thursday at 9am. The Script will be supported by Grammy award-winning and sometimes controversial artist, Pharrel Williams. It will be the biggest concert to date for the Dublin band and the date falls the week of the 30th anniversary of U2’s first concert in the venue, when they played as part of the Unforgettable Fire tour.

Speaking at a press conference in Croke Park yesterday, lead singer Danny O’Donoghue said it would be a “very special gig...nothing tastes sweeter than an Irish show”.

Asked whether they were nervous about their capacity to sell over 80,000 tickets, O’Donoghue said, “I think we’re more nervous about the weather. We just want everyone to enjoy themselves. The nerves are more about that. It’s more excitement than nerves.”

“There is no better way to put the events of the summer behind us than with a Dublin band playing at the pinnacle of their career.”