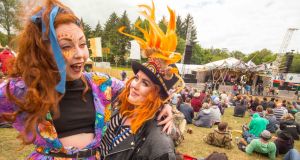 At this year’s Body and Soul festival in Ballinlough Castle, Co Westmeath on June 23rd to 25th, The Irish Times is partnering with the Wonderlust stage for a Saturday-afternoon programme of talks and discussions on media, politics and culture.

The day kicks off at noon with the Women’s Podcast, presented by Kathy Sheridan. It will be looking at the Walk of Shame, and how shame has been used to control women for centuries, from Mother and Baby Homes to domestic abuse, from slut-shaming to body-shaming.

Simon Carswell will be asking Brexit, Trump and the Right: Time to Resist? at 1.30pm. His panel will look at the possible fallout from the forthcoming British general election, what it means as the US simmers in the wings – and will Ireland be caught in the crossfire. Joining him will be Newstalk’s Sarah Carey and Lisa O’Carroll from the Guardian.

Creative Ireland will be under the miscroscope in our third panel at 2.30pm. We’ll be looking at how the project hopes to transform Ireland’s approach to our creative sectors, asking what it means for grassroots organisations, and getting an update on how the story is flowing so far. On this panel will be: CI’s director John Concannon; Mary Hickson, director of Clonmel Junction Festival and Sounds from A Safe Harbour; film and TV director Dave Tynan (Heartbreak, We Face This Land); and Mary Nally, curator of the Drop Everything cultural biennial.

Later in the afternoon at 3.30pm, Patrick Freyne, DJ Sally Cinnamon and guests will be looking at The Hack of Ireland. The likes of Creative Ireland is all well and good, but shouldn’t we just recognise our inner artlessness and embrace the cultural institutions that tell us who we really are as a people? Among the unstoppable forces and immovable objects of Irish culture we’ll be looking at will be country and western music, the Rose of Tralee, the Late Late, and Facebook favourite Does Anyone Know.

And as day heads into evening, Una Mullally will be inviting you to take a soak in the Hot Tub Pride Machine at 4.30pm. The Irish Times celebrates Pride weekend with this exploration of Ireland’s queer Hidden Figures, from butch powerboat racers to queer performance artists, lesbian aristocrats to Irish trans American Civil War heroes. This will be followed by a special Wonderlust Come Rhyme with Me with Vickey Curtis and guests.

At night, the stage will be filled with musical performances from the likes of Crash Ensemble with Katie Kim, Come on Live Long, JFDR Jófríður Ákadóttir, Farah Elle, Selk, Lyra, Proper Micro with DJ sets from Donal Dineen and Sally Cinnamon.

‘It is not clean work to take away my lone defenceless wife’: The killing of Bridget Noble