The 15 best rock and pop concerts in Ireland this week

The Killers, Kris Kristofferson, Elvis Costello and Billy Joel among those performing 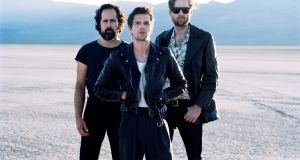 The Killers: the popular US band are playing their largest Irish headline show to date

Elvis Costello & The Imposters
Bord Gáis Energy Theatre, Dublin; 8pm; €66.45; bordgaisenergytheatre.ie
The ticket price is ever so slightly more than the man’s age, but for every euro per year, Elvis Costello will give as much value. The UK-born songwriter cares little for people twittering on about how “old” he is (he turns 64 in August), but there has been a noticeable change recently in that he hasn’t released an album in over five years (since 2013’s Wise up Ghost, with The Roots). Focusing less on the vagaries of securing a record deal and more on live work (although a stage musical is in the works), there is no let up in how dynamic the man can be in a live setting. With a virtually peerless 40-year-plus back catalogue to pull songs from (and a Dylanesque propensity to readjust them), expect a wiry, taut humdinger of a show. Tony Clayton-Lea

Mr Eazi
The Academy, Dublin; €42.20;ticketmaster.ie
Mr Eazi doesn’t come for cheap with tickets for this show costing €42.20. For comparison, tickets to Kiefer Sutherland’s gig are €33.50. Anyway. The Nigerian singer’s music comes with “Ghanaian bounces, Ghanaian highlife, Nigerian chord progressions, and Nigerian patterns” and that’s all up for grabs on his #HappyBoyTour. Bad Vibe, his collaboration with M.O and Lotto Boyzz, is a slow burner of a summer hit, and once you get over the dent in your pocket, you’ll be vibing too. Louise Bruton

Girls Names
Whelan’s Dublin; 8pm; €16; whelanslive.com
Belfast band Girls Names have been around for the best part of ten years, and while the focus has occasionally drifted onto other areas of the creative spectrum (notably, the rather fine side project, Sea Pinks), they have soldiered on to forge their own identity. This month sees the release of their fifth album, Stains on Silence (inspired by a Samuel Beckett quote, no less), which was written and recorded amidst the usual (but no less fraught) turmoil of indie band self-financing, doubt and stress. Good band, good album – go see. TCL

Summer in the City: Picture This
RDS Arena, Dublin; 3pm; €49.90; ticketmaster.ie
Oh, boy – is there no stopping Co Kildare’s Picture This? From playing in tiny venues around the country two years ago to selling out the likes of 3Arena (for two nights late last year) and now the RDS Arena, the path forward looks clear enough for this smart pop/rock band. Special guests on the day include Donegal’s Little Hours, UK singer-songwriter JP Cooper, and UK electro-pop act, Clean Bandit. TCL

Billy Joel
Aviva Stadium, Dublin; 6pm; €136/€70.45; ticketmaster.ie
And still, the Piano Man tinkles those ivories. Although he hasn’t released a song-based studio album since 1993’s multiple Grammy-nominated River of Dreams (in 2001, he released a classical-oriented album, Fantasies & Delusions, on which his compositions were performed by British-Korean pianist, Richard Hyung-ki Joo), Billy Joel has nonetheless continued to play live to an extremely loyal fanbase. One of Ireland’s favourite established US performers, his semi-regular appearances here are always well received. Expect crowd-pleasers such as It’s Still Rock and Roll To Me, Only the Good Die Young, Just the Way You Are, and We Didn’t Start the Fire. TCL

Summer in the City: The Chainsmokers
RDS Arena, Dublin; €49.90 - €54.90; ticketmaster.ie
Just finished up your Junior or Leaving Cert? Well, roll up! Roll up! The Chainsmokers may have the headline slot, filling the surrounding areas of D4 with their soulless EDM-pop, but with support from Rita Ora, John Gibbons, Chasing Abbey, Matoma and Alex & Echoes, your exams will be a distant dream. Throw out the calculator, forget about Robert Frost for now, you have this gig and two whole months of summer ahead of you. LB

Caroline Kay
The Sugar Club, Dublin; €15; thesugarclub.com
Irish singer-songwriter and Snapchat star Caroline Kay made headlines last summer when her debut EP Notes overtook Ed Sheeran and Arcade Fire, and took the number one spot on the Irish iTunes charts. With a background in musical theatre and performance, her Notes & Other Stuff show is bound to feature some Broadway classics, as well as her own tunes, with the assistance of composer Tom Lees on piano. This gig will be the London-based singer’s first ever solo show in Ireland. LB

Riley Pearce
East Side Tavern, Dublin; 8pm; €13; ticketmaster.ie; also Tuesday, Doyle’s, Dublin 2; 8pm; €5 (as part of Ruby Sessions); Wednesday, Róisín Dubh, Galway; 9pm; €10; roisindubh.net; Thursday, DeBarras, Clonakilty, Co Cork; 9pm; €10; debarra.ie
Following his appearance at the weekend’s Body & Soul, Australian singer-songwriter ventures out to do some headline gigs of his own (bar Tuesday’s Ruby Sessions show, which is part of a multiple line-up). By his own admission, Pearce writes “break-up songs for couples on a date”, which gives you some idea of his sense of humour and creative style. Influenced by the likes of Justin Vernon (Bon Iver), Jose Gonzalez, and stripped-down Bruce Springsteen, expect well-crafted songs and well-executed banter. TCL

Summer in the City: The Killers
RDS Arena, Dublin; 4pm; €69.50; ticketmaster.ie
The Summer in the City series of gigs continues with The Killers, a swish live experience with an avid Irish fanbase. Last November’s 3Arena show sold out quickly enough, and if you’re quick about it there’ll be tickets left for this, the band’s largest Irish headline show to date. Ireland likes The Killers and the feeling is mutual – lead singer Brandon Flowers told The Ticket last year that Ireland is “one of the first places where we were accepted for ourselves . . . there have been places and countries where it has been hit and miss, but it has always been a hit in Dublin, always fun.” You know what to do, folks. Oh, and to add to the merriment, the special guest act is Scotland’s Franz Ferdinand. TCL

Roger Waters
3Arena, Dublin; 8pm; €131/€96/€86/€76; ticketmaster.ie; Also Wednesday, June 27th, same venue
Former Pink Floyd member Roger Waters finally brings his Us+Them tour to Dublin, and for many there won’t be an unscrambled brain in the audience as he features songs from several classic PF albums (including Animals, The Wall, Wish You Were Here, and Dark Side of the Moon, a song title from which gives the tour its name). This being a Roger Waters show, you can expect the visual extravaganza levels (and the sound quality) to be top notch – such anticipation is borne out from virtually every review of this arena-size show, which has been touring for months elsewhere. With merely a handful of solo songs performed, this is mostly a Pink Floyd Greatest Hits show. We can’t see too many people complaining about that, can you? TCL

James Bay
Live at the Marquee, Cork; €36.50; ticketmaster.ie
James Bay, the dark raven of the modern indie scene, is stepping away from the tedious stylings of a moody man with a guitar and into a new sound that matches his newly chopped locks. With a three-star review from Lauren Murphy for his new album Electric Light, the English singer is dipping into the more electronic side of things and while there are some excruciatingly embarrassing and dramatic interludes, it will add a boost of life to his live set. LB

Buncrana Music Festival
Buncrana, Co. Donegal; €30-€80; ticketmaster.ie
With a line-up that carries Feeder and Ministry of Sound as headliners, the Buncrana Music Festival is relying on the surplus of craic to keep this festival running. “Tickets essential – these cannot be purchased at the gate. No exceptions,” it reads. “These are available from www.ticketmaster.ie and locally at Mac’s Bookshop, Main St, Buncrana.” Even though the festival is bringing in international acts, it’s keeping it brilliantly local at the same time. Also Saturday, June 30th. LB

Bodytonic & Hidden Agenda Present: Avalon Emerson
Wigwam, Dublin; €12 online/€15 on the door; wigwamdublin.com
San Franciscan and Berlin-based DJ Avalon Emerson makes techno tunes that are spacious but kindly build up enough steam to be classified as house, and she’s known to turn any warehouse space into a rave. She appeared at last year’s Body & Soul festival, on Optimo20’s curated stage, and now she’s back from something a little more intimate and slightly sweatier. Only slightly. LB