Nile Rodgers and Chic at Malahide Castle: Disco is life

Rodgers lets us know how deep his songbook is, playing lots of tunes he wrote for other stars 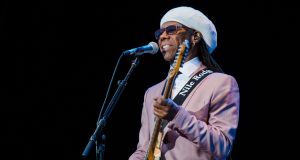 Chic are indestructible. If you don’t believe me, ask anyone who attended Disco Demolition Night. It was Comiskey Park, Chicago in 1979 when White Sox officials, hoping to score some cheap PR points from the disco backlash, disastrously blew up a crate filled with records.

These hucksters tried to decapitate groups like Chic but somehow the band’s heart kept on beating. It’s almost 40 years since that riotous night of fire and nonsense and Nile Rodgers leads one of the world’s biggest live draws. Time has a funny way of separating the legends from the jokers.

Songs like A Dream’s a Dream and Get a Life sound fresh, sunny and timeless. Two guys surely younger than hit single Back to Life sprint towards the stage when the song’s opening notes echo out. This is better than any extreme undercard act has any right to be.

His early-2000s hits might be what the crowd came to see but Craig David is not simply a nostalgia artist. For one, his new songs really pop off here, and two, he’s probably the greatest artist on the planet.

Think I’m being facetious? Ask the guy who bought a ticket just to see David – he almost combusted when the beaming singer gives him a thumbs-up mid-song. Or the security guard who broke from his duties to film the performance of Rewind.

David put together a successful arena tour of his own last year having spent a lot of years lost in a Miami haze, his singing career more or less collapsed. I’m happy he found his smile again.

Chic, though, are unashamed about their nostalgia factor. The band operate these days under the name Nile Rodgers & Chic (or sometimes Chic feat Nile Rodgers). It seems fitting that their moniker has been mutated as the line-up has chopped and changed.

Influential co-founder and bass player Bernard Edwards and drummer Tony Thompson have sadly passed. Plus, they don’t actually perform a whole lot of Chic songs these days. Rodgers wants you to know how deep his songbook goes, peppering the set with numbers he wrote or produced for other stars.

The image of a disco ball swirls on the big screen as Rodgers – decked out in his trademark Kangol hat and a glittering silver outfit, backed by a band in black dresses and sharp white suits – unleash opener Everybody Dance. Most vocals come from Kimberly Davis, a powerhouse singer, and the softer larynx of Folami, the pair’s contrast complementing each other perfectly.

But it’s Rodgers who takes centre stage, unleashing those quick-hand, funky guitar licks that have been such a key component in pop history. Take the medley of Rodgers-penned disco hits, which includes Diana Ross’s I’m Coming Out and Sister Sledge’s He’s the Greatest Dancer.

We Are Family is topped with outrageous bass and guitar solos. Like a Virgin offers a sensual change of pace. Ralph Rolle leads a call-and-response session with the crowd from behind the drumkit that evolves into his best David Bowie impression on Let’s Dance. There’s no wasted motion: everything about the show has clearly been crafted for maximum crowd enjoyment.

Then there is Get Lucky, that ubiquitous Daft Punk number that helped propel Rodgers way back into the contemporary zeitgeist a few years ago. Working on the song coincided with a tough time in Rodgers’s life and the performance is preceded by the star ruminating on his health.

“I am cancer free!” he yells mightily. At the start of his battle right now, sadly, is Alex, a Dubliner recently diagnosed with the disease. Rodgers earlier paid tribute to him. Get Lucky is transformed into a gospel piano ballad before unleashing into the familiar funk jam. A reminder that “lucky” means a lot of different things to a lot of different people.

Shuffling through the hits, Chic are content to play the role of facilitators of classic disco. The band are revelling in their status as a legacy group, which is confusing as they’re actually plotting a new record later this year. The cover of It’s About Time, the first Chic album since 1992, ends up plastered across the screen after the show. Either those new songs aren’t quite cooked yet or Rodgers doesn’t want stop the flow of classics.

Most of Chic’s mega hits – My Forbidden Lover, Le Freak ­– are aired out tonight but I’d have loved to hear a couple of non-chart numbers. The smart ballad At Last I Am Free would have been a real thrill.

They do play I Want Your Love, Chic’s best song, the one that’s got a bleeding heart beneath the beat. It was only last week that LCD Soundsystem performed the track on this very stage. Nancy Whang gave the song the desperate sense of longing that makes it such a classic.

I’ve been thinking about the idiots in the late-1970s and early-1980s who tried to define their own sense of cool by condemning disco to the gallows. Could they not hear the tenderness pressed onto some of those records? The dapperness of the arrangements? Nightclubs have never been happy places, and certainly not in the drug-fuelled New York disco scene on the 1970s, which acted as the setting for Chic’s origin story.

I’ll always love disco because of how it alchemised dance, glamour and beauty while capturing the acidic corrosion of the soul. The best songs to come from the culture sound like broken spirits dressed in a elegant evening gown.

Tonight, Davis takes the lead on I Want Your Love, finding the track’s soulful bottom. “Do you feel like you ever want,” she sings. “To try my love and see how well it fits?” It’s about the distance between landing that would-be lover and being jilted that pop songwriters have been trying to encapsulate since time immemorial. The Edwards-crafted baseline still slaps so hard. Not even the cheesy side to side dance moves of the two-man horn section can deny it.

Disco didn’t die in the late 1970s but it was certainly left for dead – its body laid out in a mangled heap somewhere in an American desert. Personally, I like my disco with grime and hedonism, but tonight is nothing but a good time.

Nile Rodgers is a survivor and has no time for anything grim. His appetite for life is palpable and awesome, and that transcends any guitar lick or horn riff. Closer Good Times sees everyone backstage, whoever they are, join the band so they can help spread the positivity.

By the time Rodgers spits a verse from Rapper’s Delight, it’s a wrap.