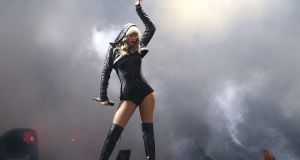 “They say I did something bad but why’s it feel so good?,” sings Taylor Swift to an almost sold out show in Croke Park. When you’re Taylor Swift, there’s no point in worrying about your bad Reputation when you can build an entire album and worldwide tour around it.

On the first night of her two-gig stint in Ireland, she delivers a high-end pop production that sees the former country singer turned pop tycoon, comfortably play the role of a superstar.

In the three years since Swift last came to Dublin with her 1989 tour, her name has been one of the biggest cogs in the celebrity rumour mill. While the 1989 tour featured videos message from members of her celebrity “squad” cooing over their sleepovers and shared love of baking, the Reputation tour is the apocalyptic response to overexposure in the media, thanks to public feuds and famous fallouts with Kanye West, Kim Kardashian-West and Katy Perry.

But instead of taking a meek approach, Swift has taken the snake insult that Kardashian-West branded her with and has grabbed it, brandishing its image heavily throughout the show. And we thought that St Patrick banished those slippery things a long time ago.

...Ready for It? is a song loaded with a punch of a bass line that opens the show under a grey sky that’s broken up by a diluted rainbow. Red flares and fireworks come in hard for I Did Something Bad and on a 20x20 ft screen, Swift pouts and smirks, her lips a Bond girl rouge.

Pronouncing Croke Park correctly, all the posturing of her new bad-girl self disappear whenever she speaks, with her immaculate manners overriding any carefully curated image. However, as a giant, inflatable snake rears its ugly head over the perfectly obnoxious Look What You Made Me Do, this new Taylor makes sense.

Her music takes an industrial turn, her dancing becomes boxy. At times it feels like a Broadway show simply because Swift really does live for the drama, onstage and off. Tending to every inch of Croker, via flying golden balloons and pop-up podiums in the centre of the crowd, she returns to the main stage via the hovering skeleton of a – yes, you guessed it – a mother flippin’ snake.

“This night is all about girl power,” says the brilliant support act Charli XCX in a glittery, cling-filmed tracksuit, before launching into Boys. “I promise you… best crowd yet”, she says. Good luck, Saturday crowd.

Following that daylight rave, Camila Cabello walks onstage like she’s eyeing it up for her own worldwide tour. For extra bonus points, the Havana singer throws on an Irish football jersey when she and Charli XCX join Swift onstage for Shake It Off, which cements itself as one of the best pop songs to dance to in recent years.

Ignoring the sentiment of Shake It Off, in which Swift tells her haters to back the hell away, she ravages up the storm of Bad Blood and Should’ve Said No, two songs battling out different kinds of betrayal.

But that hardness is eased when she sits at the piano and blends 2010’s Long Live with Reputation’s closing song New Year’s Day.

“Please don’t ever become a stranger whose laugh I could recognise anywhere,” she sings softly, showing the emotional delicacy in her songwriting and making the audience feel as if it’s their absence she fears.

With all of the fury and the fire of the show, this feels like a release.

Dipping into the on-the-nose Blank Space, the Reputation tour sees Swift take the fantasy of being the nightmare dressed as a day dream and play it out across the stage.

And as the final chorus of This Is Why We Can’t Have Nice Things rings out, she laughs off the drama of the past three years – and in its wake, she finally shakes it off and becomes a pop star reborn.