The Spice Girls have confirmed they are planning to work on new projects, after meeting for the first time since 2012. Their debut single Wannabe propelled the Spice Girls to fame in 1996 and they split up six years later. Video: Reuters / Virgin EMI 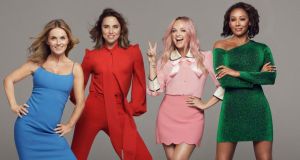 The Spice Girls have announced they will kick off their 2019 reunion tour at Croke Park, in Dublin. The band said on Friday it will take place on Friday, May 24th, 2019. Tickets will go on sale next Thursday, November 22nd, at 9am.

The pop group, who will return to the stage without Victoria Beckham, had been expected to begin their tour in Wales after an extra date at Principality Stadium, in Cardiff, was announced earlier this week. But Melanie Brown, Emma Bunton, Geri Horner and Melanie Chisholm – aka Scary, Baby, Ginger and Sporty Spice – confirmed on Friday that more additional dates mean they will now be crossing the Irish Sea for their first show here in 21 years.

The group, who formed in 1994 and became one of the most successful acts of the decade, performed as a four-piece for two years after Horner quit the band in 1998. They have not performed together since the closing ceremony of the London Olympics, in 2012. Beckham reportedly turned down joining the reunion tour so she could focus on her fashion business.

Demand for tickets has been huge, according to Ticketmaster UK, which said it had recorded its busiest-ever sale on them. After their Dublin performance the band will travel to Cardiff, Manchester, Coventry, Sunderland, Edinburgh, Bristol and, on June 13th, 2019, Wembley Stadium, in London.