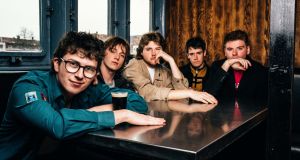 Shame are wary of being tagged a “political” band. Photograph: Jordan Hughes

The world is crying out for angry young people right now and Shame fit the bill perfectly. Bright-eyed and furious, the south London quintet are a picture of youthful incandescence. In their relatively short lifespan they’ve skewered Theresa May, confronted toxic sexism in indie rock and opened up about the high psychological price of breakneck touring.

All of that they have done in the most ferocious fashion, with songs that feel like a smashed bottle against your neck. Here is alternative pop that aims for the jugular and cuts deep. Their music is feral and frantic and, if perhaps not to all tastes, then impossible to shrug off as the latest fad.

“Brexit is fucking ridiculous,” volunteers frontman Charlie Steen, as the group look forward to a sold-out show at the Tivoli in Dublin on Wednesday, November 21st. “I want to try and find a way to get an Irish passport. That’s the golden ticket.”

Our generation has a lot to discuss. If you have an opportunity to shout about it you should

Steen is definitely a frontman rather than a singer. His voice is an impassioned caterwaul – effective but not pretty. Then, prettiness isn’t what Shame aspire to.

This you can discern from Steen’s searing stage presence, which involves the physically slight 21-year-old stalking back and forth, often shirtless, eyes bulging. At a time when ginger quiffs and man-buns are the signifiers of our new rock gods, he’s both a throwback to a rawer age and reminder there is a better way. Music doesn’t have to be safe and polite.

“I was 16 when we started, a chubby little stoner,” he says. “At the beginning, taking my shirt off was a way of confronting my insecurity.”

Like all the best bands, they are at home in their skins but never slick. The angsty guitar lines of One Rizla and The Lick carries echoes of, yet are not beholden to, Joy Division and The Fall. Steen’s lyrics, delivered in a soul-baring snarl, tremble with millennial tension.

“Our generation has a lot to discuss,” he says. “If you have an opportunity to shout about it you should.”

Their calling card in that respect is Visa Vulture, written when May was UK home secretary as a critique of her clampdown on immigrants. Her image adorns the sleeve, her mouth bristling with vampire fangs.

“Oh Theresa, baby / We’ve been going for a while,” sings Steen. “And I think I want more / Than your sideways smile.”

Shame put the track out on the eve of the 2017 UK general election They haven’t been tempted to go back and write an anti-Brexit anthem; in the press release accompanying Visa Vulture, Steen and company expressed the sincere wish that “we’ll never have to pen another Tory-bashing song for at least another five years”.

Visa Vulture is conspicuously absent from their debut album, Songs of Praise. The reason, it is tempting to conclude, is that Shame are wary of being tagged a “political” band – with its implication of slightly dreary worthiness and the aspiration to be the next Billy Bragg.

“None of our songs actually have political lyrics,” says Steen. “Apart from the one we wrote about Theresa May … We try not to overthink things. Everything that has happened has come about quite naturally. We’re not a manufactured band, as you can probably tell.

“The media has tended to cling to whatever we are doing at that particular moment – ‘we’re political’, ‘we’re punk’, ‘we’re from south London’. That’s all true – but it’s part of the wider context.”

Their time has since been occupied wrestling more personal demons. Earlier this year Steen broke rock’n’roll’s code of omertà when telling a British music magazine how the pressure of constantly touring had impinged on his mental health.

“Any band that has to endure the mental strain of sleep deprivation and constant moving will experience that. We gigged and gigged until it broke us – and it eventually broke my mind,” he said, adding that, “this must be one of the only professions in the world where you’ll be shivering in the corner, you’ve thrown up 12 times in one day and you’re basically on the verge of tears – and then a promoter pokes you in the chest and says, ‘Go onstage, monkey, go onstage.’

“Touring is amazing in a lot of aspects,” he clarifies. “But it’s mentally and physically draining. It’s a world of excess. You spend most of the time staring at the wall in a dressing room – three hours fiddling your thumbs. Or you’re at a party. Or else you’re in a van with the same people you’ve been with since you were eight.”

Talk to any older musician and they will express immense relief they aren’t starting out now. For the majority of bands, rock’n’roll was never a road paved with riches. Today, however, financial precariousness is a fact of life for almost every young artist.

“It’s hard work, constantly playing these shows and never making any money. You’re working your arse off all the time,” says Steen. “But then I guess that’s the story of most people’s lives. It’s better than working nine to five.”

Shame, as he says, have known each other since forever, having met at primary school. The shared history is both curse and blessing, he feels.

“There’s never been an end goal or target other than headlining [storied London venue] Brixton Academy. It’s been all one massive surprise. One of the strongest factors in the band but one of the weaknesses as well is that we’ve all been friends since we were kids. It’s like being married to four other guys.

Their entry point into music was The Queen’s Head – a rather grimy-sounding (and now shuttered) Brixton den that became a gathering point for kindred outsiders such as King Krule, Fat White Family and Goat Girl. Those who were there tend to roll their eyes when it’s described as a scene – really, it was just some mates hanging out. But it was certainly something.

“We were very young 14, 15. And we were probably older than a lot of the other acts in terms of mental age,” says Steen. “There isn’t a pub like it in London now, which is quite sad.”

Shame have also been outspoken about the sexism ingrained in the industry. From St Vincent to SZA, there is an argument that most of the best music today is being made by women. And yet they are still under-represented while the business struggles to properly address issues raised by the #MeToo movement. What’s going on?

“Toxic behaviour definitely exists,” says Steen. “You look at festivals such as Reading and Leeds – one of the biggest festivals in Europe and it’s all male, white dominated. It’s still an issue – a problem that our generation is trying to tackle to the extent that it’s allowed.”