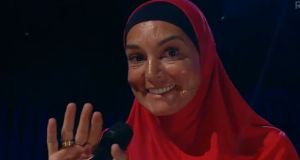 Sinéad O’Connor smiles and waves at the camera after her performance of Nothing Compares 2 U on RTÉ’s Late Late Show. Photograph: RTÉ Player

Sinéad O’Connor made a welcome return to Irish television last Friday night with a captivating performance on the season opener for RTÉ’s The Late Late Show.

O’Connor’s performance spread quickly on social media over the weekend and the resultant video of her singing Nothing Compares 2 U on the RTÉ One Twitter account has now racked up over 1.6 million views. She was backed up by her own band and the Irish Chamber Orchestra.

O’Connor herself seemed happy with the performance and the reaction to it, tweeting: “Thank you SO much to Ryan and to absolutely everyone at RTE and The Late Late Show and in the orchestra and band. I had the best day and night.... and thank you for the beautiful flowers also. And big thanks to my glorious big sister for coming along.

“Wanna say thanks so much for all the love and support received on twitter over the weekend,” she posted on Monday.

O’Connor was interviewed during the same broadcast and spoke of how she felt “at home” after embracing the religion of Islam.

“The word ‘revert’ refers to the idea that if you were to study the Koran you would realise that you were a Muslim all your life and you didn’t realise it. That’s what happened to me,” she told host Ryan Tubridy.

Tubridy asked the Bray singer if she was enjoying being 52 and if she was happy in life, to which she said she now felt like a 17-year-old. She also covered A Rainy Night in Soho by The Pogues during the show.

“Last Friday was a really special moment for us all on The Late Late Show . . . Sinéad O’Connor turned a page for many people watching. Her performance was golden, her interview was thoughtful and warm and I think Irish people seemed to take her to their hearts again,” said Tubridy.

The programme began its 57th season with an audience of 1.4 million people. Viewing figures remained strong for the national broadcaster over the weekend, with 306,000 tuning in for Ireland’s rugby clash with Wales in the Aviva stadium on Saturday. The network’s coverage of the Rugby World Cup will begin on RTÉ2 on September 20th.