Shaun Davey: ‘I got to know where the sweet spot is on the uilleann pipes’ 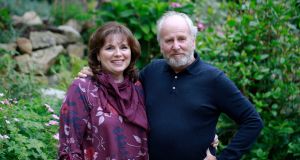 Shaun Davey and his partner Rita Connolly, who will perform in his tribute concert to the piper Liam O’Flynn. Photograph: Nick Bradshaw

As he enters his eighth decade, and after a fallow period of two years, composer Shaun Davey has resolved to “spend the next years writing the best music of my life”.

Not an act for the faint-hearted, Davey’s resolution is born of a lifetime of jettisoning musical boundaries to the wind, and a desire to keep pushing, to see where the music might take him. His forthcoming concert is a celebration of his ground-breaking orchestral work, The Brendan Voyage, and will also feature Hymn to a setting sun: ómós do Liam O’Flynn, with piper, Mark Redmond, and Davey’s wife, singer, Rita Connolly. The RTÉ National Symphony Orchestra’s embrace of the almost 40-year-old Brendan Voyage alongside Davey’s tribute to the late piper who was his partner in so many musical adventures, is the source of much gratitude on his part.

“This concert represents a new beginning,” Davey suggests with his customary tentativeness, “another chance to shake off self-doubt, to try to deal with one’s shortcomings, and return again to the challenge of composing music which combines a symphony orchestra with musicians of other traditions.”

Davey’s role in bringing the uilleann pipes front and centre in an orchestral setting was almost revolutionary some 40 years ago, when The Brendan Voyage was premiered. Many doubted the suitability of the pipes to such a formal setting. But Liam O’Flynn was no ordinary piper, and his unique appreciation “of the arc of a melody”, as Davey describes it, rendered all reservations null and void. And in the intervening four decades, the pipes have inched their way back from the brink of extinction to occupy a central role within our tradition, while confidently taking their place within more formal orchestral settings when the occasion arises. (The adventurous collaborations of pipers, David Power and Neil Martin bear testament to the foundations laid by Davey and O’Flynn all those years ago).

As a self-taught composer, Davey marvels at the arrogance of youth that allowed him to boldly go where none had gone before, when he composed The Brendan Voyage in 1979. He acknowledges that he has frequently suffered from periods of intense self-doubt in the interim, but the death of Liam O’Flynn ultimately was the spur that propelled him forward.

“I had a very busy 2015 and 2016 and after that I was looking at turning 70 and you know, I think I had a bit of a 70-year-old crisis,” Davey reveals with no small degree of vulnerability. “I had no trouble with any of the other decades but I think when you get to 70, you tend to feel: well, my life could be over any day now. And what have I done? And was it any good? There’s a reflection that happens.”

Davey’s resolution to not go gently into that good night arose with a surprisingly volcanic intensity, in January of this year, as he wrestled with O’Flynn’s passing.

“The new piece for pipes and orchestra is an acknowledgement of a debt,” Davey explains, “the debt I owe to Liam, his playing and his belief in me – sometimes tolerance – as a composer. It is not a piece I intended to write, and I don’t think it could have been written while Liam was alive. Certainly not recently, for in the last two years I had lost confidence as a composer and had all but stopped work.

“But in January this year, as I doodled at the keys, something started to happen, a reawakening of the old passion I had for the uilleann pipes. As I played, melodies started to form, soaring, unhurried airs, and I thought about Liam, the way he presented each note on the pipes, and the poise I saw him develop over the years as soloist with an orchestra. During this time, I got to know where the sweet spot is on the uilleann pipes and in some ways where the sweet spot was in Liam as a musician; correspondingly, though we never talked about it – ever – I think he came to understand what motivated me as composer. In our work together he always knew how to play the lines I wrote for him. Even when they were just parts of the orchestration, he played them immaculately, often better than they were written.”

Davey has chosen the form of a Galician alborada for his tribute to O’Flynn. It’s a musical form that Liam loved, and Davey sees it as a perfect curtain raiser and celebration of Liam’s life and music.

“I think it will be a great way to start this concert,” he enthuses. “It starts slowly and it builds and reaches a place of joy, and it takes the audience on that journey, almost from darkness into light. And that’s appropriate because an alborada is a salute to the sunrise. And I really want the audience to experience that at the beginning of the concert. The title Hymn to a Setting Sun is deliberately slightly awry, of course.”

Davey hears two voices in his head when he writes. Liam O’Flynn’s is one, and his wife’s, Rita Connolly’s is the other. The concert will include both formal orchestral pieces such as the Romanian-inspired Tigi Cantabo, with Connolly and Davey’s son, Peadar, singing the male part alongside her, and her daughter, Carla and Davey’s daughter, Ailsha singing harmonies. A family affair in every sense, they’ll also sing songs which Davey has newly orchestrated, from the Béal Tuinne suite, inspired by the poems of the late west Kerry poet and teacher, Caoimhín Ó Cinnéide. For Connolly, it’s a welcome chance to get up close and personal with songs she knows and loves intimately.

“I enjoy singing so much more now,” she says with a smile. “Before, I was worried about making sure I hit every note and coming in in the right places, and all that sort of thing. And that still is a concern, but not in the same way. I don’t care whether people like the way I sing. If they want to hear me, they can come to hear me, but I’m not going to worry about this any more. It’s very freeing, in so many ways.”

For Davey, her singing is central to his musical impetus.

“She still moves me when she sings,” he says. “And when she closes her eyes and goes to that place where she sings from, that, for me, is irresistible.”

Piper Mark Redmond will step into the role which Liam O’Flynn made his own on The Brendan Voyage and is rehearsing for Hymn to a Setting Sun: ómós do Liam O’Flynn with a mixture of nerves and excitement.

“Nerves more so,” says Redmond. “Even though I have it memorised, there are some tricky sections and if the piper switches off, or goes on auto-pilot, it could end up a bit messy. One beat off and over one hundred musicians behind you will be out of sync! Other nerves are created by the instrument. There is always the fear that one of the connecting pipes might pop out or the chanter might pop out, which would be a disaster.

“The last feeling is the honour of being asked to perform this piece,” Redmond continues. “It will always be associated with Liam and he has had a massive influence on me, and still does. He was a childhood hero and I suppose in a way, this is like a dream come true. The combination of pipes and orchestra works so well.”

With David Brophy holding the baton, and Noel Eccles on solo percussion, they relish the prospect of this gathering: it’ll be like a homecoming with old friends.

“David’s the best conductor for a singer,” Connolly says. “He approaches it from a singer’s point of view. He has a deep understanding of what I do, and what Davey does as well. I also think that David’s music comes right from his feet, all the way up through his body, whereas with other conductors it’s hands and head. His is right through his whole body, heart and everything.”

As for what follows? Who knows? But Davey is ready for whatever challenge presents itself.

“I want to climb a mountain, metaphorically speaking, and I think I’m only at base camp,” he muses. “That’s where I am – and I still have something to say.”

Where do atheists get their values?

Anya Taylor-Joy: ‘This guy stuck his head out the window and said, If you stop you won’t regret it'