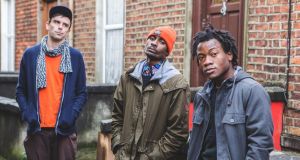 Tea in a Pot Escape Artist Records
★★★
“I’m not from the streets,” Rusangano Family’s MuRli concedes, somewhat unnecessarily, at the outset of the Limerick trio’s latest single. When you’re about to devote an entire three-minute rap song to extolling the virtues of imbibing tea, that admission possibly goes without saying. As far as hip-hop and tea drinking go, the comedian Doc Brown, brother of author Zadie Smith, got the jump on these guys with his YouTube hit My Proper Tea a few years ago. But the Choice Music Prize-winning trio raise the stakes by tucking into a plate of scones before the whole sordid affair is over. They were great at Electric Picnic, too.

Over Everything Matador
★★★★
The opening track from slacker power couple Kurt Vile and Courtney Barnett’s forthcoming joint album, Lotta Sea Lice, is a rambling six-minute anthem that tackles everything from songwriting to social awkwardness. In the video, Kurt and Courtney – that does have an ominous ring to it, doesn’t it? – mime along to each other’s lines, which only adds to it’s ramshackle charm. (Also, for the record, they’re not actually an item. I just felt compelled to coin the phrase “slacker power couple.”)

My Yute
★★★
Blessed are two sisters from south London who’ve turned going to buy something in their local Spar into a whole big drama. Their EP See Through All The Colours is on Spotify now.

Downer
★★★
The Pale White are three vitamin D-deficient ne’er-do-wells from Newcastle-upon-Tyne, and Downer is a depressing new single from their self-titled EP, which is due out on September 29th. All in all, you’d have to say, this does deliver exactly what it says on the tin.