A rap-rock supergroup with ambitions to ‘unf**k the world’ 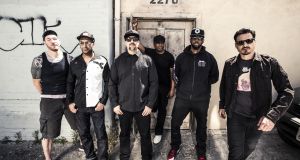 Prophets of Rage: ‘We make banging music that’s saying something about the world’

Chuck D has been around the block long enough to know when an opportunity is worth passing on. But it’s not every day that a musician of the calibre of Tom Morello approaches you with the the idea of forming a supergroup.

Carlton Douglas Ridenhour is best known as an icon of the hip-hop world thanks mostly to his work with Public Enemy, and collaborated with a raft of people including Meatloaf, John Mellencamp, Anthrax and Janet Jackson. But a rap-rock supergroup?

“We were touring with The Prodigy in late 2015,” he recalls, speaking down a crackly phone line from Zagreb, Croatia. “Tom had approached me with some things he thought were disturbing in United States politics, and said he had an idea [to do something] with some like-minded people. He reached out to me through my wife and that’s how the conversation started.

“We had crossed paths on a few other occasions and we had a great respect for each other. [Rage Against the Machine] opened up for us in the early 1990s, when they were a new group, and they went on to make history – but even though this was one of those things that looked amazing on paper, it was a challenge to step up to the plate with the reality of what it should be.

“We all live in the same general area on the west coast. So that made it a possibility to spend the amount of time it takes to rehearse, and to make a solid, concise plan to... unf**k the world, I guess.”

Taking their name from a Public Enemy song from It Takes a Nation of Millions to Hold Us Back . . . the band features three members of Rage Against the Machine – Morello, drummer Brad Wilk and bassist Tim Commerford – as well as Public Enemy turntablist DJ Lord and Cypress Hill MC B-Real. The latter’s inclusion was a dealbreaker, he says.

“I wasn’t 100 per cent on board to know that it was worth it until B-Real became part of the operation,” he admits. “Until I was sure that I could be microphone number two to his microphone number one – then I knew that my role would best be served in making this thing actually work on stage. Me as the lead MC? I couldn’t see myself making the transition from doing what I normally do in Public Enemy to doing something entirely new and experimental. B-Real was more than capable enough to handle the lead and I ended up being a very strong back-up.”

It took time to find the right chemistry in the rehearsal room. “Tim, Brad and Tom are all considered the best in the world at what they do; I think DJ Lord is one of the best turntablists in the world, and with B-Real and myself on the microphone... our legacies speak for themselves. But chemistry is a whole other factor; does everybody dig each other? People don’t always have to like each other, but when an arrangement like this comes along, the respect and liking each other comes second to taking on the challenges of the unknown. The creative process happens off of that, and the live aspect of itself proves itself. There were a lot of rehearsals, finding the right chemistry.”

Like Morello, Chuck D has spent his career making politically-charged songs. Prophets of Rage, Morello is “an elite task force of revolutionary musicians determined to confront this mountain of election year bullshit, and confront it head-on with Marshall stacks blazing”. A gig in Cleveland to protest the Republican National Convention last July kicked off their “Make America Rage Again” tour.

When we speak, the album-writing process is still under way with all six members contributing. So the live setlists are primarily of songs drawn from their respective back catalogues. Was performing the likes of Rage Against the Machine’s Killing in the Name daunting in any way?

“It was unusual to do it at first,” he says. “That was a challenge for me and B-Real, to take apart a song that Zach De La Rocha wrote 25 years ago and re-frame it to the time of now. Because songs last forever, but it was about going in there with a different attitude. Going in there with your own character and putting your own identity into a song like that – that requires work. Nobody’s better than Tom at trying to figure out how it should work – and you need somebody like that, who doesn’t tolerate how it doesn’t work,” he laughs. “That’s what keeps our chemistry difficult in a lot of situations. You must want the pain, know what I’m saying? You have to ask for the pain to make it right.”

Prophets of Rage also needed to write new material rather than rely purely on past glories. Their self-titled album is brimming with righteous anger, bubbling over on songs like Radical Eyes, the barbed Hail to the Chief and the potent Who Owns Who, attesting to the “air of rebellion” that he claims is present in the US right now.

“Twenty-five or 30 years is not long in real life, but it’s a long time in music. So you’ve got to know the difference between the two. And as we’re re-tooling songs that last the test of time, it was important for us to also recognise the times we’re in now and write something about it. Not that we want a catastrophe to be inspiration for new material: no one wants catastrophe in the world, I want the world to be better.

“It’s low-hanging fruit to talk about Donald Trump and Brexit, but you could not ignore that low-hanging fruit – it’s right in your face. So how you creatively go about it is important – and also how you perform it. Making the record is only stage one; there’s five stages of making that record. Number one is making it, number two is recording it, number three is performing it, number four is believing it, and number five is bleeding it,” he says with a chuckle. “If you’re able to bleed a song, then you can convince any crowd. If you’re able to make it to that fifth stage and make it an anthem, it’s all gotta come outta you – it’s not even up to the crowd.”

There is an irony, he agrees, in more seasoned musicians having to come together to tackle what’s going on in the world.

“Well, you wanna always set an example,” he shrugs. “I say that every generation anoints people to set a path that speaks to people, no matter what their age or their gender. I think Prophets of Rage – who surprisingly, have a past in different generations – can come out and set an example for other artists that wanna take this road.

“So we set an example; we say ‘Look, we make banging music that’s saying something about the world.’ ”