RTÉ has reduced its orchestras to a numbers game

The Boaden review says the broadcaster should jettison the NSO 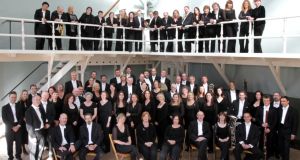 RTÉ NSO: Boaden’s achievement is to have made the unthinkable thinkable – that the broadcaster will lose an orchestra

Sometimes you have to wonder what all the fuss is about. It was late last year when RTÉ management told the station’s orchestral players that there would be only one orchestra by next June. And the Boaden review, commissioned in November, due in February and published on Monday, April 23rd, came up with, guess what, a recommendation that only the RTÉ Concert Orchestra “should continue to be part of RTÉ”.

Last year the hot money was probably on the retention of the RTÉ National Symphony Orchestra. And the report does see a future for the RTÉ NSO, but as an independent national cultural institution rather than as part of RTÉ. The Boaden review’s recommendations have been welcomed by both the Government and the broadcaster. Boaden’s achievement is to have made the unthinkable thinkable. Yes, an orchestra will be lost to RTÉ, but one will survive there, at least for the time being.

This idea is effectively a revival of the kind of proposal put forward in the Piano Report of 1996 – “Piano” stood for Provision and Institutional Arrangements Now for Orchestras and Ensembles. That 22-year-old proposal was rejected by RTÉ on a wide range of fronts. I have a copy of RTÉ’s response from the time, in which it claims that in the event of “the NSO being removed from RTÉ, costs would increase substantially”. And the line against government funding for the orchestra was that – try not to smile when you read this – “Central Exchequer funding is of its nature very precarious, being determined by Government in the light of the needs of the day, and cannot be guaranteed under legislation or statute to the extent of absoluteness.”

The Boaden review is rich in information and runs to 83 pages. Some of that information is quite startling. Take the paragraph concerning the inclusion of musicians in RTÉ’s voluntary-redundancy scheme. Orchestral players have left not just through retirement but also through redundancy. The latter posts cannot now be filled because the closure of posts is what redundancy is about.

The review notes that the inclusion of musicians in the voluntary-redundancy scheme was “sought by the players’ trade union”, the Musicians’ Union of Ireland. That places the union in the extraordinary position of having argued for the abolition of jobs in the profession it represents and thereby inevitably acting to limit its own potential membership. Downsizing the profession, reducing the membership base. I can’t get my head around the union rationale behind that.

RTÉ’s interest in running down the number of posts is much clearer. The Boaden review notes that in 2017 RTÉ explored the idea of amalgamating the RTÉCO and RTÉ NSO into a single orchestra, to be named the RTÉ NSO. The idea was for the new entity to have “the ability to play both classical repertoire and more popular concert-style material”.

The review accepts RTÉ has already decided not to support two orchestras. What this means in relation to RTÉ as a public-service broadcaster is an interesting question

The proposal had a specific savings target (redacted from the report) and a priority “to protect orchestral output for future generations in Ireland”. For RTÉ the redundancies at that time were a quick way of downsizing the overall RTÉ orchestral pool in preparation for a merger.

One of the key considerations behind the Boaden review is to be found in the section titled “Options for reform”. “Our starting position when considering options for retaining both orchestras,” it reads, “is to accept that the financial constraints facing RTÉ are material and the sustainable funding of both the RTÉ NSO and the RTÉCO by RTÉ on its own cannot be guaranteed on the current basis. Thus, by definition, nor would RTÉ be able to fund an option whereby both orchestras are retained by RTÉ and restored to historical levels of staffing and activity.”

In other words the review accepts it as a given that RTÉ has already decided not to support the two orchestras.

What this means in relation to RTÉ as a public-service broadcaster is an interesting question. The public-service remit, of which the two orchestras are a major part, is the justification for RTÉ’s receipt of the licence fee. The Broadcasting Act 2009 states one of the objectives of RTÉ as being “to establish and maintain orchestras, choirs and other cultural performing groups in connection with the services of RTÉ”, although that statement may well turn out to be hardly worth the paper it is printed on.

The Dáil Committee of Public Accounts’ report for last November and December notes its view, in connection with the licence fee, that “it is not acceptable that there is no service level agreement in place” between RTÉ and the Department of Communications, which handed €179.3 million in licence-fee money over to it in 2016. In the absence of such an agreement it may well be that the Boaden-review plan to have the Government pick up the tab will work. The Government may not have an alternative that it is willing to try to enforce.

One of the saddest and most revealing facts in the Boaden review is that the only active RTÉ metric it could uncover in relation to the orchestras’ work was “a simple threshold or target of concert attendees”. Nothing about content, just numbers.

I can’t imagine another public-service broadcaster in Europe has ever dared show such neglect of and uninterest in its orchestras’ work.