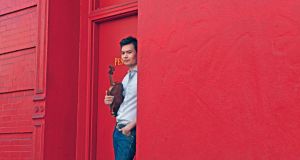 The early all-Beethoven concerts in Dublin in this anniversary year are all picking low-hanging fruit. The choice of Barry Douglas with his Camerata Ireland orchestra falls on the Coriolan Overture, and two piano concertos, the First and the Fifth (the Emperor), with Douglas himself as soloist.

The RTÉ NSO is joining in the Beethoven anniversary celebrations with an all-Beethoven overture/concerto/symphony programme conducted by the venerable Leonard Slatkin. American violinist Stefan Jackiw is the soloist in the Violin Concerto. The concert, which starts at 7.30pm, opens with the Consecration of the House Overture and ends with the Seventh Symphony.

Belfast contrasts with Dublin this week through the Ulster Orchestra’s Ulster Hall concert being a Beethoven-free zone. Belfast audiences, however, will get a chance to hear New Zealand conductor Gemma New in Aaron Jay Kernis’s Musica Celestis, a 1990 work for strings that’s as ethereal as its title suggests. Adam Walker is the soloist in Ibert’s Flute Concerto, and the concert, which opens with Stravinsky’s Danses concertantes, ends with Mendelssohn’s Italian Symphony.

Meet The Hu: the Mongolian metal band conquering the world
7