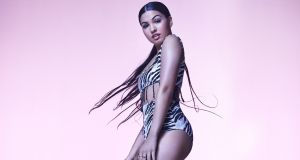 Mabel, daughter of Neneh Cherry, is performing sold out shows in Dublin and Belfast

Cabal 021 w/Decent Perks (DJ Deece b2b Colin Perkins)
Dolan’s Warehouse, Limerick
Making their grand return after the Christmas break, Cabal 021 are setting the tone for the rest of the year. Decent Perks is the combination of DJ Deece and Colin Perkins, who will play back-to-back all night. The Dublin-based DJs dabble in house, techno and disco and between them they’ve clocked up appearances at Forbidden Fruit, Electric Picnic, Lost & Found and Love International Festival. This is bound to perk your January right up. LB

Bounce
Róisín Dubh, Galway
Bounce is a monthly club night for adults with intellectual disabilities hosted by Róisín Dubh on the ground floor. There’s no entry charge to this fun, safe and accessible space for people of all abilities, which runs from 8pm until 10.30pm. The DJs play pop, rock, hip-hop and R&B songs for everybody to get their Monday evening boogie on. Bounce is supported by That’s Life, an arts programme run by the Brothers of Charity Services Galway. LB

Robyn Hitchcock
Whelan’s, Dublin
There aren’t that many songwriters around these days with a musical history that mixes overtly melodic pop with gently warped psychedelia, but this is precisely what Robyn Hitchcock does. The smart reference points are Syd Barrett and REM, but there is also a personalised element that adds true individuality to the music. Pop trivia: among other material, Hitchcock’s father, Raymond, wrote the singularly British sex-comedy books Percy and Percy’s Progress (which were both adapted for films of the same name; the script for the former was written by Irish author Hugh Leonard). Special guest is Irish songwriter and all-round creative malcontent Stefan Murphy. TCL

Mabel
Olympia Theatre, Dublin; also Wednesday 29th, same venue (both shows sold out); Thursday 30th, Ulster Hall, Belfast (sold out)
It can never be easy for an aspiring singer and songwriter to be the offspring of a very well-known pop star mother and acclaimed record producer father, but Mabel has handled the tricky negotiations smartly. Admittedly, from an early age she has had the advice of mama (Neneh Cherry) and papa (Cameron McVey) to call upon, but Mabel is surely her own person – anyone who has heard last year’s debut album, High Expectations, can testify to that. The record racked up a swathe of positive media coverage, too; from “a convincing display of versatility and quality songwriting” (musicOMH) to “effortlessly cool” (DIY), the music and its creator go head-to-head in a winner-takes-all contest. TCL

Tilt
Button Factory, Dublin
Totally Irish Live Tuesdays, or TiLT, is the new free music showcase event that takes place in the Button Factory. Every month, three or four acts are invited to perform and, in the run-up to and after the event, these acts receive pre-production, a professional video of their performance on the night, a day’s recording in Sun Studios and an interview on 98FM’s Sunday night show Totally Irish with John Barker. This month’s artists are Yankari, Fynch and Double Screen. LB

Daughter of Swords
Grand Social, Dublin
Some might presume that writing a batch of songs about a relationship break-up that hadn’t yet taken place is pessimistic, but US songwriter Alexandra Sauser-Monnig knew exactly what was coming down the line. The writing (her own writing, that is) was on the wall, and so, under her new Tarot-inspired moniker Daughter of Swords, Sauser-Monnig recorded Dawnbreaker, an album of quietly devasting contemplation that caught many people off guard last year. “An intimate document of what it means to set oneself free,” it says on her website, and for once you can believe the PR blurb. Something very special awaits. TCL

Pete Cummins
Arthur’s Pub, Dublin
Irish songwriter and singer Pete Cummins is no stranger to the appeal of a finely-wrought roots/country tune – the man has been a substantial figure on the Irish music scene for well over 40 years, with many people of a certain age recalling his Fleadh Cowboys days with much fondness. This gig launches a new music project from Cummins, working with established and experienced musicians such as Garvan Gallagher (bass), Trevor Knight (keyboards) and Paul McEnteer (drums). Tickets (€10) are available on the night from the venue, and doors open 8.30pm. TCL

Dan Deacon
Grand Social, Dublin
Long Island, New York musician Dan Deacon has had his fingers in many musical pies. Since he graduated from State University of New York’s Conservatory of Music almost 20 years ago, Deacon has plays in many groups (including Rated R, an improvisational grindcore band). His graduate studies in electro-acoustic and computer music composition, however, is largely in the area of where he is at. This said, Deacon is the kind of musician and songwriter it would be unwise to try to define. Tracks from his new album, Mystic Familiar, will be unveiled to an Irish audience for the first time during the gig. TCL

Odd Morris
Whelan’s Upstairs, Dublin
With Irish music acts such as Girl Band, Fontaines D.C., Pillow Queens, and The Murder Capital (and a few others besides) raking in the plaudits for their abrasive, vital music, it surely won’t be too long before Odd Morris – now approaching three years old as a going concern, and who have supported at least two of the groups just mentioned – join the terrific next wave of Irish guitar music. This show is the launch for their new single, Cold Water, which continues the band’s preference for grab-‘em-by-the-throat songs with well-phrased lyrics. TCL

Strawberries
The Sound House, Dublin
Back to get us moving and feeling good, Strawberries returns for its third outing. Brought to you by Stevie Flaherty, the co-founder of the queer techno night Grace, this month’s event has Tonie Walsh on decks for most of the night. Playing a five-hour set from his extensive record collection, he will give glory to electronic gems – from Italo disco to Hi-NRG – that have yet to be digitised. The venue will also be kitted out with art installations that enhance the space and vibe of the night. LB

Jonas Brothers
3Arena, Dublin
Six years is a long time in boy band years and that’s the exact amount of time that Nick, Kevin and Joe Jonas disbanded as a band of brothers to pursue solo careers, new musical ventures and marriage. With middling solo careers, steady from the outside marriages and one solid bop (that’s Cake by the Ocean by Joe’s band DNCE), they’ve decided to get the band back together. With new music that is better than what they previously released (See: Sucker), it’s a new dawn for Jonas fans everywhere. LB

Isobel Campbell
Liberty Hall, Dublin
Scottish singer and songwriter Isobel Campbell has such a fine musical background that it’s difficult to know where to begin. Being a member of Belle & Sebastian and then going solo with Gentle Waves would have been enough for any music fan, but then she forged a creative (and by all accounts, artistically conflicted) partnership with US singer Mark Lanegan, releasing three critically acclaimed albums. Latterly bedevilled with music industry problems, Campbell shortly releases her new solo album, There Is No Other, which (as is her wont) full of swoonsome if slightly sombre indie and chamber pop songs. She hardly ever performs in Ireland, so make it your business to whoop your island-of-a-thousand-welcomes her way. TCL

Yasmin Gardezi
Dali, Cork
Last year, the Cork-based, Kerry-reared DJ Yasmin Gardezi landed a residency in Cork, while making regular appearances in Dublin, Galway and Waterford and sharing line ups with the likes of Nina Kraviz, Dax J and Peggy Gou at Life Festival, Boxed off, Yurt City, Indiependence and Mass Festival. Bringing high energy to every set, she meshes industrial techno with acid techno and trance, if that’s your cup of tea. On the rise, she’s one to keep an eye on this year. Entry is €10 on the door. LB

Fred Deakin
Sugar Club, Dublin
Hands up who remembers a pretty damn wonderful UK electronic duo by the name of Lemon Jelly? Between 2000-2005, the duo released three albums, the second of which (2002’s Mercury Music Prize-nominated Lost Horizons) contained their best-known tunes, Nice Weather for Ducks, and Ramblin’ Man. Over ten years after their hiatus (now permanent), former member Fred Deakin pops up with The Lasters, which is described by him as “a proper concept album.” Anyone acquainted with Deakin’s work will know that he invests it with full appreciation of design and execution, so this show could well be something special. TCL

Sturgill Simpson
Vicar Street, Dublin
It isn’t often (actually, we don’t think it has ever happened) that a much-admired roots/Americana singer would ever title an album of theirs Metamodern Sounds in Country Music, or write songs inspired by psychedelic drug advocates, but Sturgill Simpson isn’t your average example of much-admired roots/Americana singers. From Jackson, Kentucky, he is influenced by the likes of Waylon Jennings, Merle Haggard, Willie Nelson, and Dwight Yoakam. He adds such a level of contemporaneousness to his output that Indiewire has described his music as “a mesmerising and sometimes bewildering mix of traditional country sounds, contemporary philosophy and psychedelic recording-studio wizardry.” An artist not be fenced in, then, and because of this, one to definitely check out. TCL