The performances came across with sophisticated poise 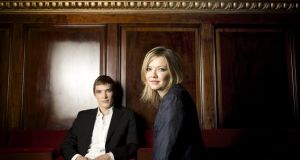 The climax of Music for Galway’s Midwinter Festival, presented in association with Galway 2020 at the Town Hall Theatre last weekend, was a performance of Beethoven’s Kreutzer Sonata given by pianist Cédric Tiberghien and violinist Alina Ibragimova.

Beethoven, whose 250th anniversary falls this year, was the subject of the  weekend, with the focus on works he wrote in his twenties and early thirties. It seemed entirely appropriate that this colossus of a sonata, written in 1802-3 and dedicated to the French violinist and composer Rodolphe Kreutzer (1766-1831), should wrap up the weekend.

The sonata is now the main reason that Kreutzer’s name is remembered. Tolstoy wrote a wrote novella named after it, and the Czech composer Leos Janacek later wrote a string quartet inspired by that novella.

The performances achieved a refreshing blend of rawness, gutsiness and carefully-judged reserve

The work is steeped in issues that we are still dealing with today. The title page of the first edition, published in Bonn in 1805 described the piece as a “Sonata for piano and violin obbligato, written in a very concertante style, almost like a concerto”. And there’s an inscription on a an early version of the first movement which reads, “Sonata mulattica composta per il Mulatto Brischdauer [Bridgetower], gran pazzo e compositore mulattico” which has been colourfully translated as “Mulattick sonata Composed for the mulatto Brischdauer, great lunattick and mulattick composer”.

The violinist in the first performance was George Augustus Polgreen Bridgetower. He was born in Poland in 1778 to a West Indian father and a European mother, and during a visit to England was taken under the patronage of the Prince of Wales at the age of 11.

Beethoven was greatly enthused by the playing of the young violinist, who was just 24 when he joined the composer in the first performance of the work, playing the second movement from the composer’s manuscript, no mean feat given the extraordinary vagaries of Beethoven’s handwriting.

Apart from race and gender, the work also involves issues to do with the notion of the inviolable integrity of the individual artwork. The finale of the Kreutzer Sonata is actually from an earlier work, the Sonata in A, Op. 30 No 1. Beethoven rejected it as being out of scale for that work and, as it were, reverse engineered from it to produce two other movements to match the towering achievements of Bridgetower’s talent.

Music for Galway’s artistic director Finghin Collins was careful to introduced the sonata and two others — as Beethoven did — as being for piano and violin rather than the other way around. And the performances respected that ordering while at the same time achieveing a refreshing blend of rawness, gutsiness and carefully-judged reserve.

One of my earliest assignments as music critic of this newspaper was to cover a Belfast Festival recital by the great Korean violinist Kyung-Wha Chung. The playing prompted me to point out that “Famous violinists are but rarely heard in recital with pianists of equal musical and technical stature” and that while Chung’s musical partner, Jonathan Feldman, was a sympathetic accompanist, “accompanist rather than equal partner” was the role he played.

There was no inappropriate domination in the playing of Tiberghien and Ibragimova, with the violinist showing willing to take the back seat most of the time in the early set of variations on Mozart’s Se vuol ballare, or show reserve in the um-tata violin accompaniments that open the Sonata in A, Op. 12 No. 2, and then get into gear with searing intensity for the impassioned writing of the Kreutzer. These were the kind of performances that allow you to hear familiar works with fresh ears.

Tiberghien was at the heart of Saturday night’s programme, offering the early Variations on Menuet à la Viganò for solo piano, revelling in the glorious texturing of the Quintet for piano and wind instruments, Op. 16 (with Aisling Casey, oboe, John Finucane, clarinet, Hervé Joulain, horn, and Amy Harman, bassoon), and ending with the towering Eroica Variations for piano solo.

The opening concert was built around Galway’s Ensemble in Residence, the ConTempo Quartet. Their playing of the String Quartets in A, Op. 18 No. 5 (the one closely and reverentially modelled on Mozart’s quartet in the same key) and in B flat, Op. 18 No. 6, came across with sophisticated poise in the dry acoustic of the Town Hall Theatre. And the performance of the Septet, Op. 20 (in which three of the ConTempo players were joined by Finucane, Joulain, Harman and Dominic Dudley, double bass), had a relishable thrust and energy.

The Septet was one of Beethoven’s most popular works during the composer’s lifetime. So much so, that he came to resent its success. He would hardly have been glad to learn that when his estate was auctioned the autograph of the Septet sold for more than the autographs of any of his symphonies, concertos, quartets or sonatas. The centuries have validated his judgements over the taste of his time.