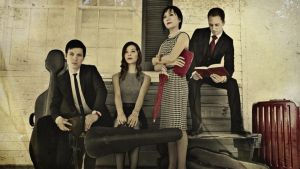 
This concert opens a six-venue Music Network tour by the Attacca Quartet, with a three-part programme that crosses all eras of the quartet repertoire, touching down in the late classical/early romantic with Beethoven, the 20th century with Janacék, and the nearly contemporary with John Adams.

A zippy encore by Haydn shows ease in the style of “the grandfather of the string quartet” and an impressive energy following a demanding programme. The concert exceeds the two-hour convention, as it requires an extra 15 minutes for th em to tamper with other conventions, notabl y the one where string quartets don’t speak to their audience. Each member of the Attacca takes a turn to explain – and illustrate with excerpts – something of each piece they are about to play.

The approach is probably of great value to anyone having little acquaintance with the quartet genre, and is apt for a programme inspired by words. Its centrepiece is the slow movement of Beethoven’s first quartet, Op 18 No 1, his musical depiction of the crypt scene from Romeo and Juliet . Its climax is Janacék’s Second Quartet, intense and propelled by the late-life love of the 62-year-old composer for the twentysomething Kamila Stösslová.

Together for 11 years, the Attacca remain young not only in appearance and spirit, but also in sound. Their playing is light, clean and refined, yet still powerful and large when needed. Even in the intensity of Beethoven’s crypt music, for instance, and in the emotional explosion of the Janacék finale, here they produce a richness entirely without heaviness, but rather an energetic brightness that lights up the church.

They also play extracts from Adams’s 1994 John’s Book of Alleged Dances , “alleged” because “the steps for them have yet to be invented”. They are witty and fun, deceptively easy- going, and American, with inspiration ranging from a shave with a blunt razor to a character from an E Annie Proulx no vel called Toot Nipple, and t he image of an alligator using the escalator at Macy’s department store. The full title of the Pavane movement, She’s So Fine , helps explain its relaxed hint of innocent longing. Touring nationally until Wednesday

Have arts and culture been demoted again?
6