Radical rule-breaking and back to basics

There is a time for artistic licence – and a time to focus on basics of performing: William Brooks on Yeats, and string quartet masterclasses at the West Cork Chamber Music Festival 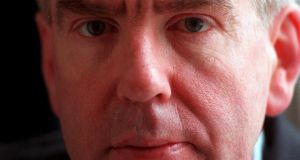 Composer Gerald Barry: not afraid to break his own rules. Photograph: Alan Betson

Composers are cheats. They have to be. It’s what they do. They inherit rules and practices, learn how things should work and how to make them work that way. And then they can throw away the book, write their own rules, and break them should they please.

Years ago, I was invited to a seminar that Gerald Barry was giving for students at TCD. Among other things, he explained how particular pieces came to be the way they were, and outlined the systems he had used to generate material for his piece, Things that gain by being painted, a witty treatment of snippets from The Pillow Book of Sei Shonagon.

The processes he spoke about were straightforward, comprehensible, reproducible. You could imagine doing it yourself as easily as you could imagine alternating sections of material to produce a rondo. The students seemed impressed.

But having set up an apparently watertight system, Barry then tinkered with it, and modified the results. He played the original and then the altered version. The students were perplexed, and one asked why he had made the change. He simply hadn’t liked what he had arrived at, he said, so he made it better. The students seemed shocked, even alienated. They were happier with calculable certainty than with arbitrary creative intervention. One was appealingly rational, the other made them feel cheated.

I was reminded of Barry’s legerdemain by another composer, William Brooks, at a lecture he gave at the National Library last Wednesday, as a prelude to a performance of his Everlasting Voices. The lecture, about WB Yeats and the practice of what the poet called “chaunting”, recounted Yeats’s investigations into the possibilities of having his poetry chanted to the accompaniment of a psaltery, with the instrument used to reinforce key pitches in the melodic pattern of the voice.

You’ll find aspects of this kind of technique in Steve Reich’s Different Trains, the music mirroring at times the pitch and rhythm patterns of a recorded voice. It is also the generating force behind Roger Doyle’s The Idea and its Shadow, which trades on the gradual inversion of foreground speech and speech-generated background musical pitches.

Yeats’s idea was rather crude. It involved a laboriously reached, artificially drawn-out style of intoning words and a less-than-precise mapping of the pitches of the speech for the instrument to lock on to.

Brooks and his collaborators sought to replicate what Yeats had done, except that the psaltery, which caused difficulties in actual performance, was replaced by an autoharp. Brooks’s recreations, as played from recordings at the lecture, were odd to say the least, as if the strange, stretched delivery of Yeats’s own reading of The Lake Isle of Innisfree had been adopted for other texts with extra stretchings and pauses.

Brooks, who holds posts at universities in Europe and the US, has an obvious academic motivation for this research. But he’s also a composer, and the research was a prelude to his Everlasting Voices, which followed the lecture in a performance by the Sound-Weave duo, actor Nuala Hayes and clarinettist Paul Roe.

I can’t deny that the lecture filled me with a certain foreboding about the piece, not least because of the mechanistic processes that had so clearly fascinated the notoriously unmusical Yeats, and the way they seemed to have infected Brooks. But when it came to his own music, Brooks cheated royally, abandoning all Yeatsian strictures, adding a rich electronic sound-track to the live voice, autoharp and bass clarinet, mixing prose and poetry, and even creating a kind of dialogue through a pre-recorded male voice. The Yeatsian stilted delivery was subsumed, and the musical mind and ear allowed to rule.

Masterclasses
The West Cork Chamber Music Festival is more than a long series of concerts. It encompasses public interviews with performers, a forum for instrument makers, a competition for young composers and performances of their works, and masterclasses for young ensembles, who get to play the young composers’ works. I dropped in on some of this year’s masterclasses, all featuring string quartets coached by members of visiting ensembles.

In the musical world teaching perspectives differ almost beyond belief, and not just in relation to the music itself. When a player signs up with a new teacher, a restructuring of the fundamentals of playing technique can be on the cards.

Masterclasses are of the nature of a flying visit. Analysis and advice are given, but there is no real opportunity for monitoring or follow-up. The consequences, though, can be far-reaching.

The messages in Bantry were clear. There were basics to be got out of the way. Do what the composer says. Is there a crescendo there, and if not, why are you playing one? Is there a rest there, and if there is why are you still making a sound? Are you playing what’s in your heart and in your mind, or are your hands and fingers over-riding them with what comes easiest? In other words, is the instrument coming before the music?

The sessions were intense. Social and professional niceties were carefully and quickly observed, and in no time at all the minutiae of rhythm, dynamics and articulation were being put under the microscope. When it comes to nuance and inflection, a second is forever, a couple of milliseconds are the measure of right and wrong, and being out by a tenth of a second can cause a horrendous musical clash.

The tutors I saw at work – Barnabas Kelemen of the Kelemen String Quartet with the Cairde and Chiral Quartets; and the brothers Abel Tomàs Realp and Arnau Tomàs Realp from Cuarteto Casals with the Cepheus Quartet – were fearless. They poked and prodded and persisted until they got results. It’s to the full credit of all the young players involved that they showed themselves to be so adaptable – the playing at the end was nothing like the playing at the beginning.

But, then, nobody was being asked to do the undoable. And it’s hard to resist someone like Barnabas Kelemen when he has you in fits of laughter, exaggerating his own Hungarian accent to show you how Hungarians stress the first syllables in words as a guide to getting the right kind of snap in the rhythms of a Bartók quartet.

Inglorious Empire: what the British did to India
3

Are you a bad guy? Then no iPhone for you, says Apple
9

Pat Metheny: From This Place – A brave step forward from a jazz great
10