Rapper says she is ‘queen of Ireland’, in new Instagram video ahead of Dublin gig 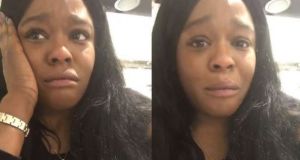 Azealia Banks arrived in Ireland by boat early on Tuesday morning after a somewhat eventful 24 hours which saw her storming off a Dublin-bound Aer Lingus flight from London following an altercation with cabin crew and labelling most – if not all – Irish women “ugly”.

As the 27-year-old rapper got ready for a sold-out concert in Dublin’s Academy on Tuesday night, she announced to the world via Instagram that she was now “the queen of Ireland”.

She was filmed reminding herself and her entourage not to make any reference to Ireland being part of the UK during her Dublin show.

She had kept Irish fans abreast of her travel plans all through Monday with multiple posts on the picture- and video-sharing platform.

On Monday evening she asked her more than 600,000 followers if Ryanair and Aer Lingus were connected airlines.

“Are Ryan air [sic] and Aer Lingus the same thing? Trying to rebook my flight but I’m afraid it may be one of those shared code flights... I’m going to make it to Dublin. Do not worry,” she said.

She then decided to take the ferry from Holyhead to Dublin instead of flying and posted clips along the way, including one showing herlost on the ferry’s car deck and looking mournfully for her “chauffeur”.

Although she took the boat, she was able to assure her followers that she had been given “clearance” to fly with Aer Lingus but chose not to.

Ms Banks also took several more swipes at Irish women in her Instagram Stories: “I had enough of y’all oompa-loompa looking, spray-tanned, crazy-looking b****es tonight. The girls have scurvy, they’re vitamin deficient, need some calcium tablets...” and repeated a previous assertion that they were ugly.

And she marvelled, in a particularly colourful clip, about the physical attributes of the Irish men she had seen thus far on her journey.

Her travel plans attracted the attention of Conor McGregor who sent her a supportive message via Instagram to which she responded with an appeal for help and a claim that she was being bullied by Irish people.

She then called the Rose of Tralee Kirsten Mate Maher ugly, a post Ms Maher responded to with a kiss.

Ms Banks’s Instagram posts suggested she was happy to have finally arrived in Ireland, a full 24 hours later than planned. She seemed unapologetic about the incident which had seen her leave an Aer Lingus flight, where she claimed she had been treated like a “wild animal”.

She said she was on the Monday morning flight from London Gatwick to Dublin when “the lady is like asking me some f**ing questions... Since I didn’t have an answer for her, she went like a couple of seats over and she was staring at me. And I’m like, ‘Girl don’t stare at me. I didn’t fill out your Aer Lingus work application form’.”

Banks and her travelling companion then elected to get off the plane after which her luggage in the hold was removed.

Like all airlines, Aer Lingus trains its staff in managing hostile situations and dealing with difficult passengers.

Typically cabin crew across all carriers are taught to be aware that flying can be difficult for people and cause stresses that are not evident in every day situations.

They are advised to be empathetic but extremely strict when it comes to behaviour they regard as abusive, and are encouraged to retain authority but not provoke passengers.

“At Aer Lingus, the safety and security of our guests and crew is our first priority,” a spokeswoman said. “We have a long-standing, strict no-tolerance policy towards disruptive guest behaviour and, to this end, provide extensive training to our crew on how to handle such situations, which is refreshed on an annual basis.”