Róisín Murphy: ‘Here I am. Warts and all’

Róisín Murphy’s new album Take Her Up to Monto is named for a song about Dublin’s former red-light district. “It’s a little postmodern fragment, a bit of history. But also it’s me.” 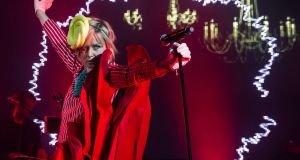 Róisín Murphy “This has been the happiest time of my life, and that’s all that matters”

When Róisín Murphy performed at London’s Royal Albert Hall with New Order in April this year for the Teenage Cancer Trust, the charity asked her what advice would she give to her 16-year old self. Murphy’s beautiful reply? “The weirder you are now, the happier you’ll be later.”

The Arklow-born singer has made a career out of being weird in the most wonderful of ways. When she was 16, she went to Sonic Youth and Stone Roses shows in Manchester and danced the nights away in the Hacienda. The inspiration for the title and concept behind her most colourful and weirdest album yet, Take Her Up to Monto, comes from the famous song about Dublin’s red light district around Montgomery Street (now Foley Street). It was written by the late Irish Times music critic George Desmond “Hoddy” Hodnett, and later popularised by Luke Kelly and The Dubliners.

“My uncle was a photographer for The Irish Times,” Murphy says. “He shared Hoddy’s passion for music because he was Ireland’s number-one aficionado on jazz and they’d go to jazz gigs and festivals together. There are all sorts of fragmented ideas going on at once, which really drew me to him. For me, there are these complexities of whether this is an Irish record, or ‘am I Irish?’ and so on. There are all sorts of historical and political fragments.

“Take Her Up to Monto is a very satirical song. I don’t really like people calling it a folk song because it kind of isn’t. It’s a bit cheeky calling it Take Her Up to Monto, but the whole idea was to be very irreverent. My da used to sing Take Her Up to Monto to me when we were walking down the street – he still does actually – because it’s got a walking tempo, and I still sing it to myself when I’m walking along. So it’s a little postmodern fragment, a bit of history. But also it’s me. It’s my way of saying, ‘How’re ya lads? Here I am. Warts and all, this is me.’”

Take Her Up to Monto is Murphy’s second album in the space of 15 months, hot on the heels of the Mercury Prize-nominated Hairless Toys. Since releasing the six-song collection of Italian songs, Mi Senti, in 2014, Murphy has released a record a year. She’s enjoying a prolific patch after a hiatus following Overpowered in 2009 when she took time out to have children.

Murphy says she didn’t stockpile songs over the years, but was always writing and generating ideas. “I collect words and phrases and cut things out of newspapers and keep scrapbooks and write down ideas in my phone or 10,000 notebooks all around my house,” she says.

“It’s not very organised, but I keep collecting, so I did have a lot of material to help me to write songs. More importantly, the biggest production decision I make is who I’m going to work with, and in this case I chose Eddie Stevens.

“I’ve got a shorthand with him because I’ve worked with him for 20-odd years in live music and Moloko records, but I never sat down to make a record from scratch with him.

“We have a lovely free and easy humour between us. We’ve shared so many experiences together on the road. There are songs across these two albums that were very difficult to put together and other ones that are more or less there in their raw form.”

Murphy is taking Monto out on the road with an appearance at Dublin’s Longitude, following her recent, acclaimed Glastonbury slot. “It was great and I had a fantastic time. I didn’t stay very long and I left at 2am to get back to my babbies, as I didn’t want to stay the whole weekend. I went over to Block 9 afterwards, which is the new gay quarter of Glastonbury. It’s amazing. They’ve built all these film sets and tower blocks and a meat-packing district. I sang a couple of songs there, so that was great too.”

Playing Ireland is a completely different kettle of fish.

“I’ve several hometown gigs with massive guestlist headaches,” Murphy says, laughing. “Dublin, London, Sheffield and Manchester are all hometown shows for me, but the guestlist headache in Ireland pips them all, really. Your third cousin twice removed crawls out of the woodwork, and so-and-so’s mother, who did such-and-such a favour years ago, wants to send nine of her poor starving children. My dad might know a gay guy and he has to bring him along just because he is gay. ‘Ah Róisín, c’mon! He’s gay. Please, he’s from Enniscorthy. Would you just give him a ticket and get him a boyfriend?’”

Murphy is already plotting her next album.

“Like everything else I try, it always feels like I might fail or start something I don’t finish. In an ideal world, I’ll keep them all coming for a bit longer. I’ve taken on the creative direction across two campaigns now and it’s tough, hard work and a lot of responsibility. Yet all I can say is, the last couple of years, going around London with my big phone taking pictures of everything, watching, writing: this has been the happiest time of my life, and that’s all that matters.

“Right now, I’m a performer who is fascinated with performance on any platform. I’ll just continue to explore. I hope it’s a realism that makes you feel good about being alive.”